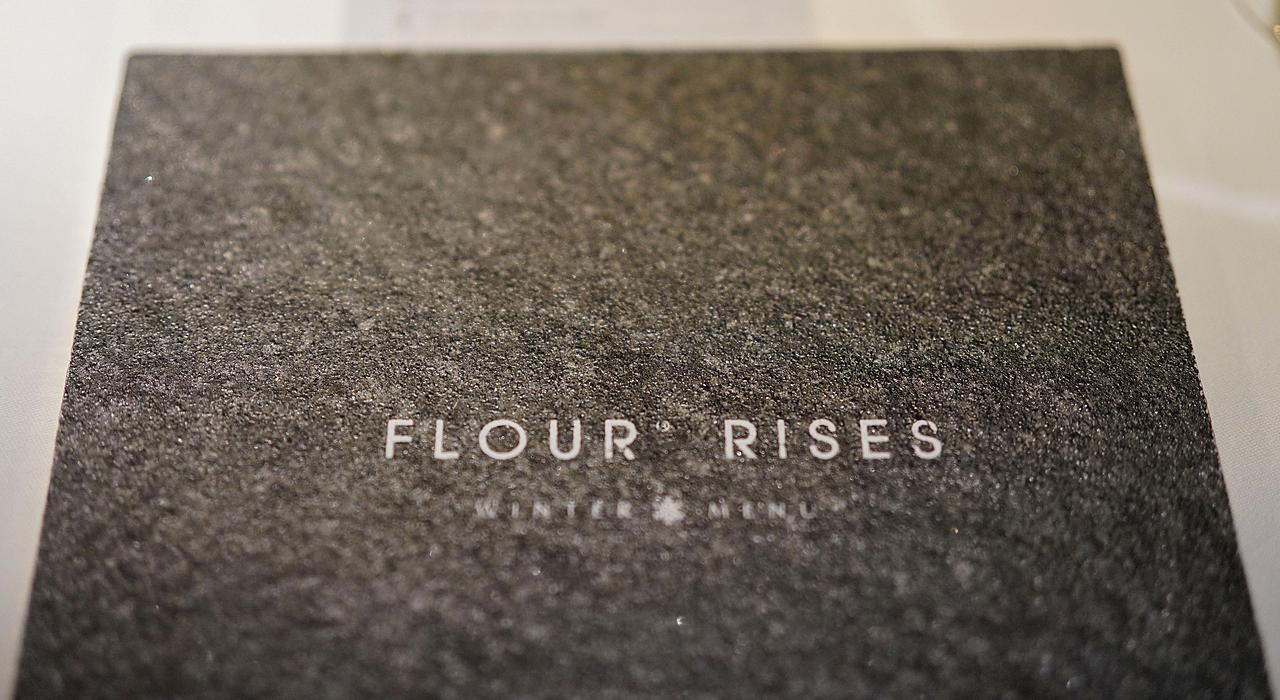 When India's landscape comes into conversation, many of us visualise sweltering cities whose millions of residents endure intense heatwaves, sprawling coasts where monsoons bring heavy rainfall, or steamy jungles which inspired Kipling to write about Mowgli, Bagheera and Baloo.

Those locales have birthed the food that evokes India across the world - from the tiffins of Maharashtra to the thalis of Gujarat, the tandoori chicken of Punjab to fish curries of Kerala.

But this country of 1.4 billion people stretches beyond those boundaries.

The Indian Himalayan Region is one of the subcontinent's crucial territories, with peaks that supply water to mighty rivers throughout India, arching from Himachal Pradesh, the Province of the Snow-laden Mountains, toward the Tibetan Plateau.

Here, winter is the most challenging time. In Shimla, the summer capital of British India, about 2,200 metres above sea level, it's early in the season but temperatures have already plunged below freezing at night.

That context is what makes the new degustation menu at FLOUR an exciting expedition. Titled Charcoal, it offers a glimpse into India's winter surrounding the Himalayas, when charcoal cooking promises the heat that keeps body and soul alive, through months when even the hardiest spice, fruit and vegetable retreat from the frost.

FLOUR's chef-founder Yogesh Upadhyay and his team show how charcoal cooking isn't just about infusing food with smokiness. This is not a barbecue dinner, Yogesh stresses - it's about how the technique of cooking with charcoal breathes different dimensions of taste and texture into diverse ingredients, from cauliflower to venison.

If you've been considering a visit to FLOUR but haven't made the leap, now's the time: This is the restaurant's best menu so far, served exclusively through February. A menu inscribed in marble ushers us into the evening, a divine reminder of FLOUR's distinction in its details, captivating us before we even take a bite.
It's been exactly two years since Yogesh revealed that FLOUR would fold in its first location in Bukit Damansara and rise anew in the city centre. But like true flour, what accompanies that rising is as important. FLOUR has been irrevocably shaped and kneaded by the tumult of 2020 and 2021, tested by fire that melted the resilience of too many restaurants.
FLOUR's evolution has forged its survival. Each time we return, its changes are measured in its culinary craft, in how the kitchen takes fresh risks that pay off boldly.
The familiar FLOUR opener of Earth & Sea, previously a layering of beetroot thoran topped with Baerii caviar, is completely revamped this time.
Earth & Sea now tastes like a cloud afloat over a beach, a cumulus of coconut milk espuma, dotted with delicately creamy Beluga caviar, looming large this season with a 3.6-millimetre grain size, harvested from huso huso sturgeon openly bred in Iranian waters of the Caspian Sea. It's paired with jaggery-sweetened, charcoal-cooked buckwheat flatbread, gluten-free and typically consumed this season to keep the body warmer for longer. The luminous, legendary Dom Pérignon 2010 is the recommended wine pairing.
FLOUR's malleability extends to the rest of the winter menu. When we tried it in early December, one of its earliest courses was Egg Must Be Crazy, a fun, funky not-an-omelette, egg that was charcoal-cooked on an iron plate, lined with mimolette cheese, from-the-tandoor pineapple sauce droplets, shimeji mushrooms, radish and white truffles, coupled with a battered courgette flower transformed into a blue cheese popper stuffed subtly with green lentils. But that 65-degree Egg, elaborate and elusively fluffy, proved ephemeral - Yogesh has since replaced it with another course, a surprise for future patrons. FLOUR's winter menu harnesses two Asian-sourced charcoals - mangrove wood charcoal from Taiping in northern Malaysia and oak charcoal from Japan, more commonly known as binchotan, used at respected Japanese kushiyaki restaurants.
Both burn cleanly, with differing levels of efficient, flavourless heat, letting the food shine without being obscured by smokiness. For this meal, the Taiping charcoal takes centre stage in the tandoor, the binchotan on an open grill.
Yogesh reiterates that patrons should expect completely different flavour profiles from what Indian food is recognised as in Malaysia. What he crafts is a representation of Indian culture, not Indian cuisine.
Few things at FLOUR are what they seem - the next course is called This Is Not A Soup, even though it looks like one. This is Yogesh's take on thukpa, the Tibetan-origin noodle soup with variants in northeastern India's Sikkim state, which borders Tibet, Bhutan and Nepal.
While traditional thukpa is often submerged in chicken or pork soup, FLOUR eschews the meat for a velvety veloute of root vegetables of turnips, celeriac, carrots and radish that has been smoked, thick as sauce, poured over portobello mushroom that emerges moist, fresh and full-bodied from 90 seconds  in the tandoor, butter-brushed and paired with slow-digesting pearl millet bread. A recipe of rustic roots, refined, with a Szechuan pepper spiciness that soothes as much as it smoulders. 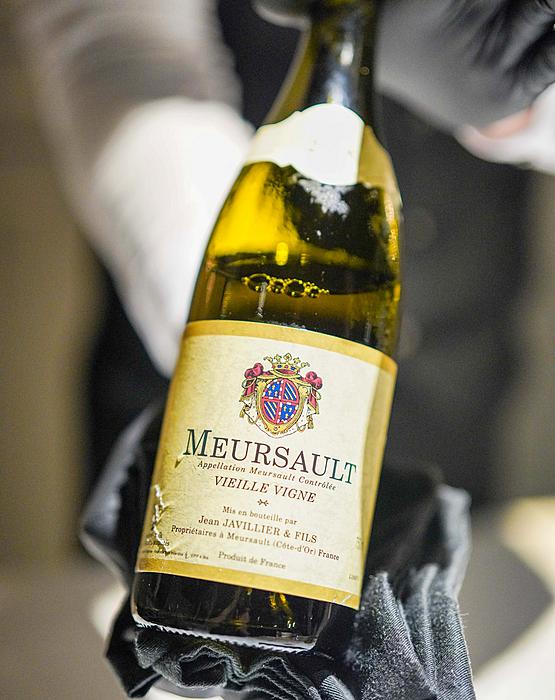 The next course surfaces as lightly golden green pea foam with whiffs of rosemary and oregano, mysteriously concealing something beneath the bubbles - three-hour sun-dried Spanish octopus tentacles, braised and tandoor-barbecued for the charcoal-cooked element of this ensemble, thoroughly tender, sliced and laid over Spanish pimenton cream and a mash of cauliflower, representing one of winter's staples. Its flavours are pronounced in each spoonful that brings everything together, persisting vividly in the memory after over a week. Monk With An Apple reminds us of missed opportunities, of a journey we had planned to Kashmir in September 2019, with our flights to and accommodation in Srinagar all booked before the region was abruptly locked down in August.
Thankfully for the people of Kashmir, normalcy was mostly restored in early 2021 after an 18-month security and communications lockdown.
November marks the end of the harvest season in Kashmir's famed apple orchards, with the green and red fruits then consumed throughout winter.
FLOUR distills this theme into a brightly tangy, vibrantly ginger-warmed green apple sauce that cushions a binchotan-grilled monkfish fillet, as firm as lobster - as lovely a marriage of fruit and fish as we might find, from the Kashmir Valley to the Klang Valley. Indians Make Pasta? takes us to another disputed region, Ladakh, where winter's comfort food consists of skyu, a stew of handmade dough balls boiled with vegetables.
FLOUR parlays that into its own pasta made of barley, thumb-pressed and rolled, with a chew like gnocchi, in a ragu of root vegetables laced with caraway seeds and aniseeds.
Our nights in KL will never be as bone-chilling as in Ladakh's capital of Kargil, where the depths of winter take the thermostat to −20 °C, but FLOUR's skyu is still a balm for the spirit, soulful and satisfying, as reassuring as a hug and embrace from Yogesh. Meat seizes the spotlight for our climactic two courses, Comfortably Numb and The Hunt - but nothing as predictable as chicken, duck, beef or lamb.
First, Spanish suckling goat - fed purely on its mother's milk, having eaten neither grain nor grass - arrives unvarnished, all meat and bone in its primal, juicy glory, pristinely charcoal-charred in the tandoor, spiced lingeringly not with chillies but cloves.
Pick your piece up with your fingers to gnaw at its straight-from-the-farm succulence, rich and robust with a rising heat. Everyone that evening receives a different part of the same goat, for a shoulder-to-thigh experience that channels a communal feast in the Himalayan heartlands. 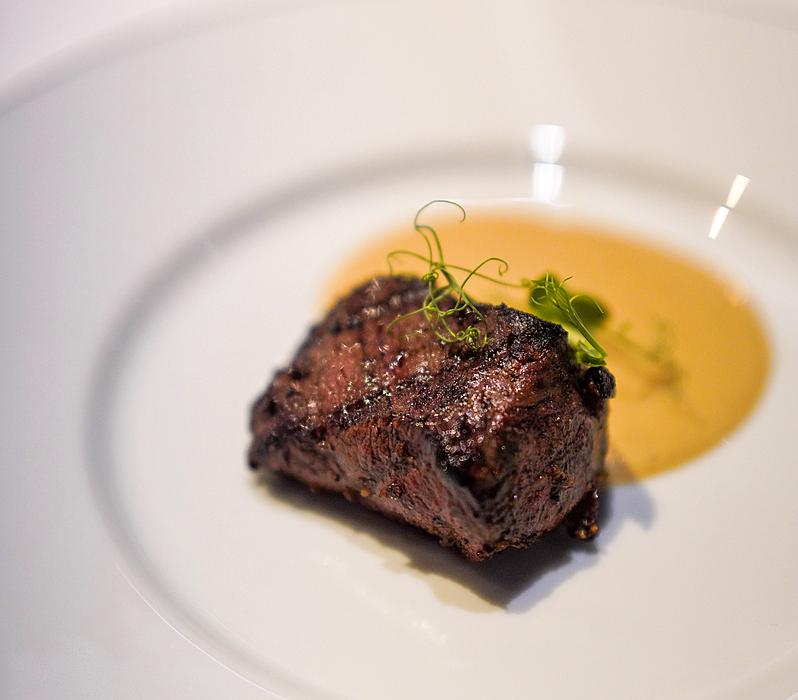 Our next course continues in the tradition of northern India, a trek clockwise from Kashmir to Ladakh and onward to Himachal Pradesh, all on the brink of the Himalayas.
Here, the Himalayan white-bellied musk deer thrives on the alpine altitudes, its population dwindling nonetheless after decades of hunting for its musk.
FLOUR concentrates its focused charcoal cooking on non-endangered Spanish venison, yielding a muscularly hunky, meaty steak, grilled from raw to finished on binchotan, with no modern sous-vide interludes, enhanced with Manali chillies for winter-battling heat, pepper and true-to-the-theme rock salt. As triumphant as any beef tenderloin, complete with FLOUR's own secret sauce that beats a béarnaise. 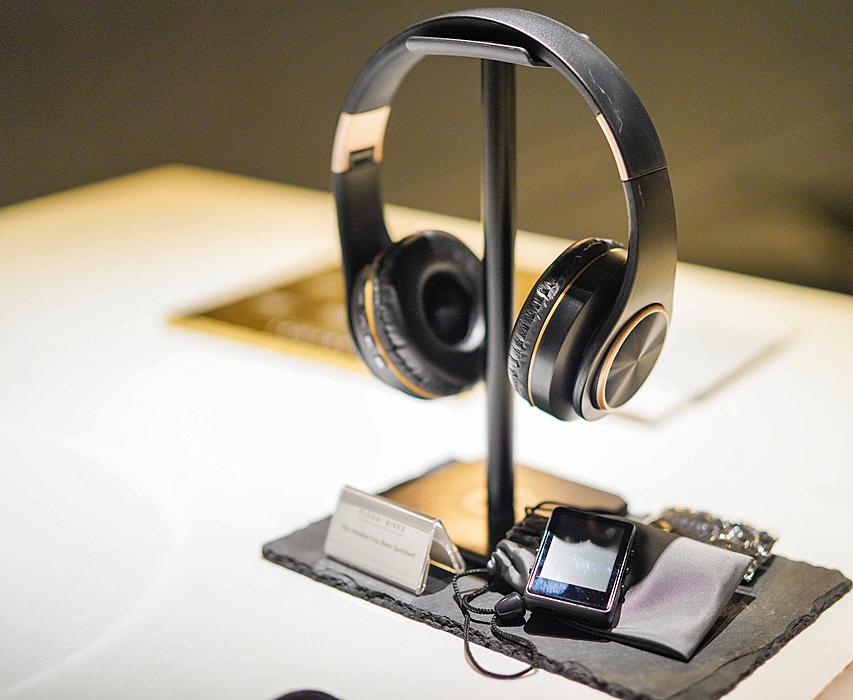 The mood turns meditative toward dessert, as each guest puts on headphones plugged in to Lisa Gerrard's Now We Are Free, her three-octave contralto soaring to temporarily liberate us from the soul-crushing, heartbreaking madness of cosmopolitan life.
It's an immersive, sweet soundtrack for a creamy swirl of sultanas with Hennessy XO, a Christmas rum cake released and reconstructed without the bondage of sponge, cushioned by strawberries soaked in Dom Perignon Champagne, fastened with a cocoa-walnut tuile.
This is followed finally by Really? - a treat with the respite of no added sugar, charcoal-caramelised roasted sweet potato mash with sesame praline, and a digestif of single-origin Kelantan chocolate with Hennessy XO.
With this menu, Yogesh makes the leap from chef to conductor, orchestrating an intricate suite of concepts and creativity, weaving the connective threads into an uncharted harmony that's complex but compelling, apart from but still a part of India as we know it. It's a madman's maddening vision, like a 1,000-piece jigsaw puzzle of the Great Himalayan National Park.
Now, after blazing a brave trail to the heights of the Himalayas, where can FLOUR go next? 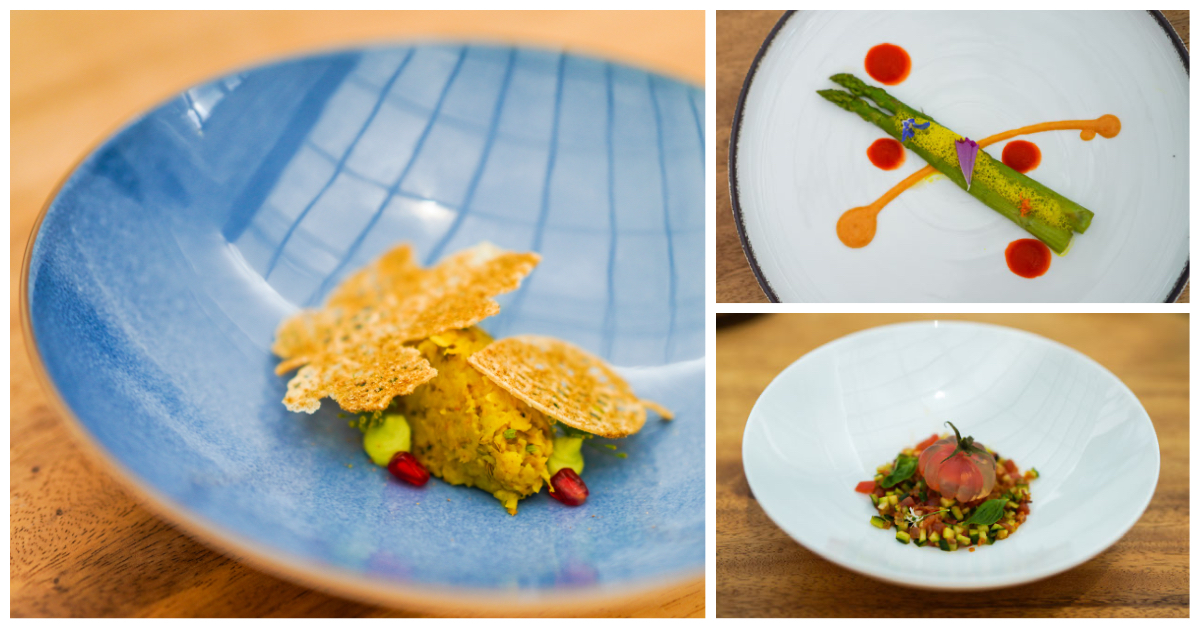 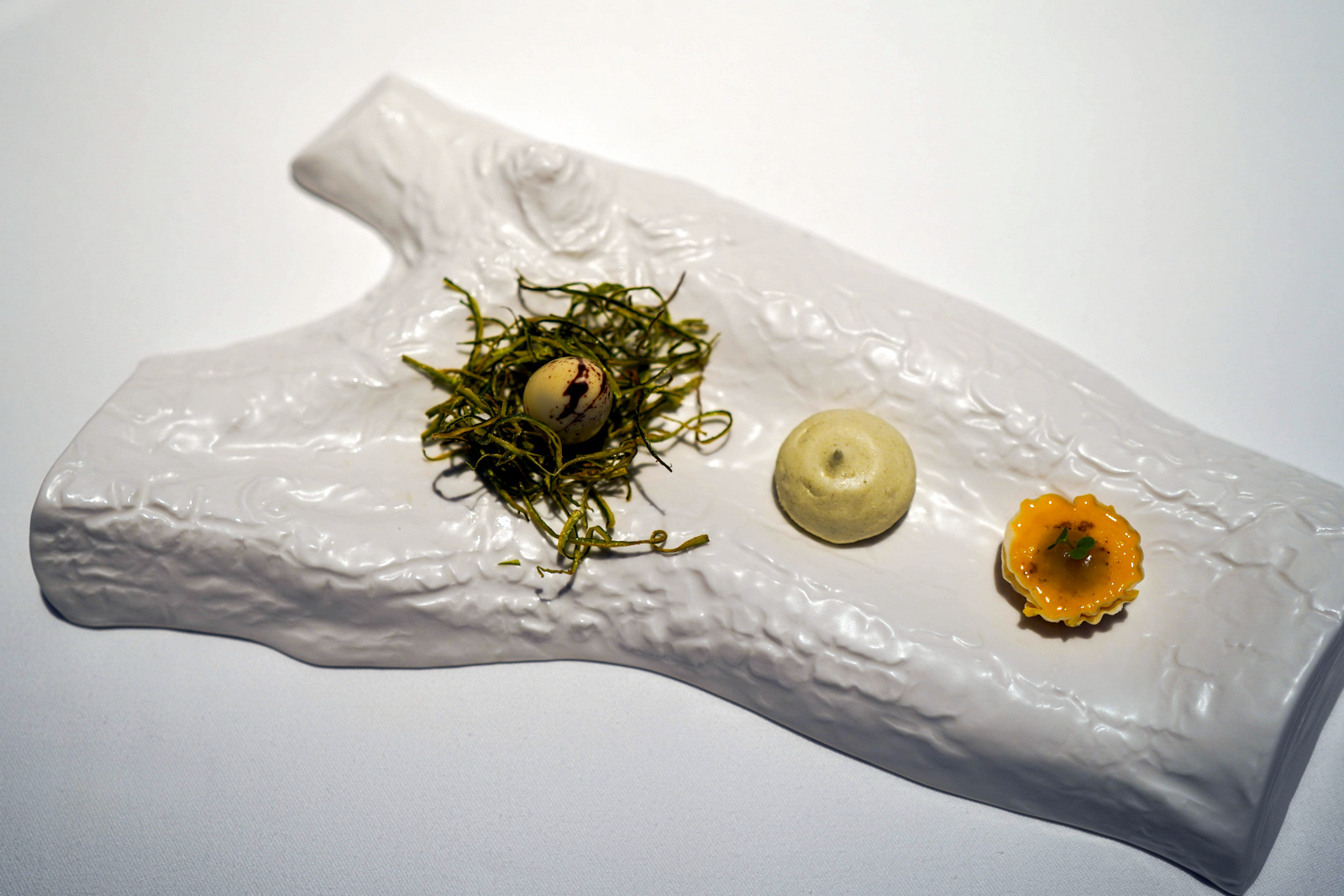 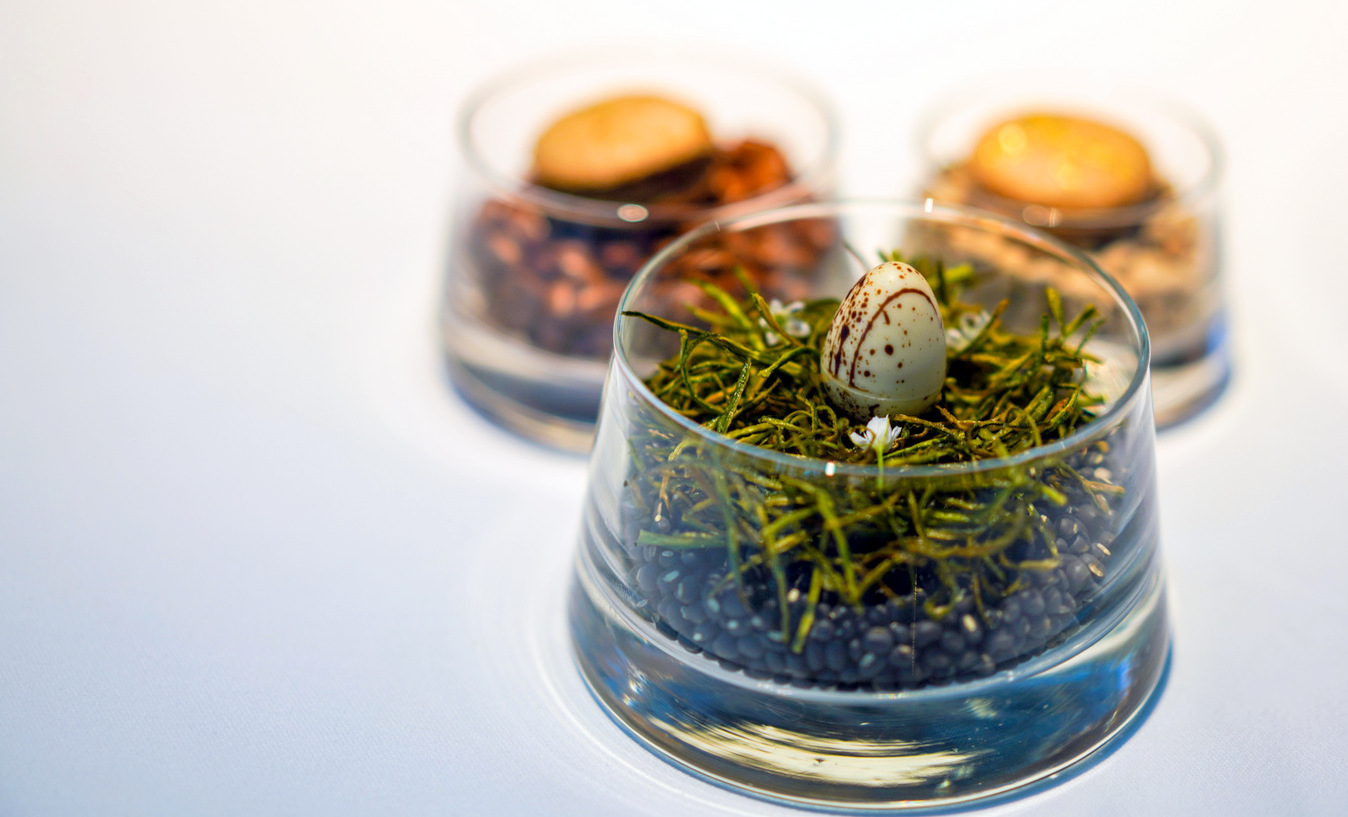 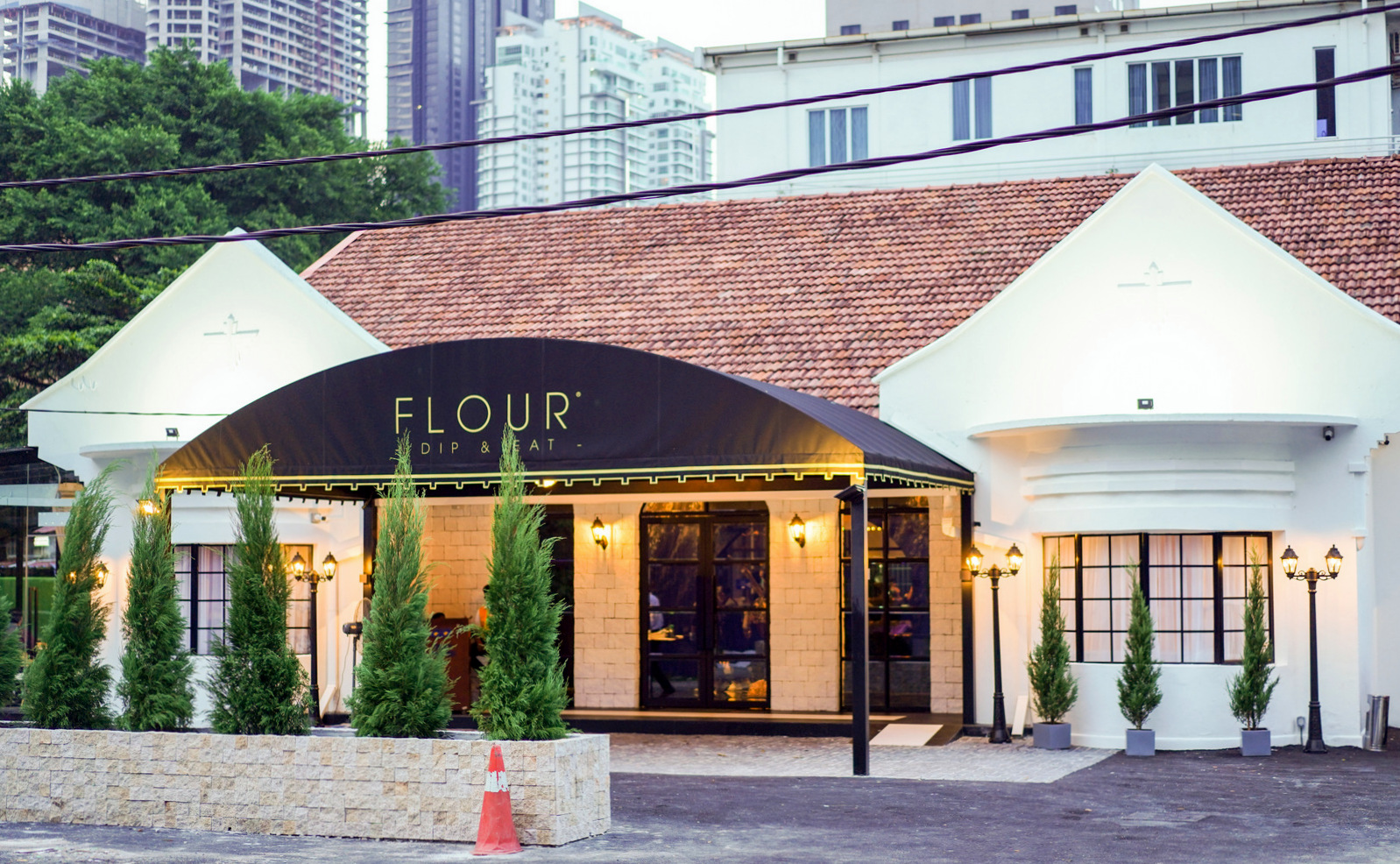