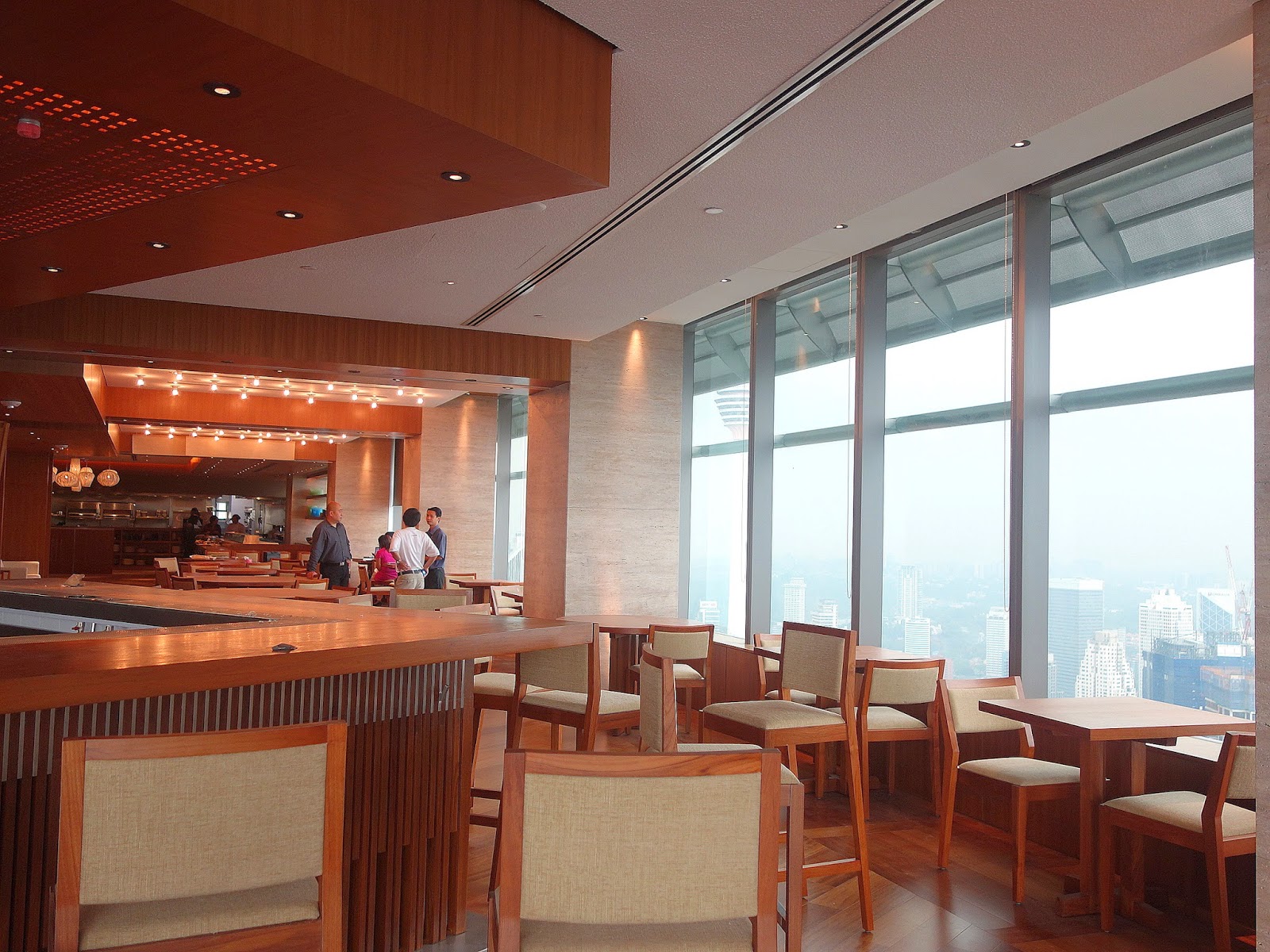 Southeast Asia's first Nobu is poised to launch in KL within a month, bringing the world's most recognised name in Japanese restaurants to Malaysia. Here's our early peek at what's happening on the 56th floor of Menara 3 Petronas, where one of 2014's most mightily anticipated new establishments is steadily taking shape.
Note: These photos were snapped while work was still in progress; the furniture remained in disarray, the windows were dusty & numerous fixtures hadn't been installed. Expect a more lustrous setting once Nobu opens by the second week of August.
August Update: Nobu's official opening has been postponed to September. 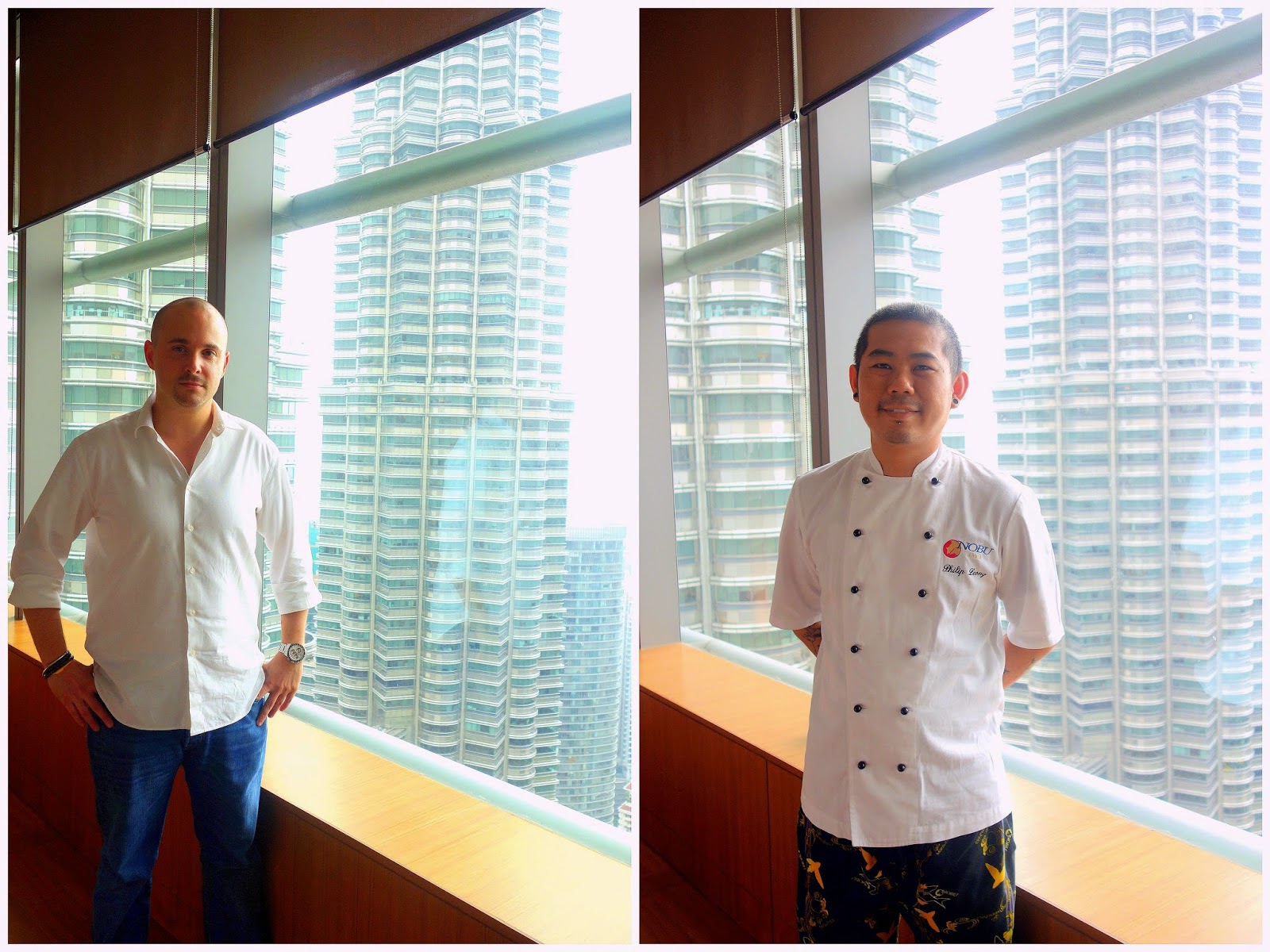 We had the chance to catch up with the two very friendly men who'll spearhead Nobu Kuala Lumpur _ head chef Philip Leong, an Ipoh-born Malaysian who's worked at London's Nobu Berkeley St since 2005 (& as head chef there since 2012), & general manager Stephane Heard, who has been part of Nobu in Paris, Miami, Las Vegas, Hawaii, London, Mexico, Moscow & Dubai over the past 14 years _ for their first in-depth interview on what Malaysians can expect from Nobu KL.
Will Nobu co-owner Robert De Niro head here for the restaurant's launch? What will prices be like? And what's Stephane & Philip's favourite Japanese outlet so far in KL? Read on. 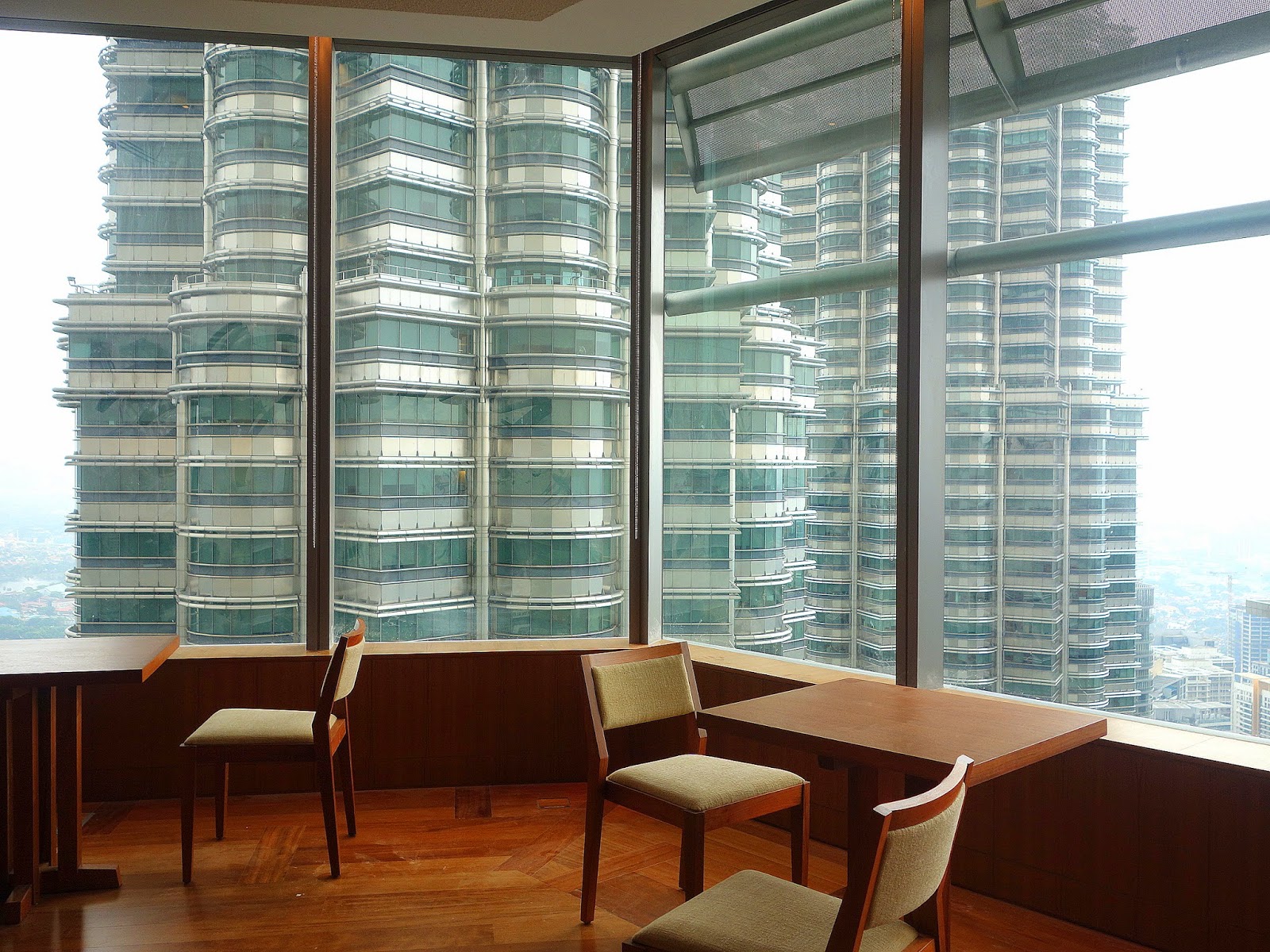 Eat Drink KL: Welcome back to Malaysia, Philip. You've been gone for a long time.
Philip: Yeah, I've been away almost 12 years in London.
Eat Drink KL: Could you tell us how you became a chef in the first place?
Philip: I actually got my first degree in architecture. Then I took a gap year, went to New York, and that's where I fell in love with Japanese cuisine. I practised architecture for three years, then I decided, OK, this is not me.
I like cooking, I like experimenting with food. The theory is still very much like architecture though, like building a foundation. That applies to food as well, you have to go layer by layer.
At Nobu, I started as a commis (basic chef) in 2005. There were a lot of new ingredients involved, especially Peruvian ingredients. As a commis, I had no idea what they were. It was a lot of hard training; we had to appreciate every detail - plates that we served had to be polished properly, we had to take care of our tools. Very basic things.
Eat Drink KL: What prompted you to return to KL after all this time?
Philip: Basically Nobu-san (founder Nobu Matsuhisa) approached me & said, OK, we're opening in Malaysia, would you be interested? I said, of course, it's my home country & I want to come back & bring in my experience in Nobu to the people here, including the local chefs by sharing my knowledge with them. Most of our team here are locals.
Stephane: For the front of the house, I actually brought in three managers, two from New York who are Malaysian-born & went to New York a few years ago. I also brought in Gopi from Nobu Dubai, who was one of our captains.
I started very low in Nobu as well, as a commis bartender in early 2001 in Nobu Paris, and eventually made my way up. I've done a little bit of all the areas in Nobu & moved on to different locations. 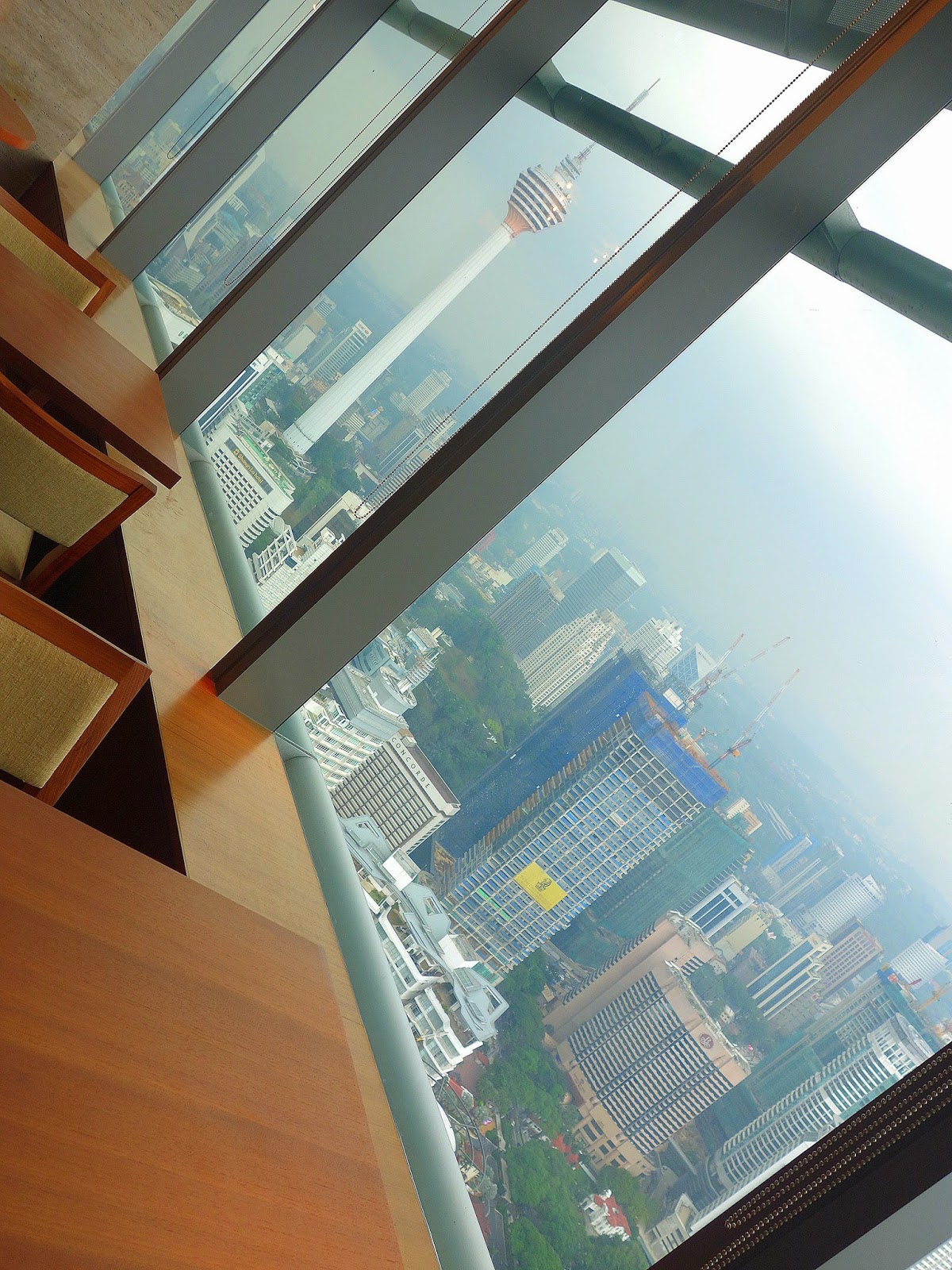 Eat Drink KL: What makes Nobu KL worth noting, from your perspective?
Stephane: This is the first location in Southeast Asia. We faced a few challenges bringing products into Malaysia. A lot of products that Nobu uses throughout the world have not been available yet in Malaysia. So this is why we're going to bring a different experience to diners in Kuala Lumpur; we are bringing produce that a lot of people who don't have a huge international exposure haven't tried before.
Philip: Especially with the Peruvian products, they're very, very new in this country. During the last three months, while I was sourcing suppliers & asking around, I don't think we could find any Peruvian products in Malaysia.
Stephane: The way Nobu's cuisine merges those South American flavours with Japanese cuisine, I think it's something that's very unique in Kuala Lumpur as well. We really want to open people's minds; Nobu is all about inspiration & passion, he works with his heart. All his chefs started from the bottom & made their way up.
Philip: Whether you're in Melbourne or in London, all the signature dishes will be exactly the same. But maybe in the future, we will use some local products as well, maybe chilli, maybe 'cili padi,' it depends.
Stephane: We have to make sure _ this is very important to us _ that the standards are always the same, whether you go to Kuala Lumpur or Hong Kong or Los Angeles.
Philip: Nobu KL will be pork-free though.
Stephane: But we want the experience to remain the same throughout all the Nobus. Obviously though, our design changes from location to location. Here there is a lot of wood, low ceilings _ usually this is something we don't have in Nobu. There's a bit more of mixture of texture as well within the furniture.
And obviously here, you have the view, which is unbeatable. You're in the heart of Kuala Lumpur, you've got an amazing 360-degree view. This as well helps to create a different atmosphere. But the service standards & the concept remain the same, obviously, throughout the world. 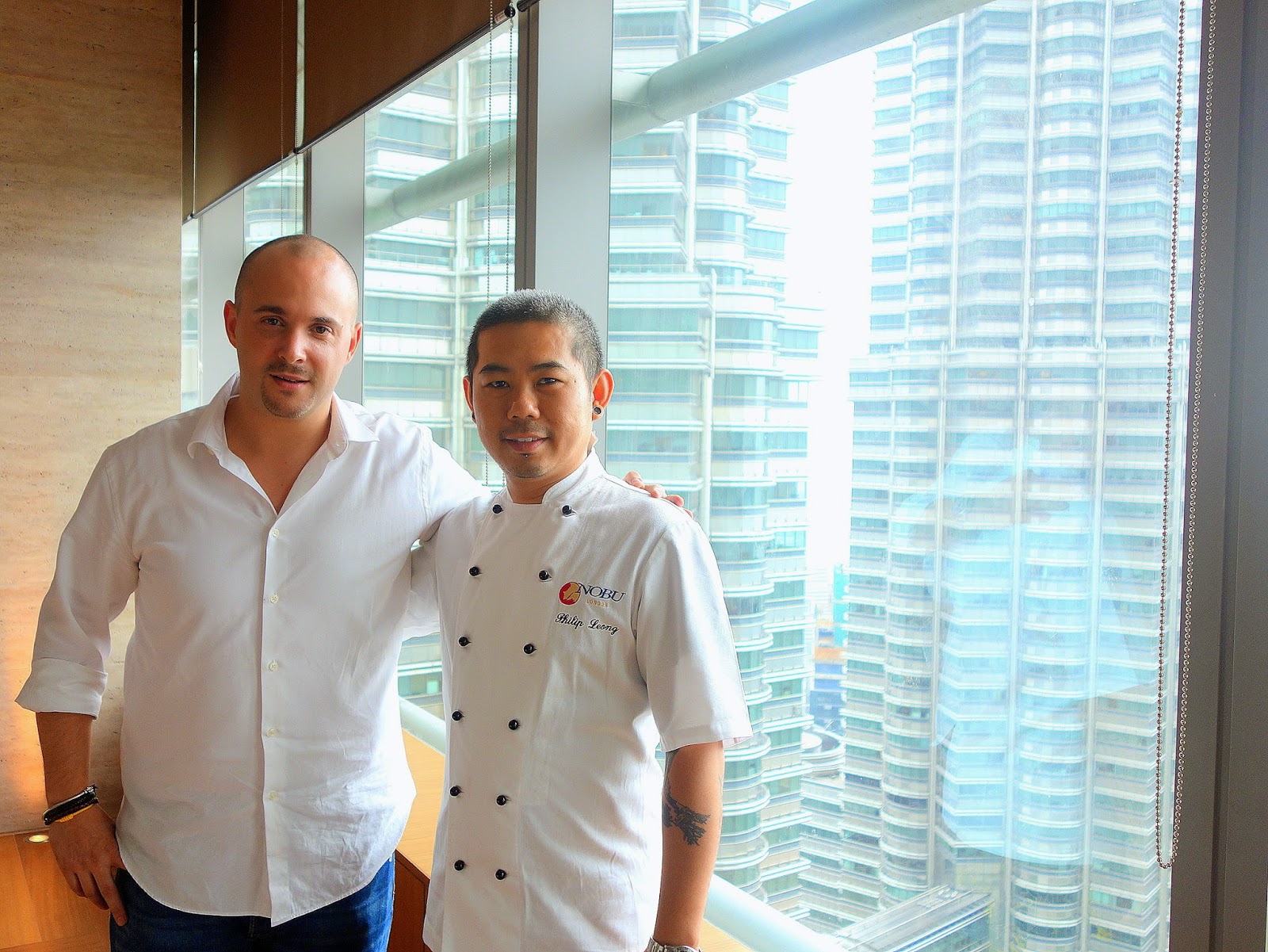 Eat Drink KL: Have you guys managed to go around & check out other Japanese restaurants in KL?
Stephane: Yes, we have, & some of them are amazing. My personal favourite is Ten so far. We mainly focused on the sushi bar, the quality of the fish & the knife skills of the chef, & I was very impressed.
Philip: Very good products. For Japanese restaurants, we always focus on fish that is fresh. Ten is the one so far that I've tested that's perfect, really good. 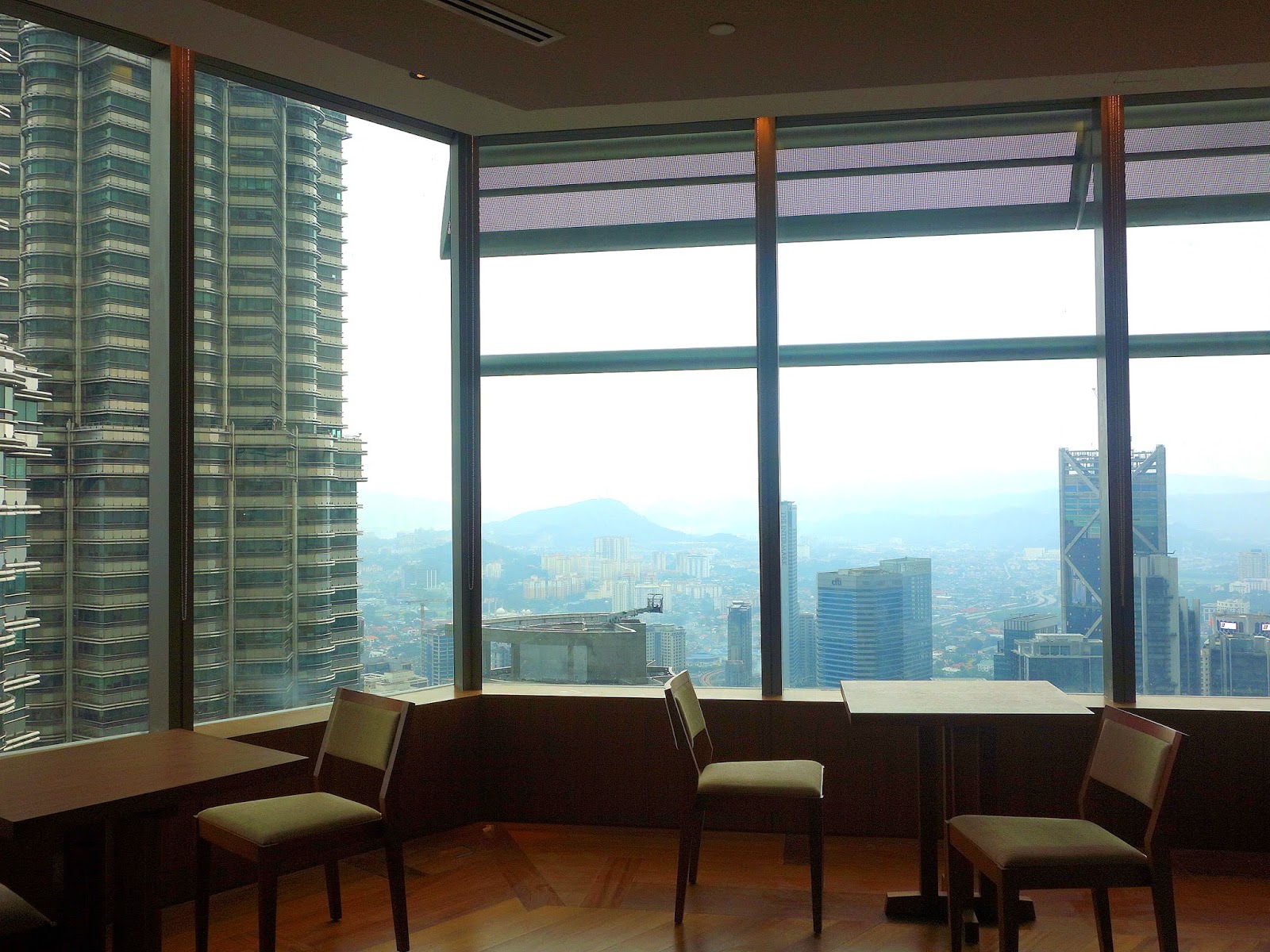 Eat Drink KL: Is there extra pressure on your part, Philip, being a Malaysian boy & coming home, to fulfil expectations?
Philip: Yeah, there are quite high expectations, but after years of working with Nobu in London, I'm confident about bringing my experience to Nobu KL.
Stephane: So far, staffing was the huge issue for us, especially in the beginning. It seems to me that a lot of Malaysians working in the hospitality industry fly to Singapore or Macau. There is a lot of talent still over here, but it was very hard for us to staff both the front of the house & the back of the house. We actually ended up recruiting some different nationalities.
Philip: Funnily enough, on the chefs' side, when I interviewed the locals, when I asked, have you heard about Nobu, do you know about Nobu restaurants, most of them said they didn't know. It's quite challenging. When we're hiring chefs, we expect a higher scale & a great knowledge. But I'm still quite happy with our young team. We can educate them in the Nobu way, which is very good.
Eat Drink KL: Do you know how the decision to open in Malaysia came about in the first place?
Stephane: Nobu-san & another one of the partners came here to visit Kuala Lumpur & really fell in love with the city, with its energy, the people, the street food & the way people are really passionate about food in Kuala Lumpur. This is something that's really important to Nobu-san; he wants to be some place where people can appreciate food. So we think Kuala Lumpur was a no-brainer for him. 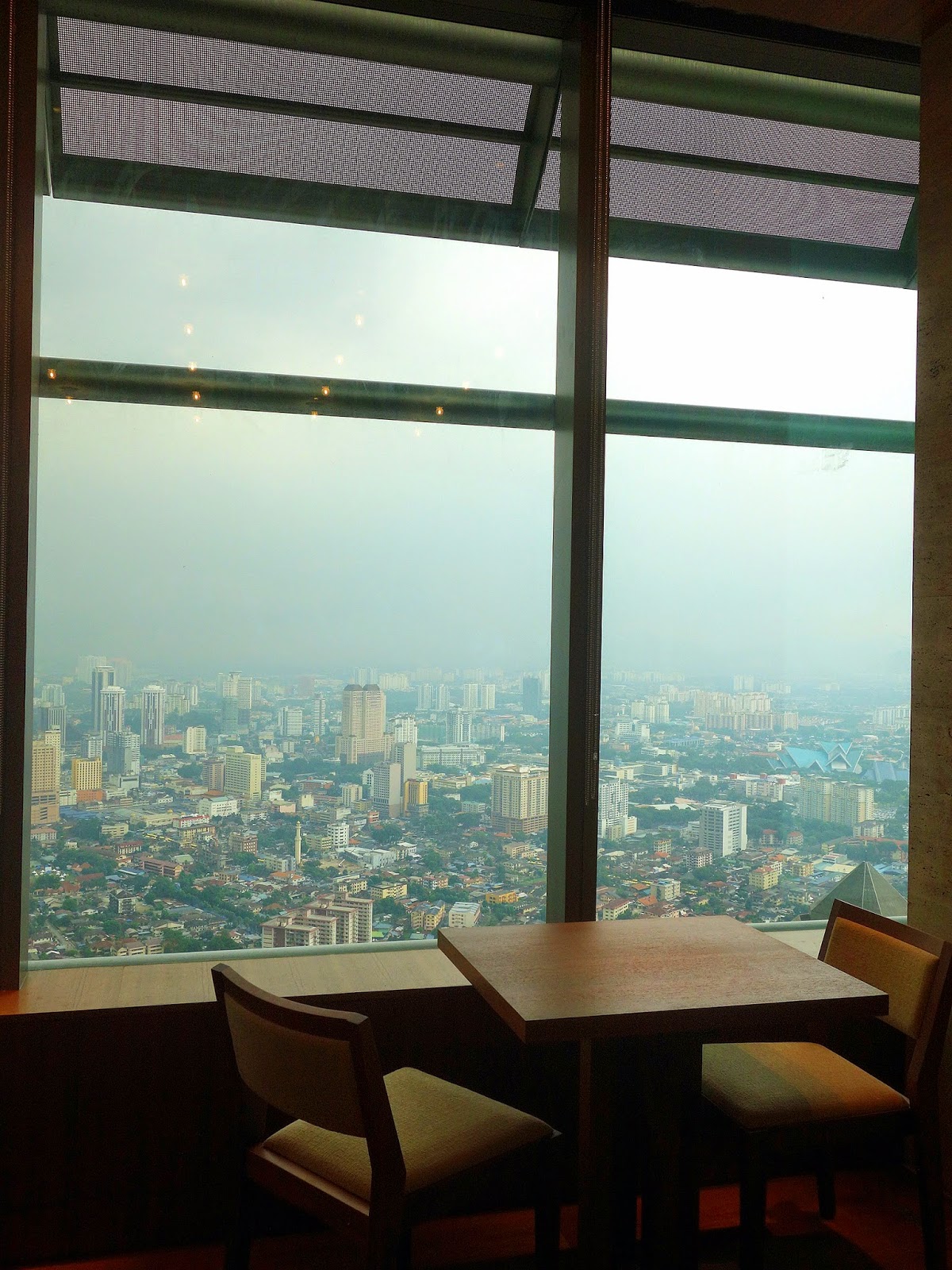 Eat Drink KL: What will prices be like at Nobu KL? That's a concern for diners, especially at Japanese restaurants.
Philip: We have to put up a reasonable & affordable price for everyone. We've done research around KL, & our prices will be more or less around the market price range.
Stephane: I think we're right on the competitive price point. In the beginning, we were a little bit scared, we were like, oh my God, our price point is going to be very, very high, because our cost of items was very, very high. But then, we've been here for about four months, & we've met a lot of suppliers, & we managed to find the best quality, flown in more often, every week. We get fresh fish deliveries flown in from the biggest market in Japan three times a week. So we've managed to have a great relationship with our distributor, making sure we get the best quality for every single product. 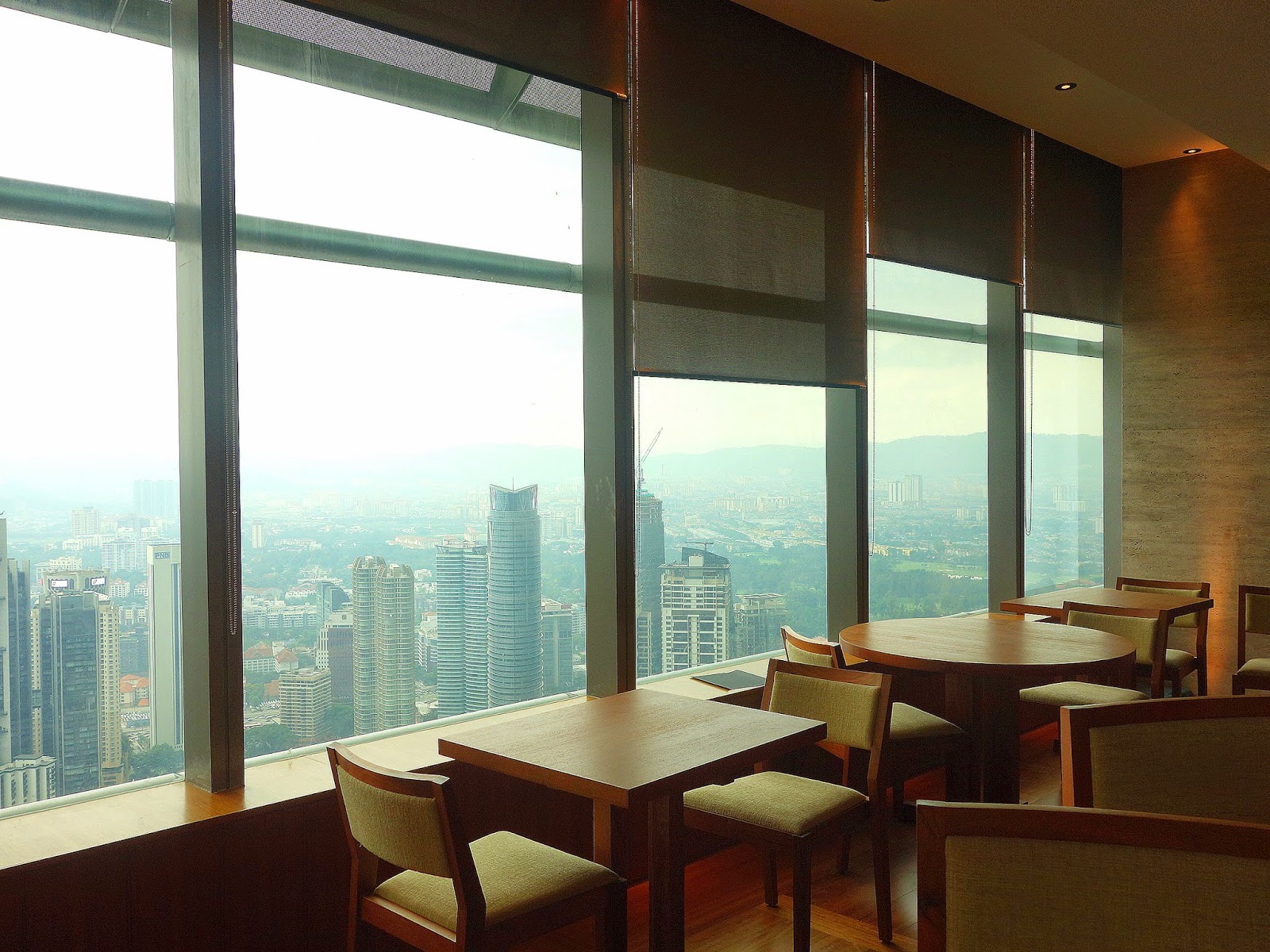 Eat Drink KL: What are the plans for Nobu Kuala Lumpur's grand opening?
Stephane: We usually do a sake ceremony when we open a Nobu. It's sort of a blessing of the place. This is usually done with all the owners, the partners. They come in; we have this beautiful sake barrel made out of bamboo. And they all have bamboo hammers. We fill up the barrel with the best sake we have in the house. They all break the barrel at once, & then, we all serve the sake, & all the partners share the sake with the guests. Each & every one of them does a toast.
We haven't set the date yet. We're looking probably at the end of September. Nobu-san will be here of course. Robert De Niro, we have to work around his filming schedule, which is a little bit tight this year. 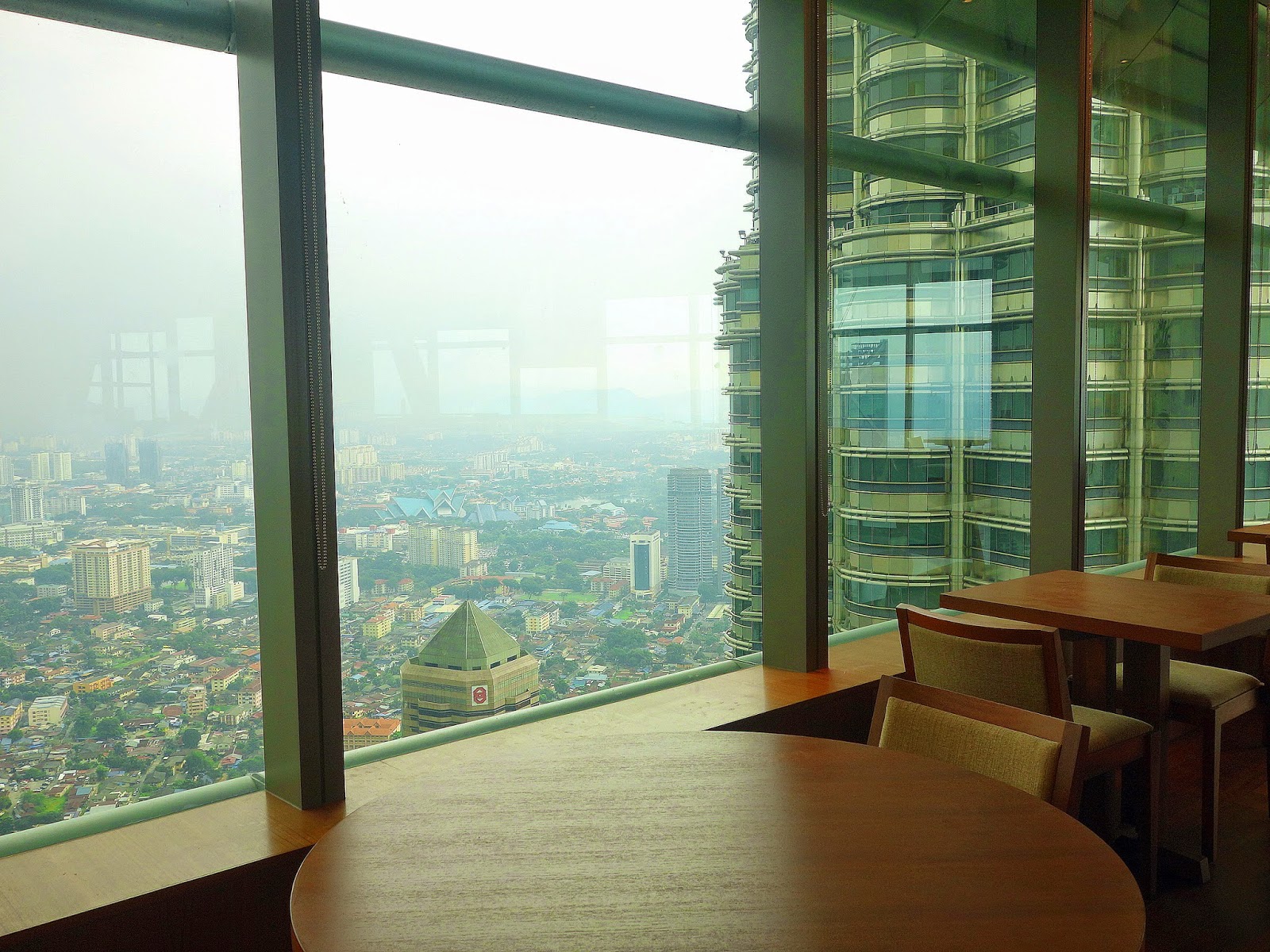 Eat Drink KL: Great. Any parting words for readers who're looking forward to the opening of Nobu KL?
Stephane: We've seen this place built up from scratch. There was nothing here, it was just raw everywhere. Now we just want to open our doors & welcome our guests. We're looking forward to meeting the people of KL's dining & bar scene.
Philip's really passionate about cooking, I'm really passionate about serving people & seeing people smile when we serve them. I just miss that part, you know, I just want to be with the customers, I just want to get this place going.
Philip: Once we open, we can see the crowd & what kind of expectations they have. Maybe there are some dishes that don't work here. We can change the dishes, we can always play around. Nobu-san has a vast variety of menus; we can't put everything into every location. For a start, it will be all his signature dishes, & later on, we will introduce more of his dishes.
Stephane: Obviously we have restaurants in many, many different locations in the world, so we always try to adjust ourselves to the dining scene of the city & the country. We're just eager to open. 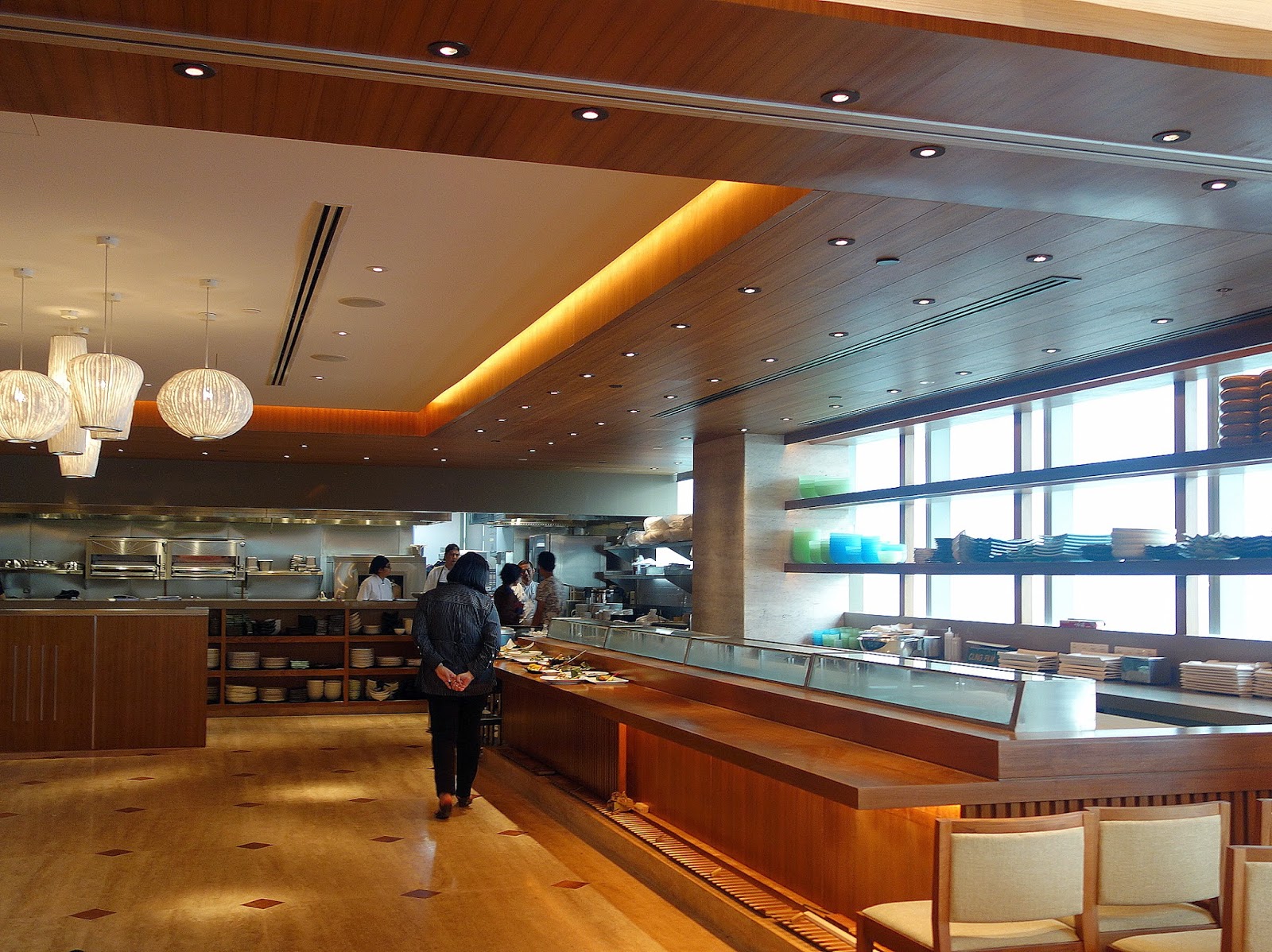 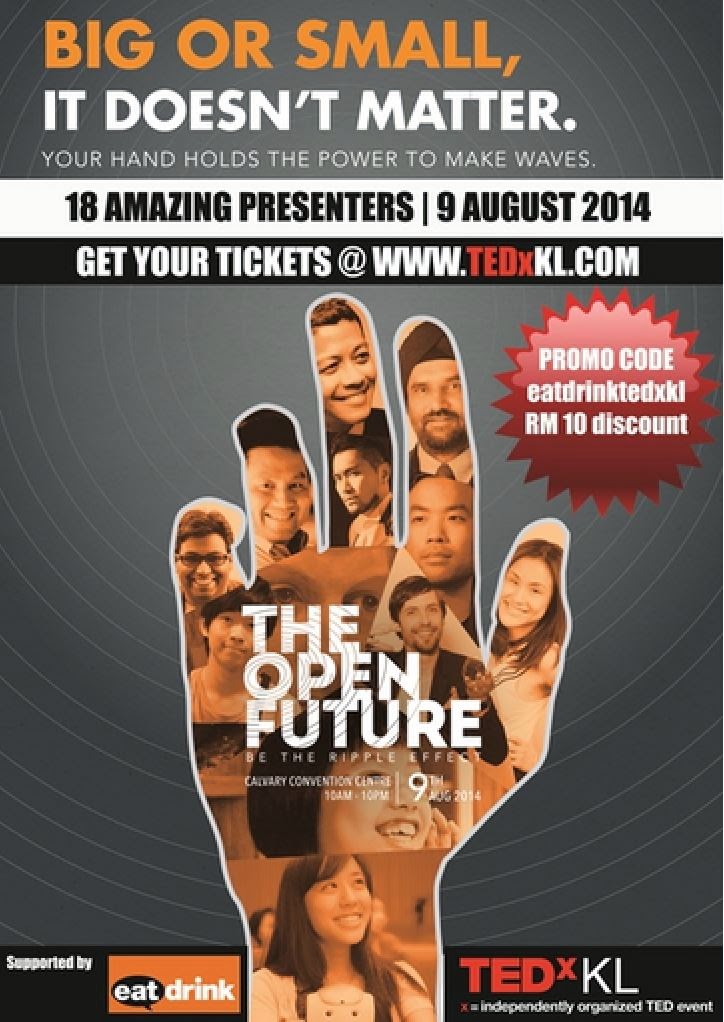