Soleil & Copper: Souvenirs of the Past 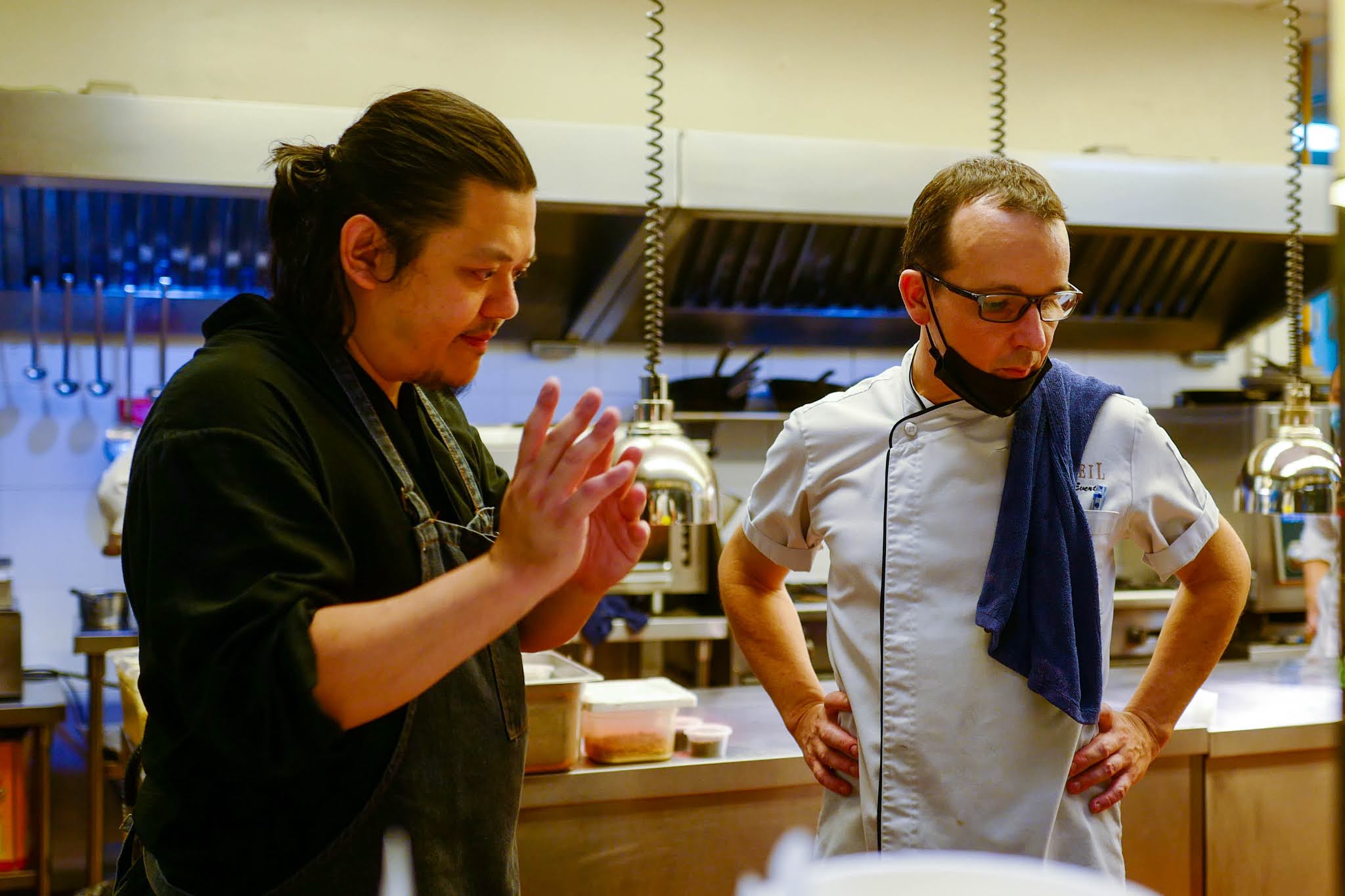 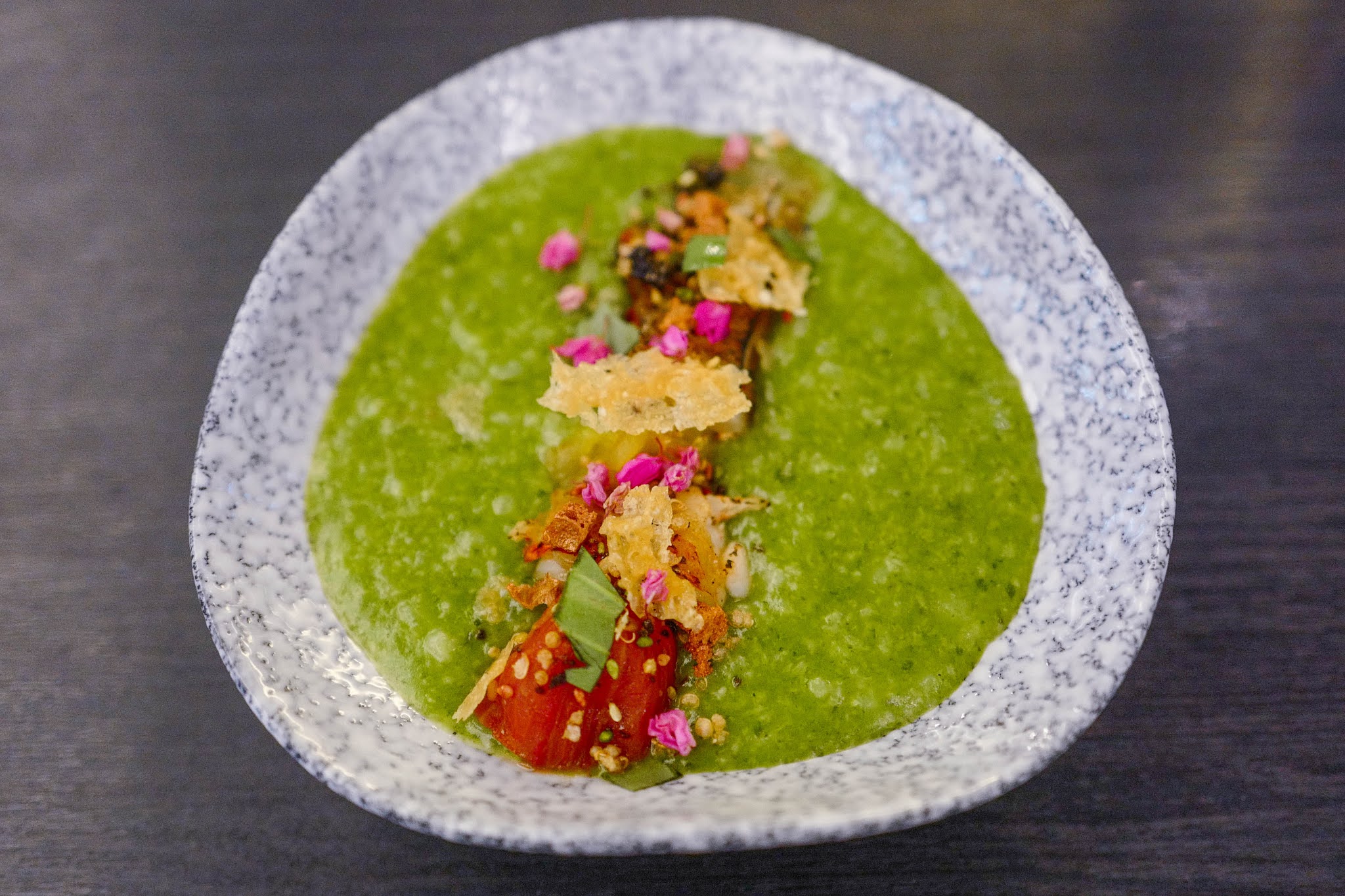 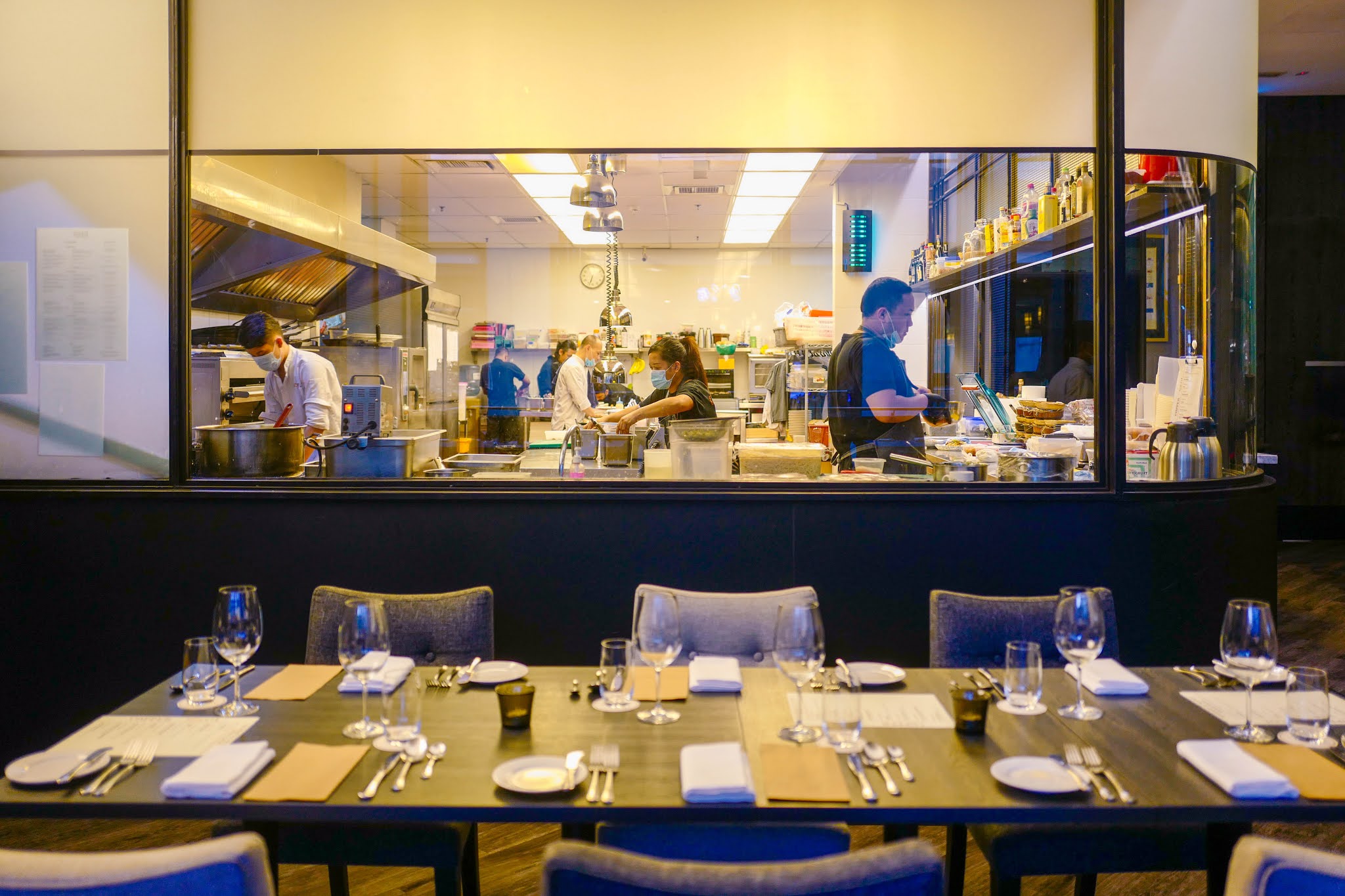 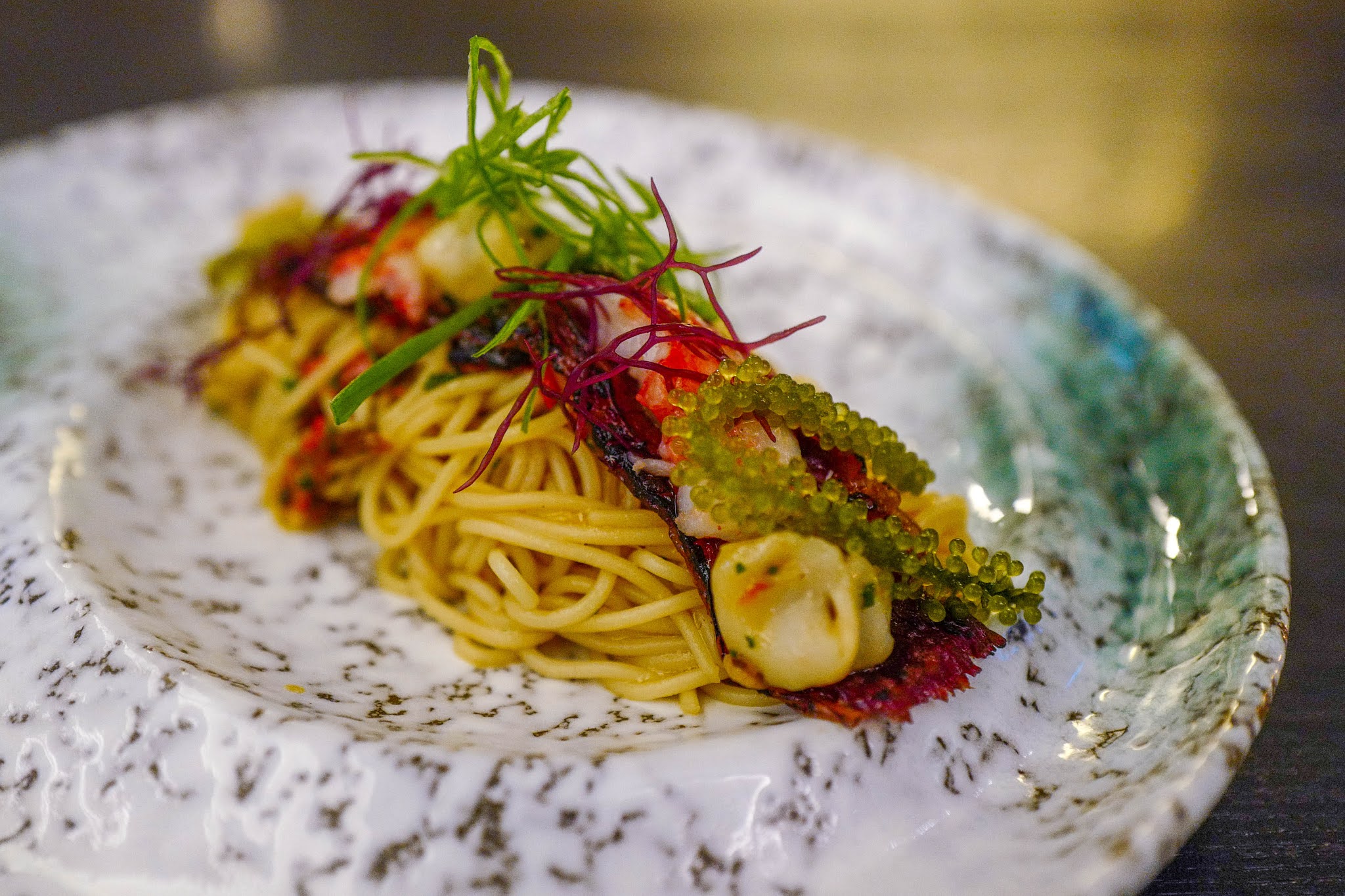 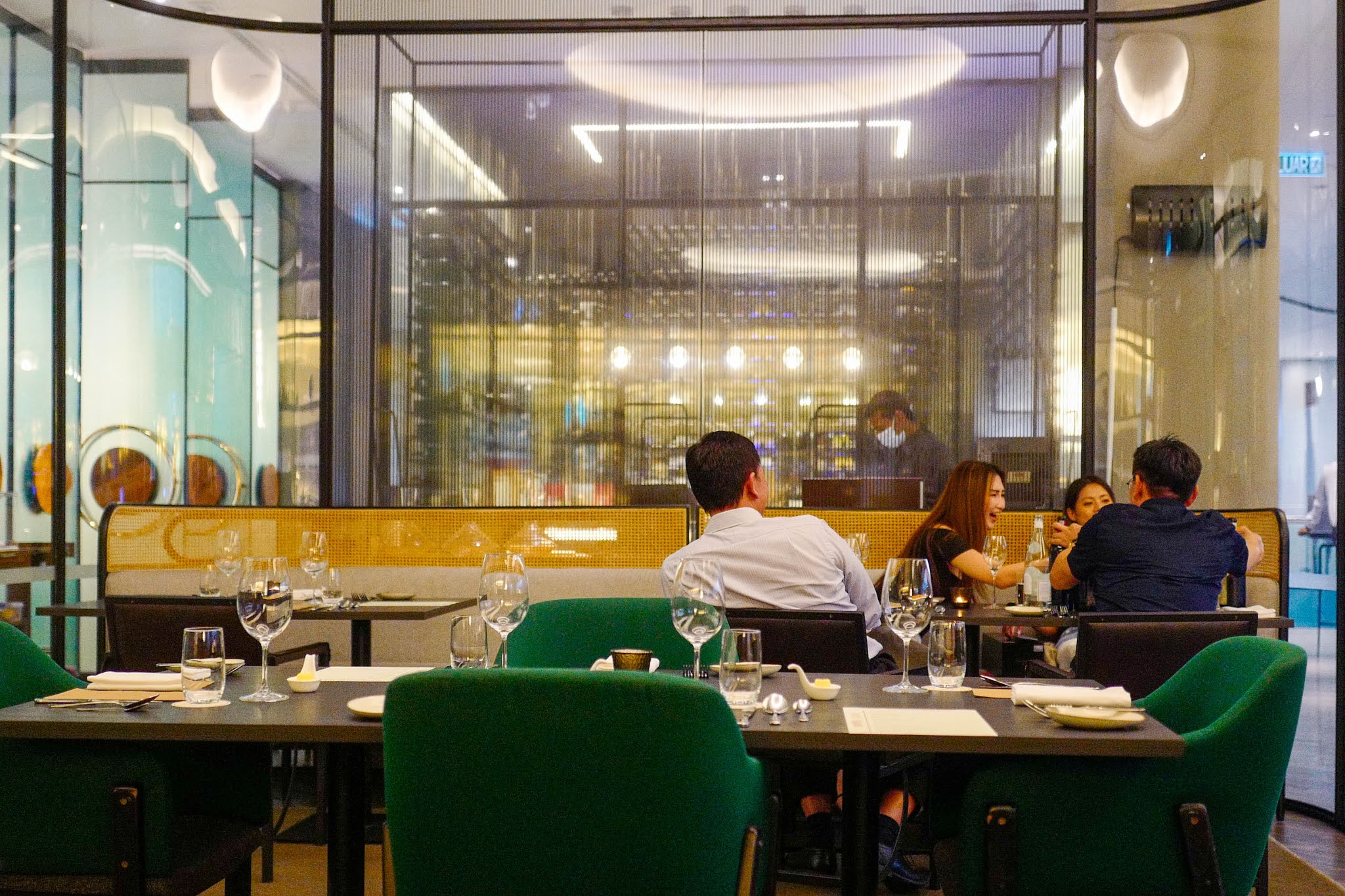 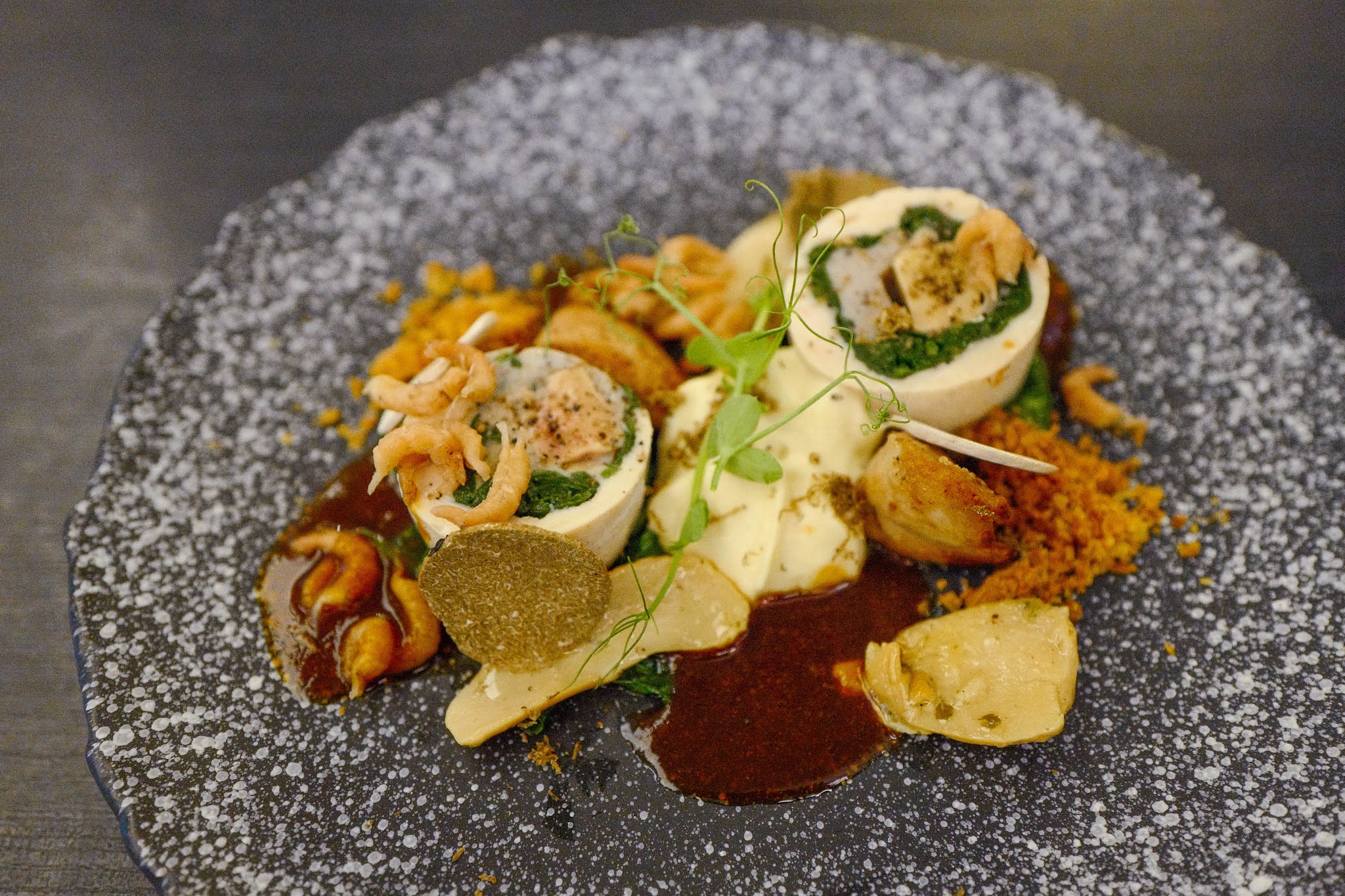 Cooking winter vegetables with mom in Ghent; growing up on noodles and porridge in Kuching: Evert Onderbeke, head chef of DC Mall's Soleil, and Chai Chun Boon, who previously led Menara Shell's Copper, spent their formative years in vastly different regions, but like many passionate chefs, they share much in common, with their long-enduring fervour for food.

The first-ever culinary collaboration between both men took place at Soleil on two recent nights, 29-30 September 2020 (in partnership with premium wholesaler Classic Fine Foods Malaysia). Souvenirs of the Past was a tribute to their mothers, fathers and grandmas, a nostalgic look back at flavours that inspired them, an impressive peek into the present and future of their hard-honed skills. 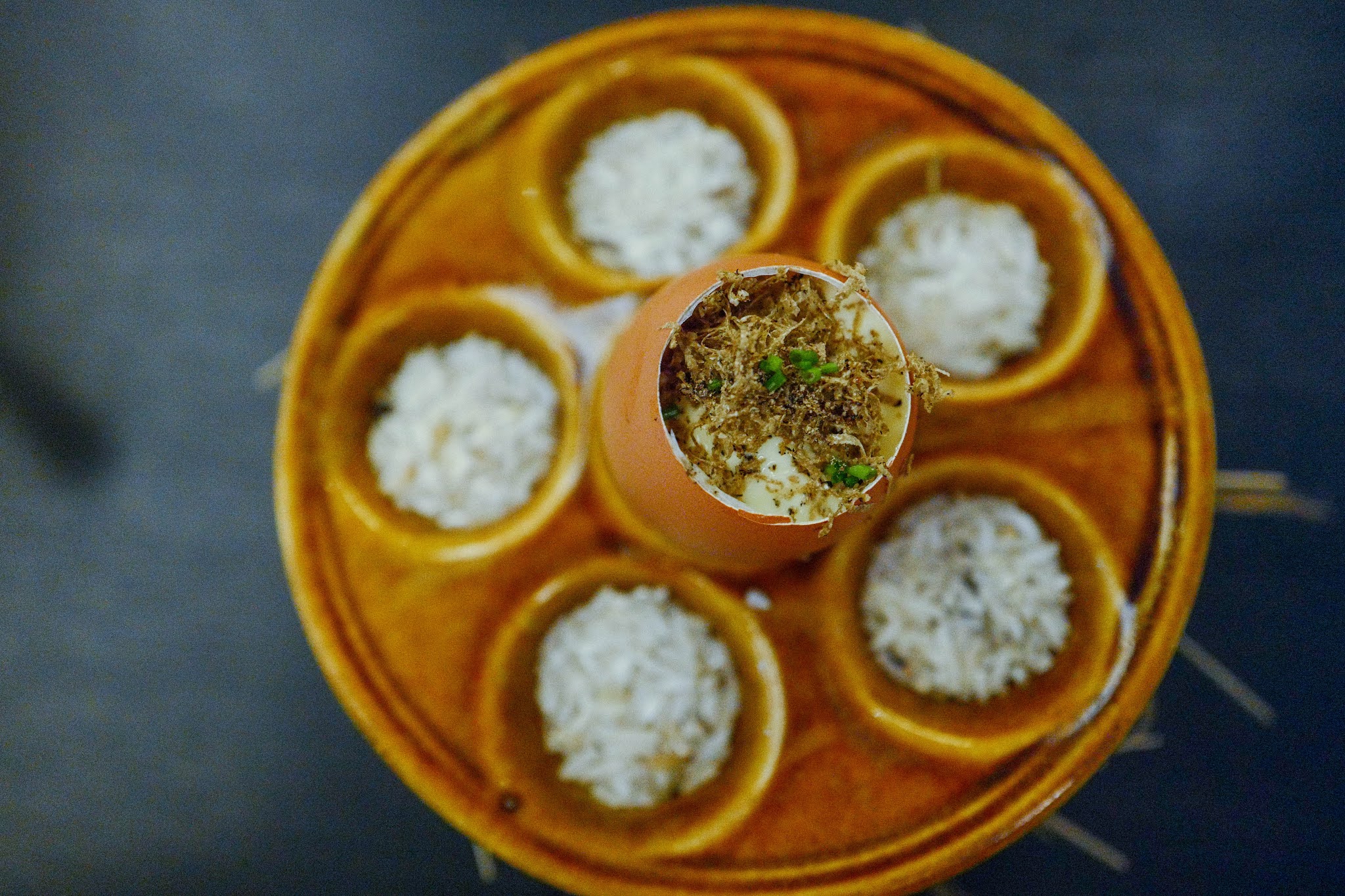 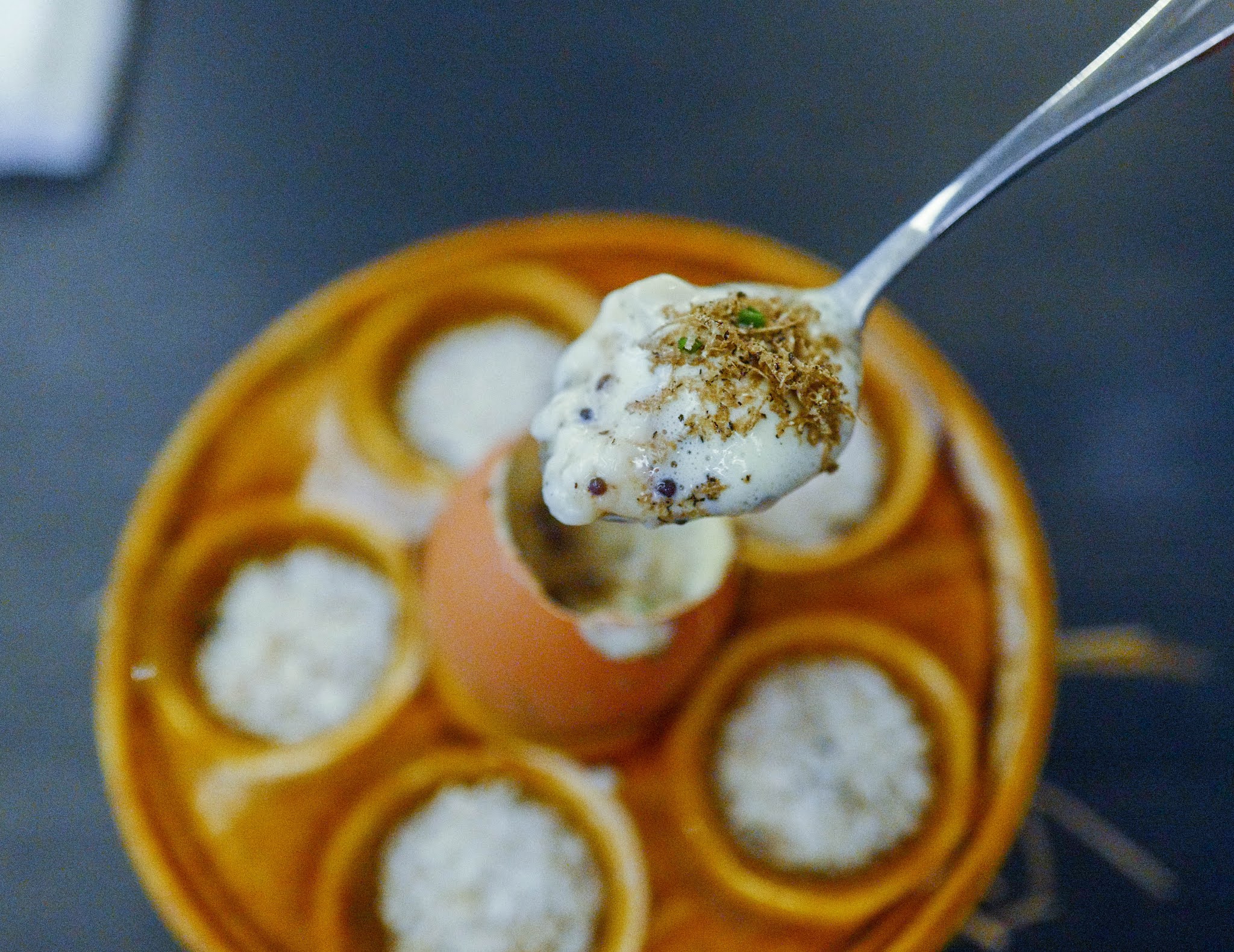 The nine-course degustation dinner brought alternating courses conceived by Evert and Chai, beginning with Chai. The evening marked the first opportunity for KL's diners to experience Chai's fare since July, when he and his wife closed Copper after more than five years.

Our meal hatched with the Humble Egg, the Sarawak-born Chai's homage to his late father who encouraged and financially supported him to explore the world. While Chai was flying to one of his first culinary jobs in Barcelona, he had a layover in Paris, where he ventured to a revered restaurant.

The first thing he tried there was a hot-and-cold egg dish, the motivation for this egg shell that bears two distinct preparations of egg - a hot, savoury custard and a cold, sweet espuma. Chai recommends digging your spoon all the way in to get both layers, yielding creaminess and vanilla-scented foaminess in one bite. The Humble Egg is a recipe that Chai can take pride in. 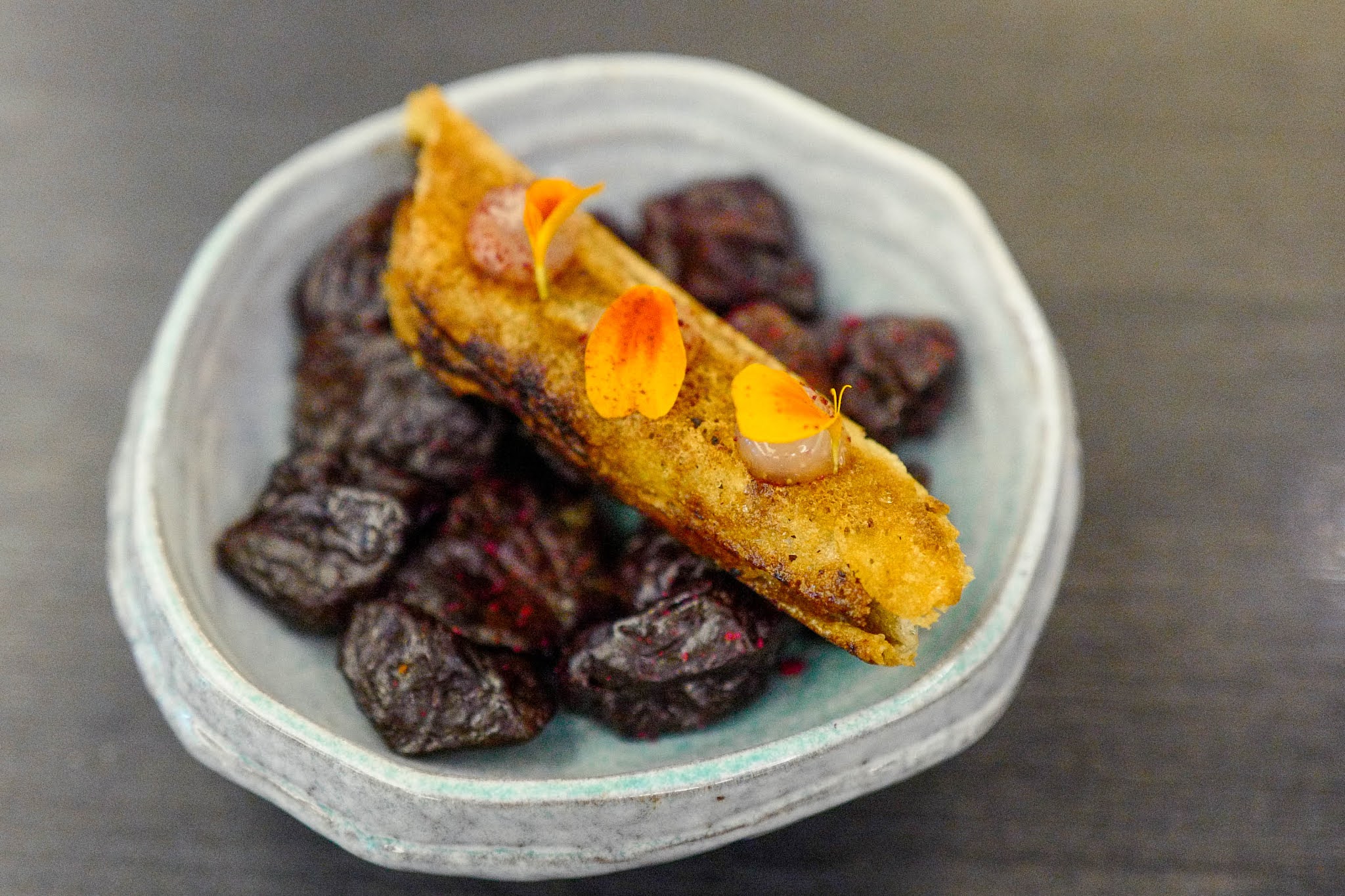 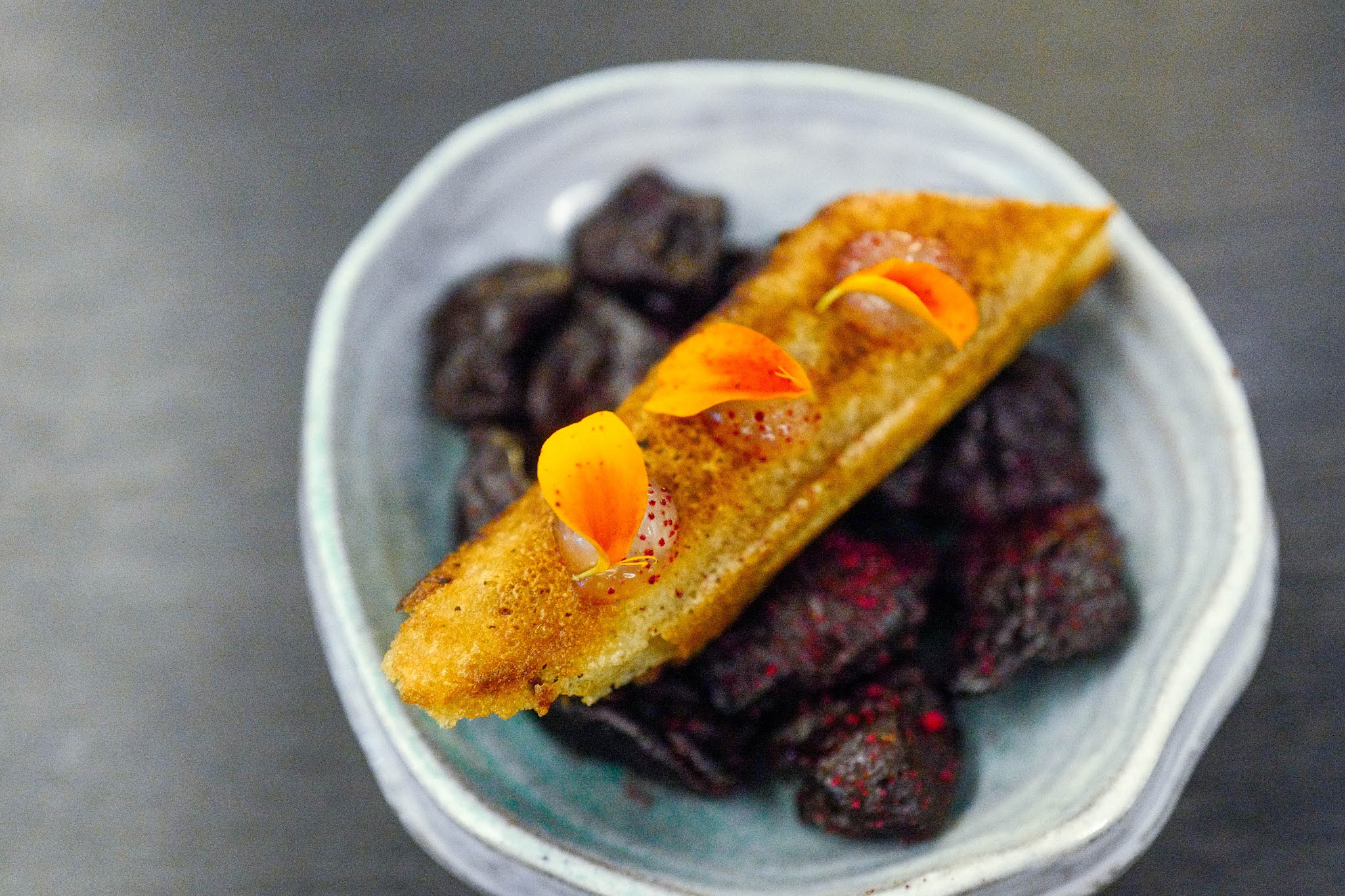 The Belgian-born chef Evert's opening salvo reinterpreted Rabbits and Prunes, his grandmother's favourite dish to make for Evert's family whenever they visited her once a month, an hour away from their home in Belgium's northern Flemish region. It's traditionally served as a stew, but Evert's contemporary spin transforms it into crisp feuille de brick pastry stuffed with rabbit meat and prunes, dotted with lemon gel and edible flower petals. It's a lovely, nourishing homage to rustic cuisine, with the prune's potent sweetness lingering in wake of the fleshy rabbit. 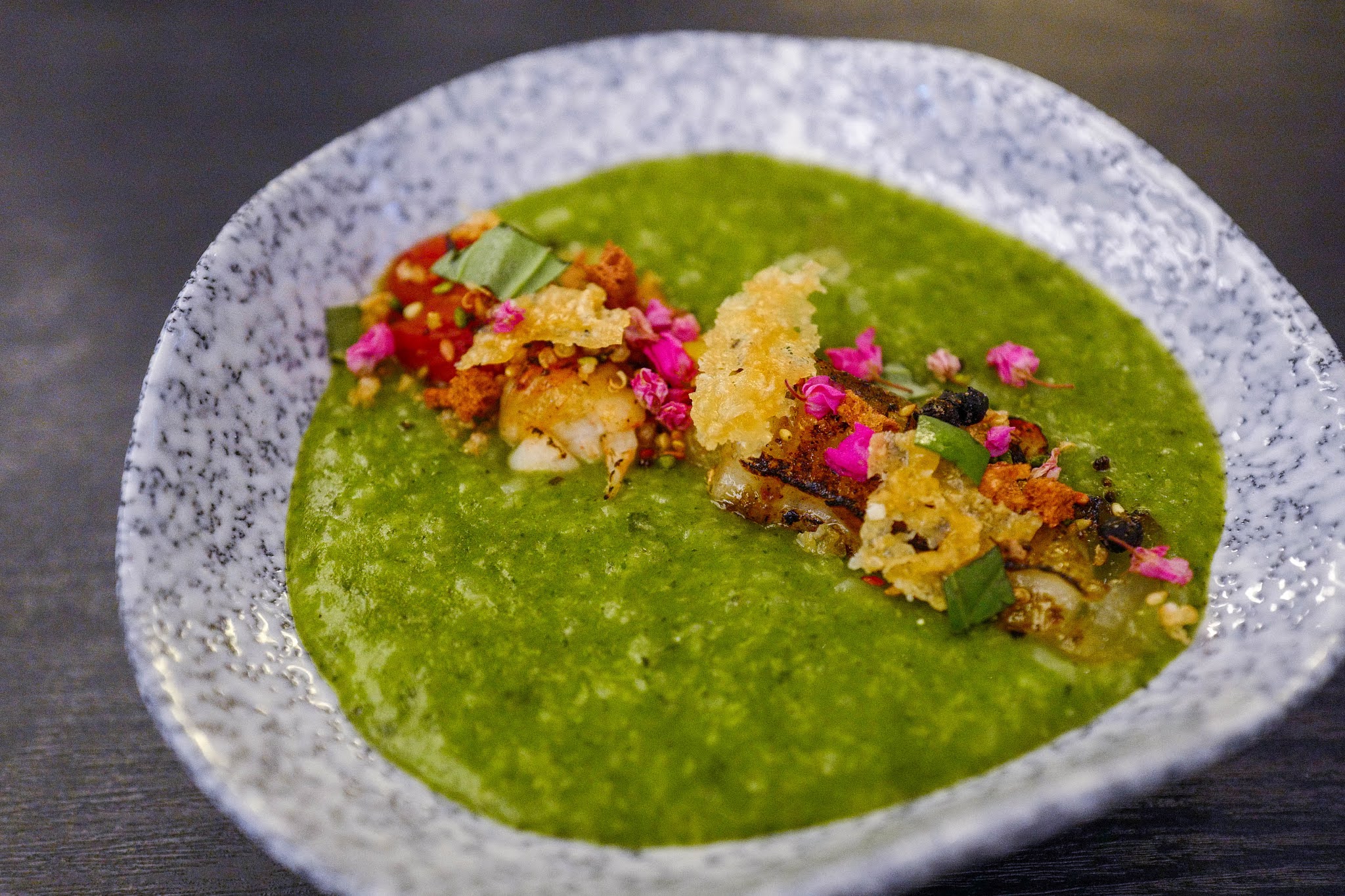 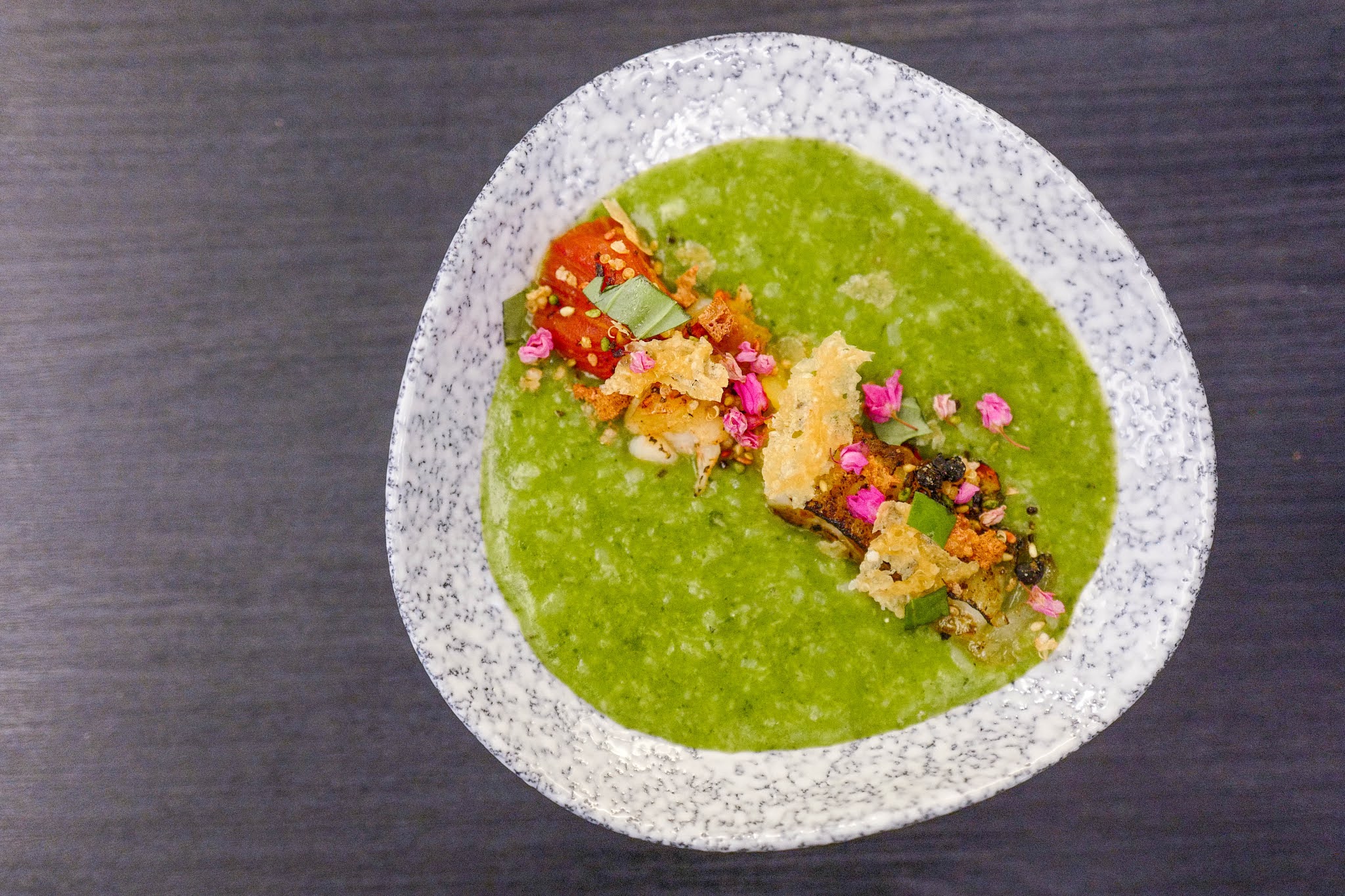 Chef Chai confesses he was a picky eater as a child, with porridge as his preferred sustenance. Here, he blends his Asian boyhood with his European professional experience to present Italian basil-fuelled pesto with cheese in the form of a porridge. Lobster, flounder fin and a seaweed glaze infuse the ocean's brininess into a herbaceous concoction, studded with sesame and croutons for crunch. It's a tweaked version of the basil pesto porridge he served during Copper's final days, and it resonated with Soleil's patrons too for its soulful, nicely nuanced comfort. 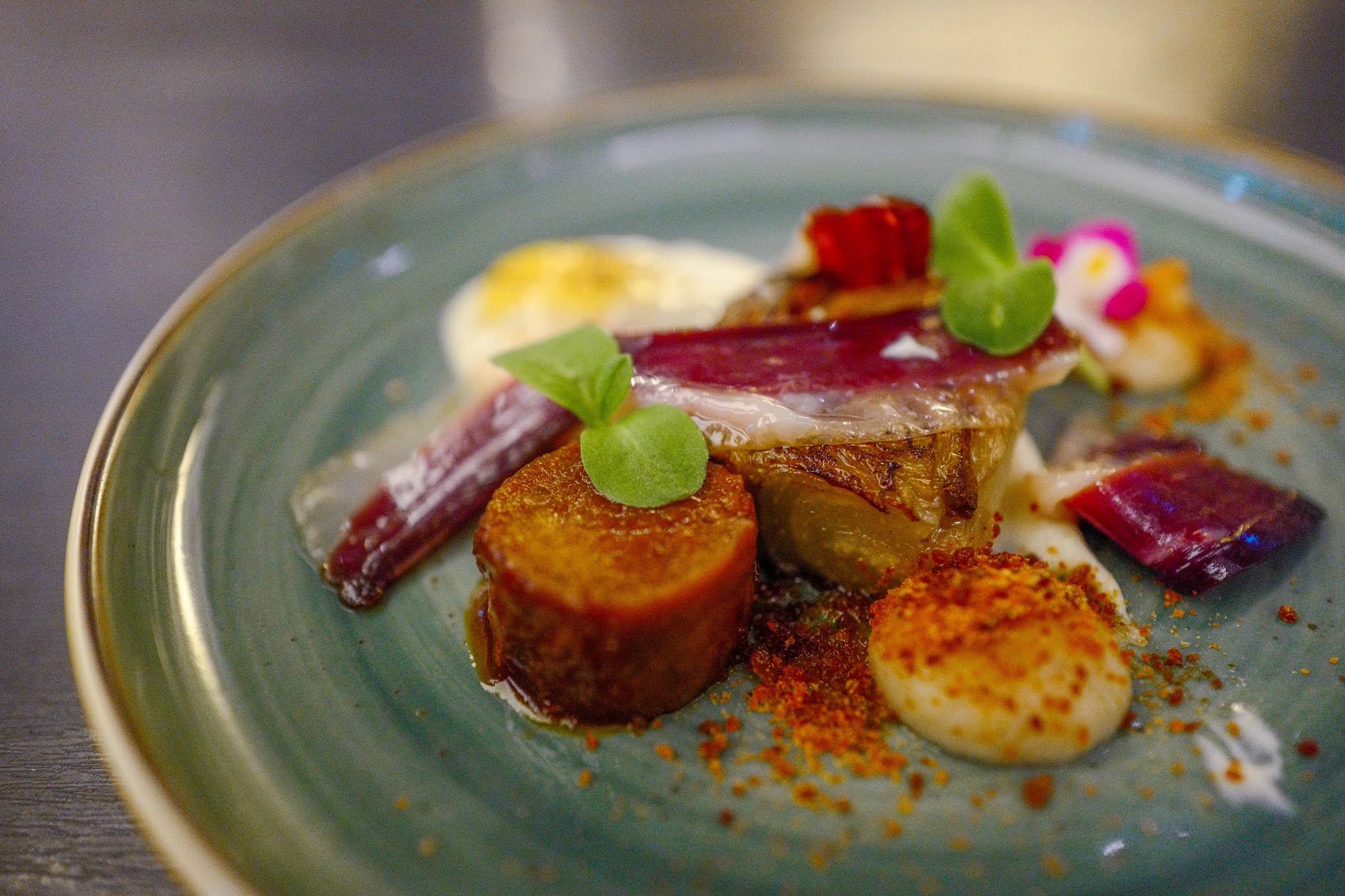 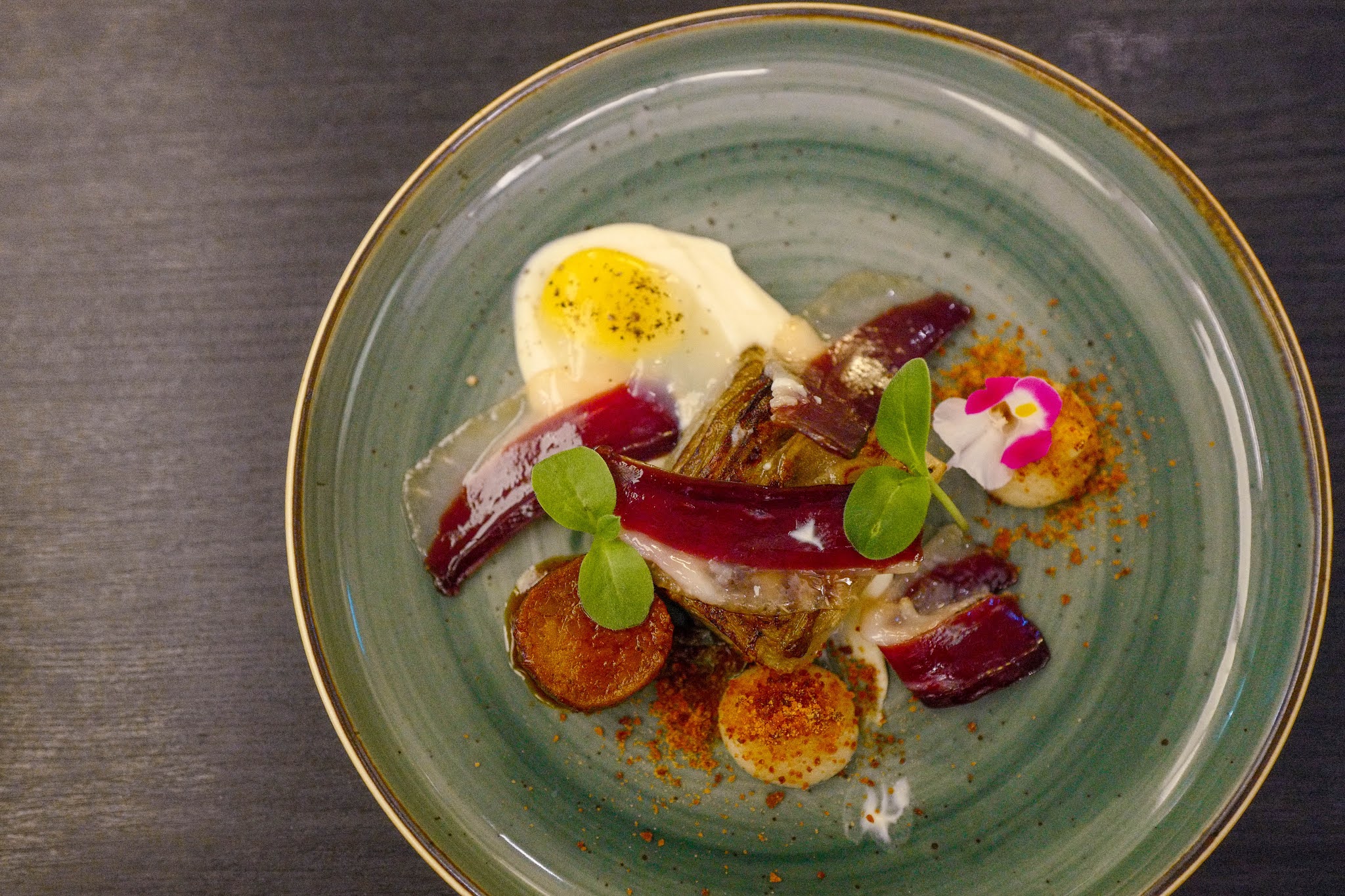 In the culinary equivalent of a top-tier squash championship, chef Evert rallied with his next offering, Belgian Endives and Ham, a personal staple of his younger years that he helped his mother cook each winter (endives used to be only available during colder seasons). Evert's pork-free rendition replaces conventional ham with Spanish cured duck ham (kept at room temperature to preserve its fattiness) and pork sausage with a vegan sausage, paired with braised endives and a light, bright cheese sauce. Rounded out with a puree of Jerusalem artichoke, a crumble of chorizo, and a slow-cooked quail egg, this is rich and robust, an elaborate ensemble that shows how a matured chef makes magic and works wonders with many ingredients on a single plate. 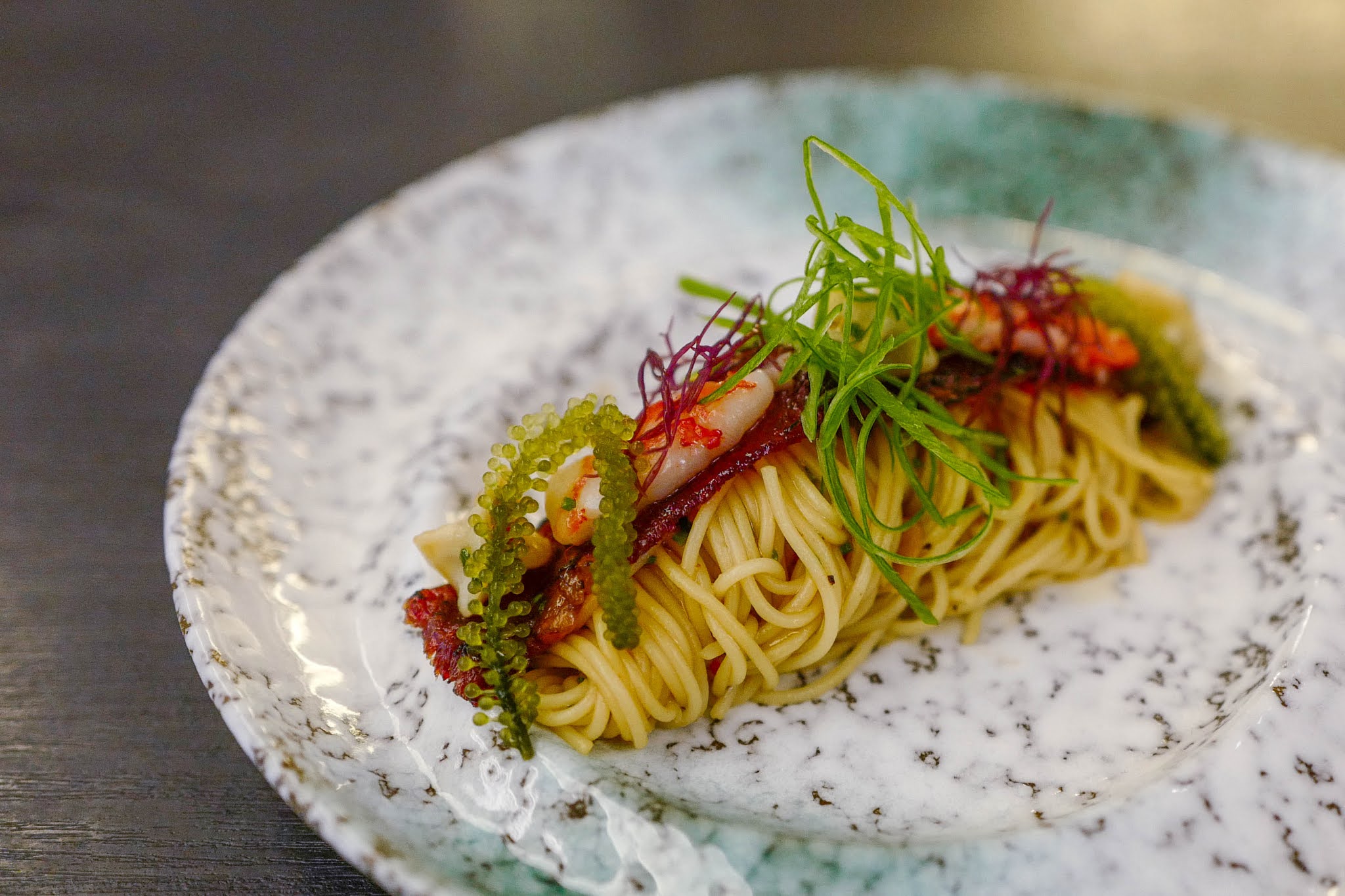 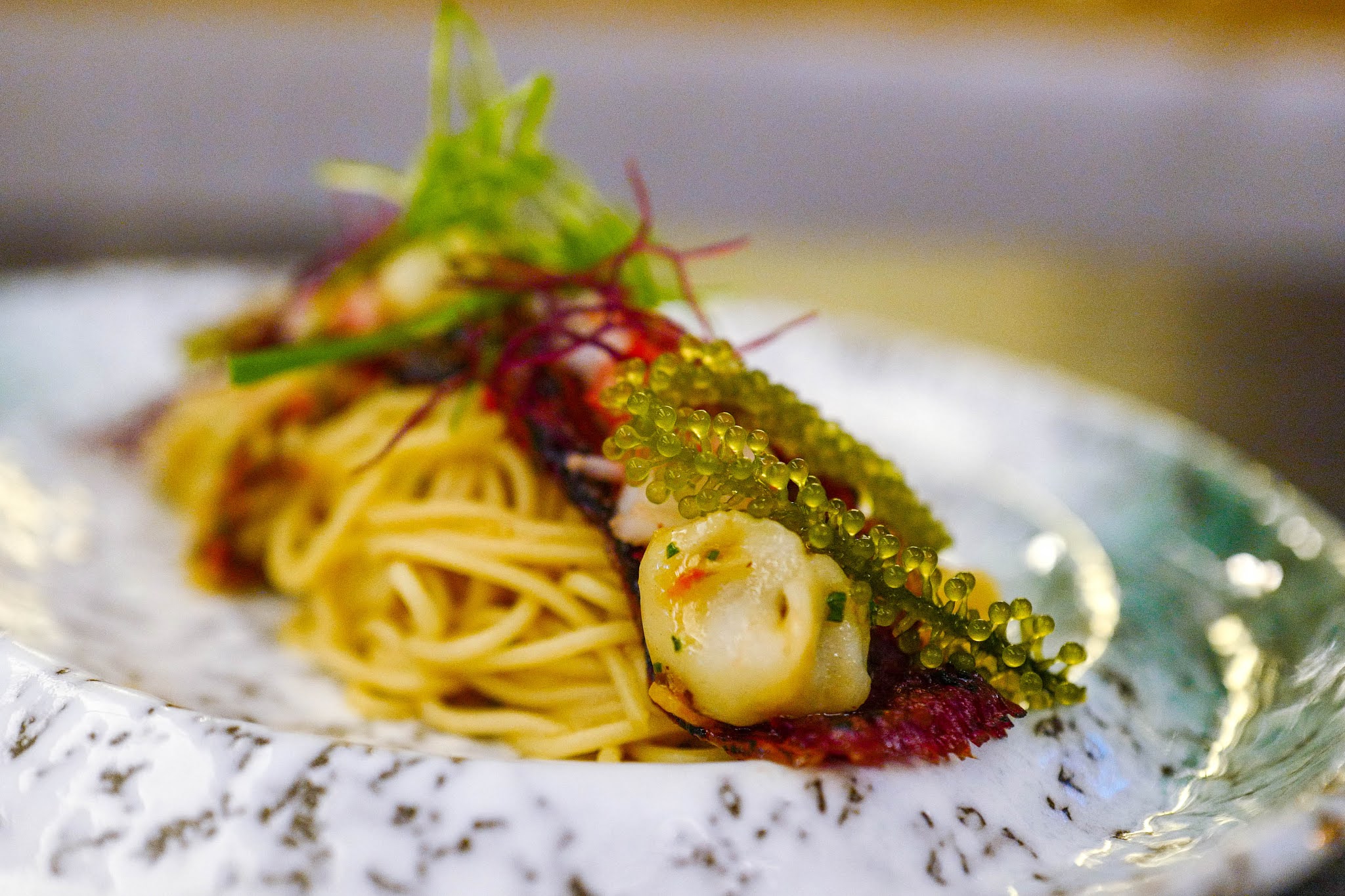 Next up, noodles: Chef Chai harks back to the hometown shop that served his beloved mee kolok with these slick, smooth strands that cushion wagyu karubi 'char siew' and kombu - a luxe remake of a Kuching kopitiam treat, with every component being a playful riff off the ingredients of mee kolok. Ultimately, this is every ounce Chai's own original creation, from the layering of mini beef dumplings to the Carabinero prawns, the allium garnishing to the sprinkle of sea grapes. It's a testament to Chai's talent and imagination that his memories of mee kolok would spark something like this. 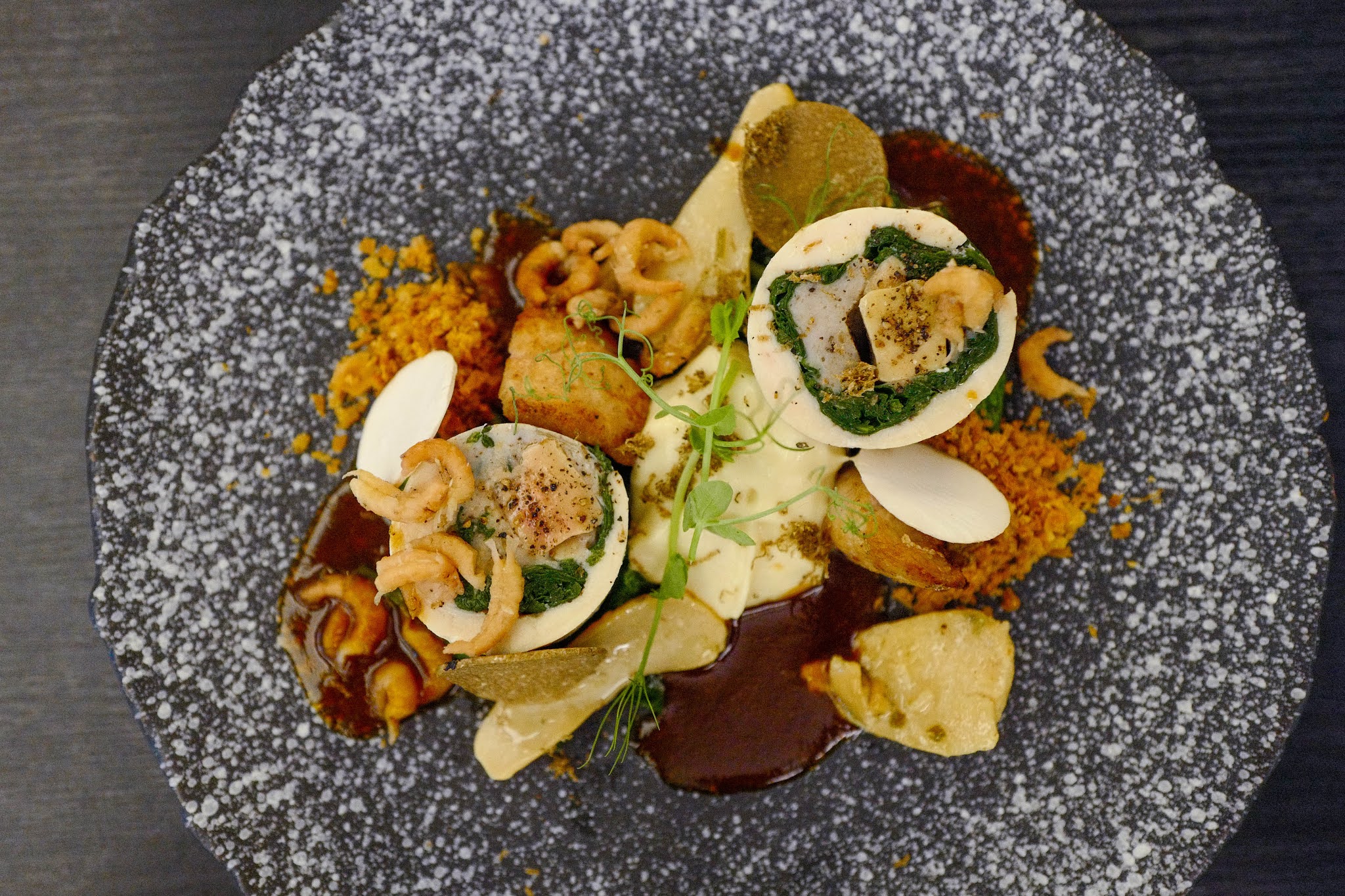 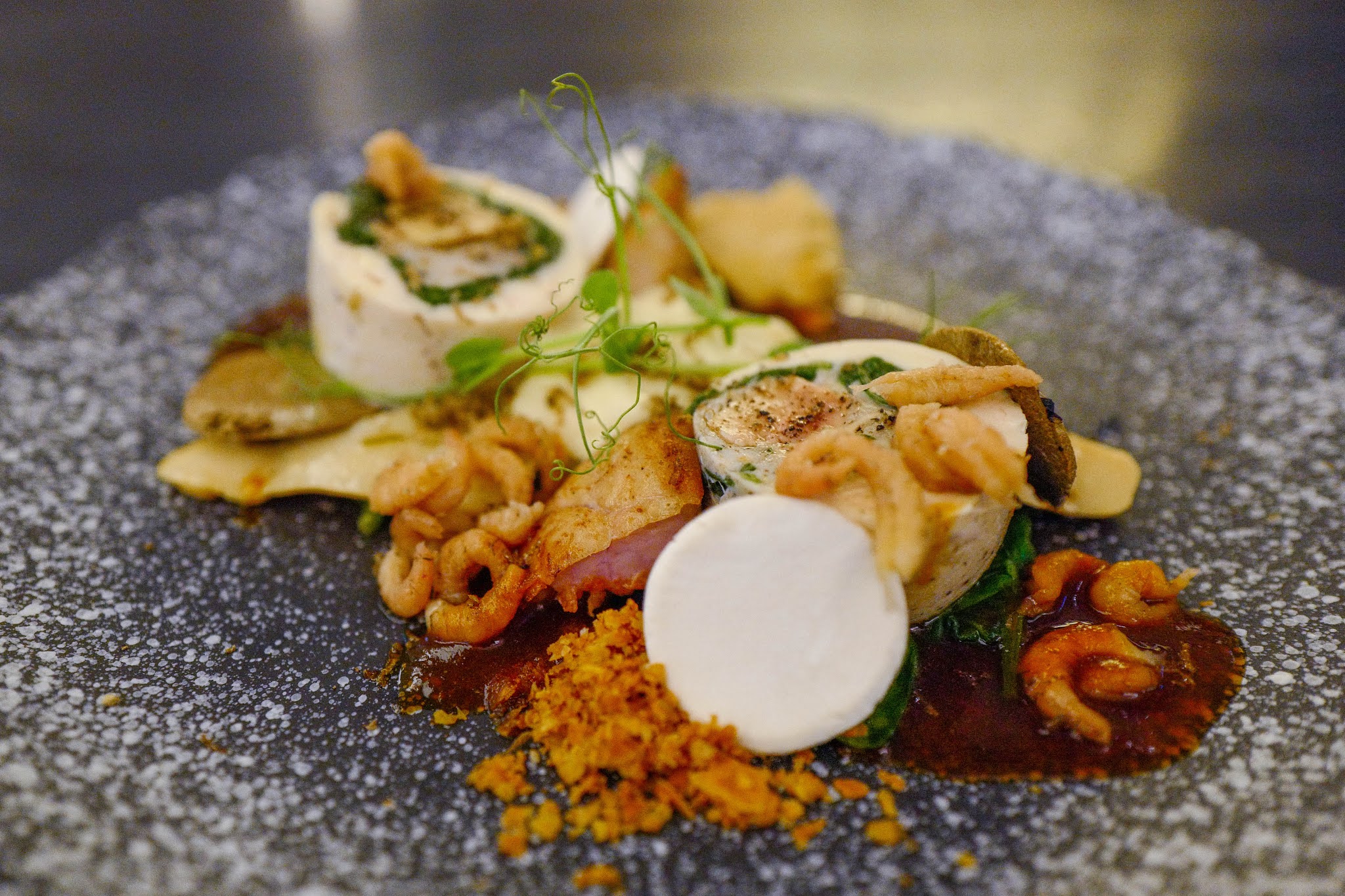 Voulez-vous Vol-Au-Vent? Oui! As a youth, chef Evert used to frequent a bistro that baked tall, cylindrical puff pastries; as an adult, he deconstructs and turns them into a complex roll of chicken breast with foie gras and chicken mousse within, sprinkled with chicken skin across pastry pieces and a jus of chicken bones for plenty of poultry pleasure. True to Evert's confidence, there's still more in this interplay of dynamics between land and sea - veal sweetbread and truffles, plus Hollandic brown shrimp and mashed potatoes boiled with scampi-infused milk. This intimate dinner might be dubbed Souvenirs of the Past, but this intricate dish deserves to be memorabilia for the future. 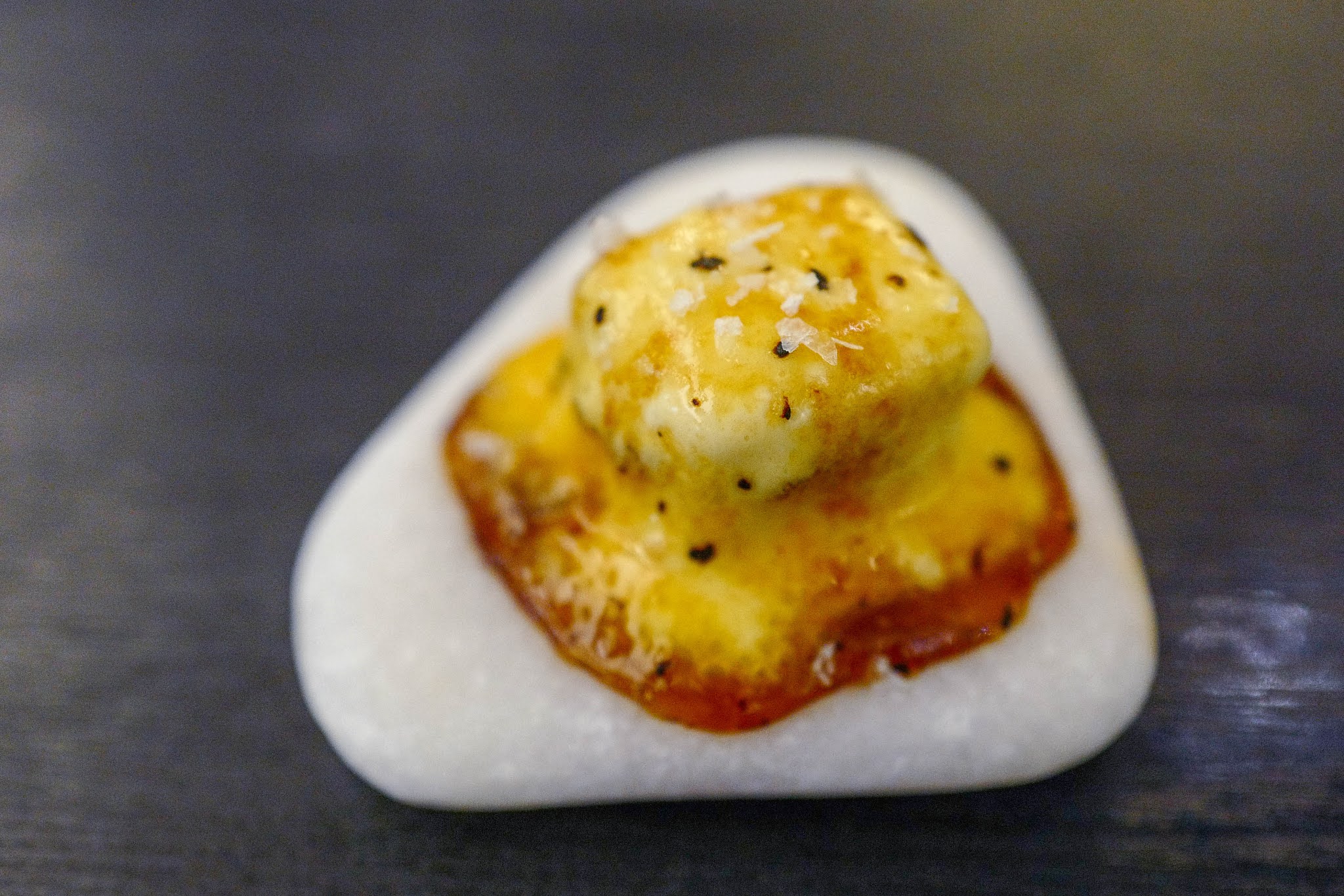 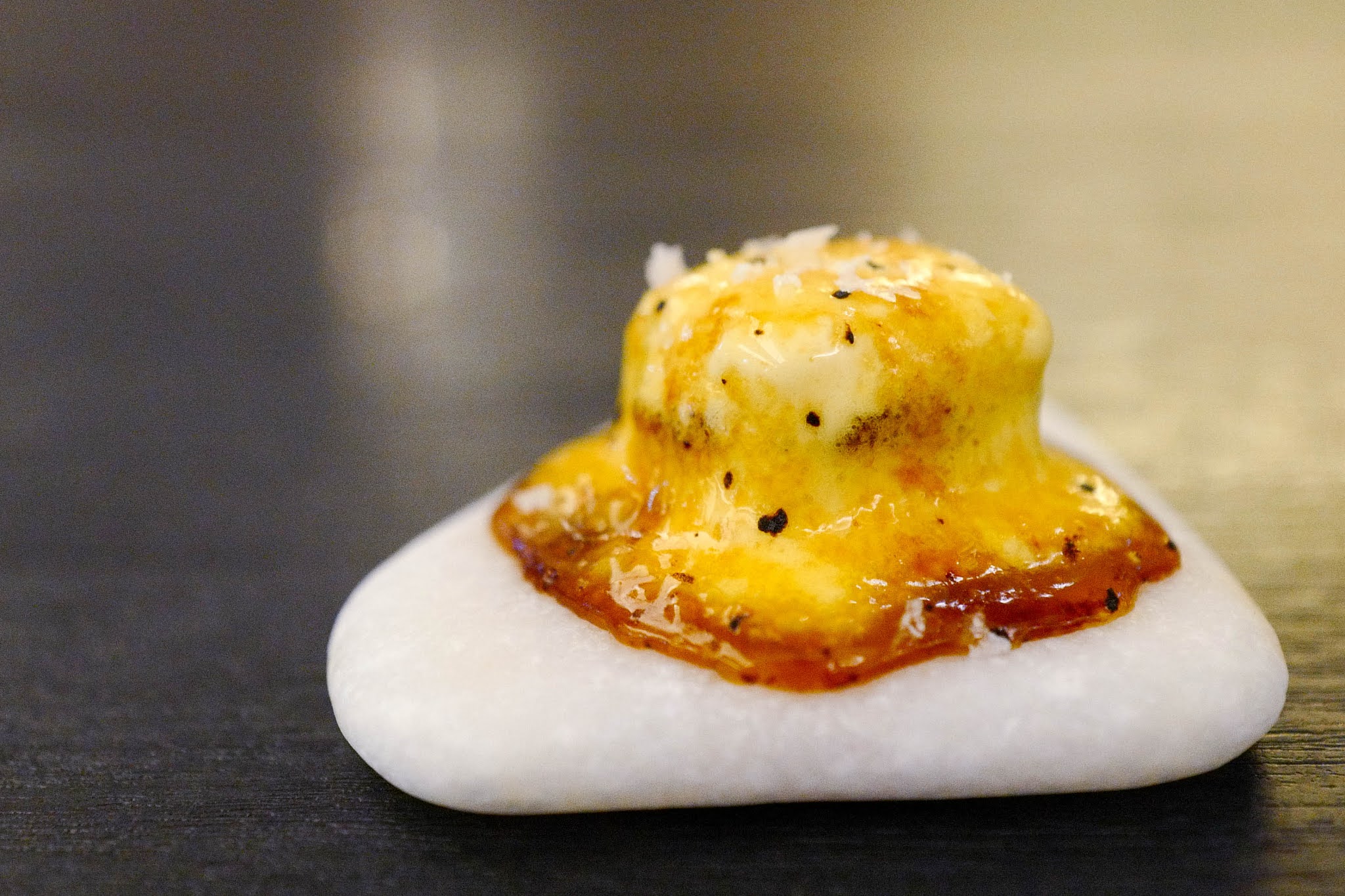 Dessert brings it back home, with Chai’s remembrance of his mother’s pineapple tart, which she prepared often for two decades. She employed a secret weapon - Parmesan - for a slight crust to her tart; her son takes the concept all the way with a 'Marshmallow' of 24-month-aged Parmesan wrapped around pineapple paste, torched for a toasty, cheesy 'crust.' A pineapple 'tart' that looks like a marshmallow but tastes tangy and tropical, bolstered by a savoury sharpness? Take us there! 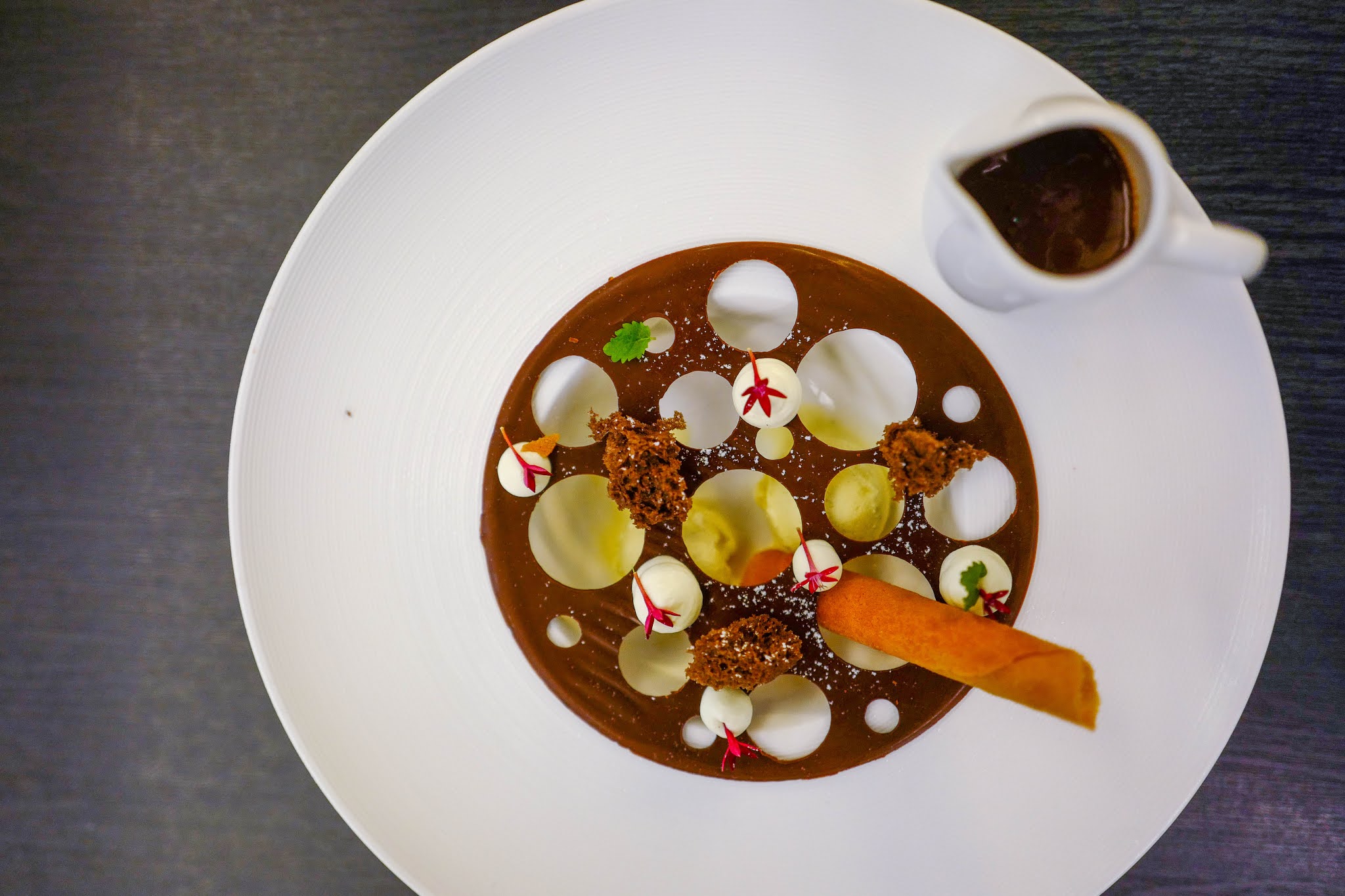 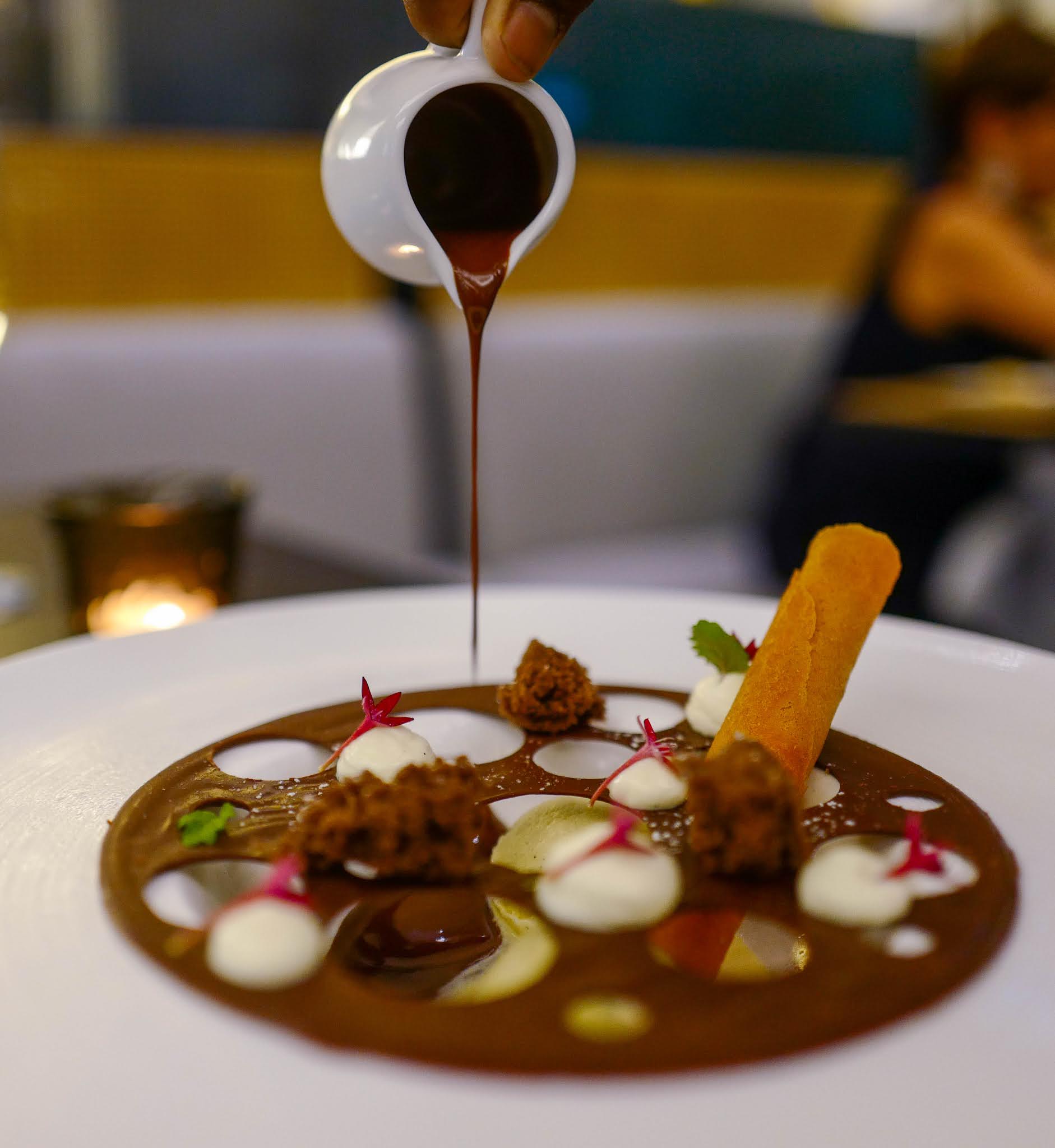 Chef Evert, meanwhile, goes evergreen with the Dame Blanche, revamping the quintessential Belgian dessert of vanilla ice cream with dark chocolate (his parents' customary sweet indulgence) into a noble plated beauty of scoops of vanilla ice cream topped with with a disc of solid dark chocolate, holed up like Swiss cheese, whimsical like a Willy Wonka brainchild, topped with whipped cream and chocolate sponge, poured over with dark chocolate sauce. There's nothing like a Dame, indeed - the perfect dessert for the perennially young at heart. 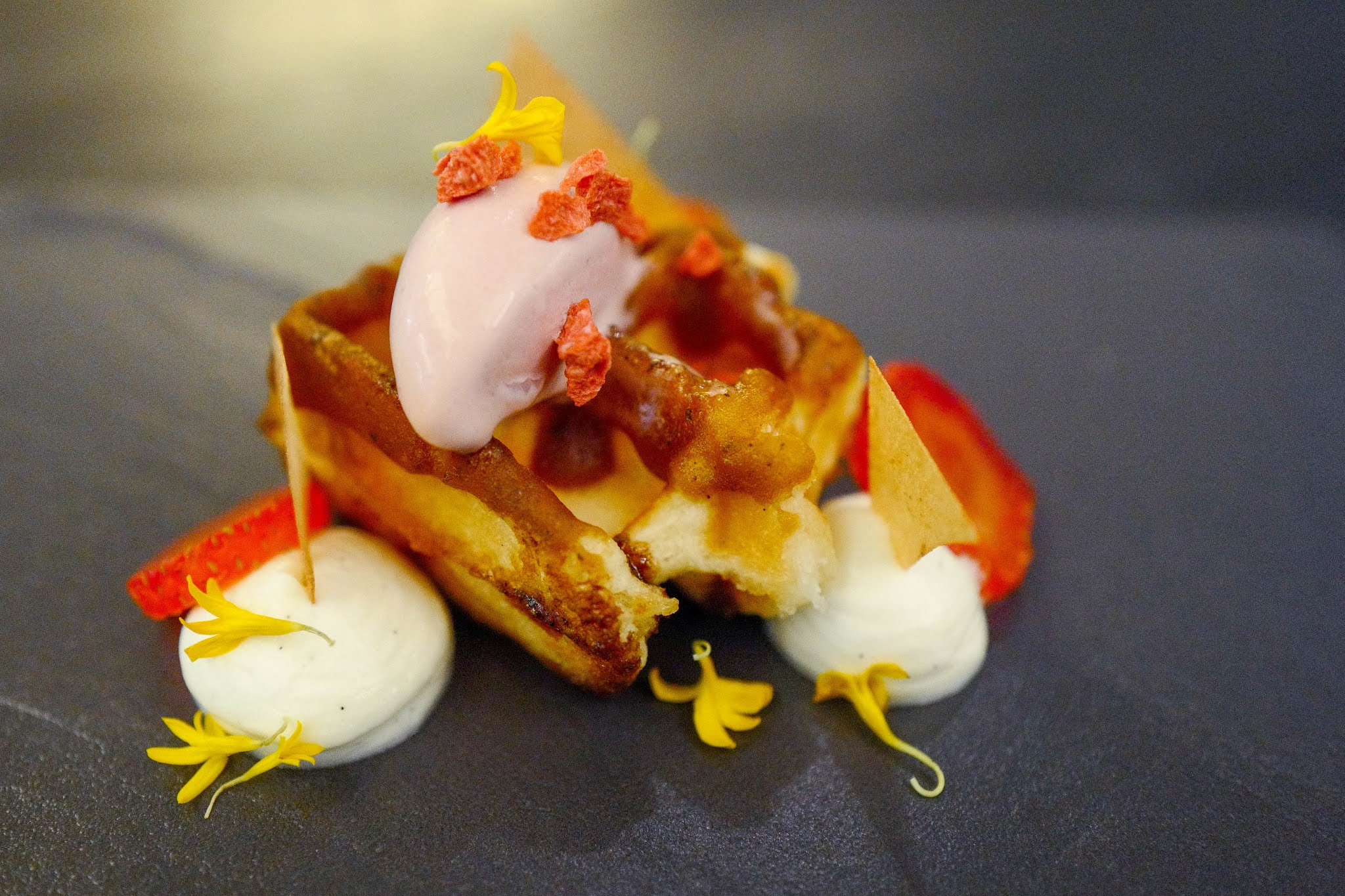 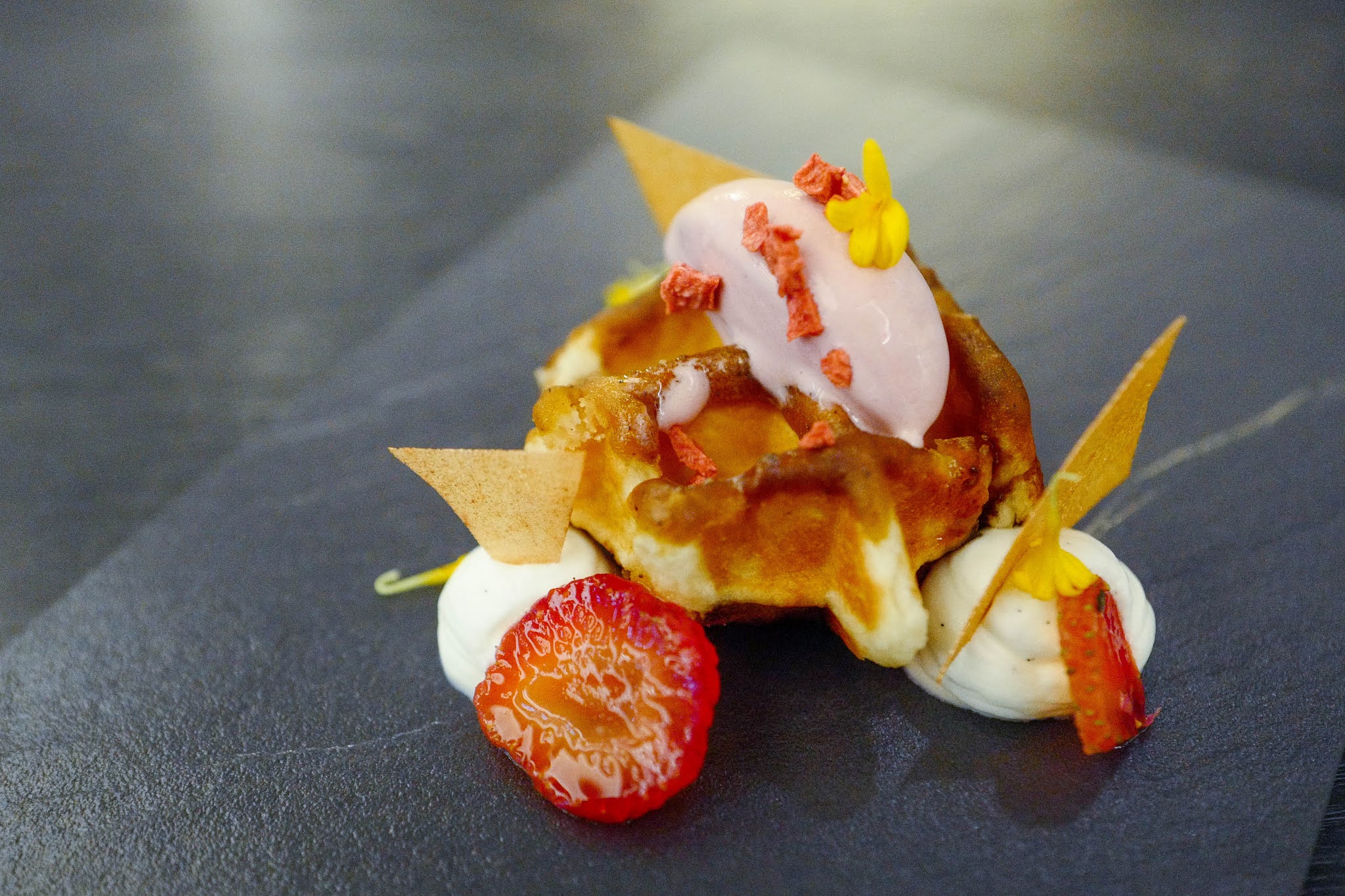 We wouldn't want this meal to end - the encore is crafted by both Evert and Chai, bringing together Belgium with Malaysia for a soothing, satisfying conclusion. Belgian waffles with a hardy crunch, caramelised with Belgian pearl sugar, crowned with dense, yeasted yogurt, come with Sarawakian black pepper-infused gula apong candy, Cameron Highlands strawberries and ginger flower syrup. A cross-continental effort that does thoughtful justice to the history and heritage of both men, making this dinner a genuinely personal, one-of-a-kind evening to reminisce over. 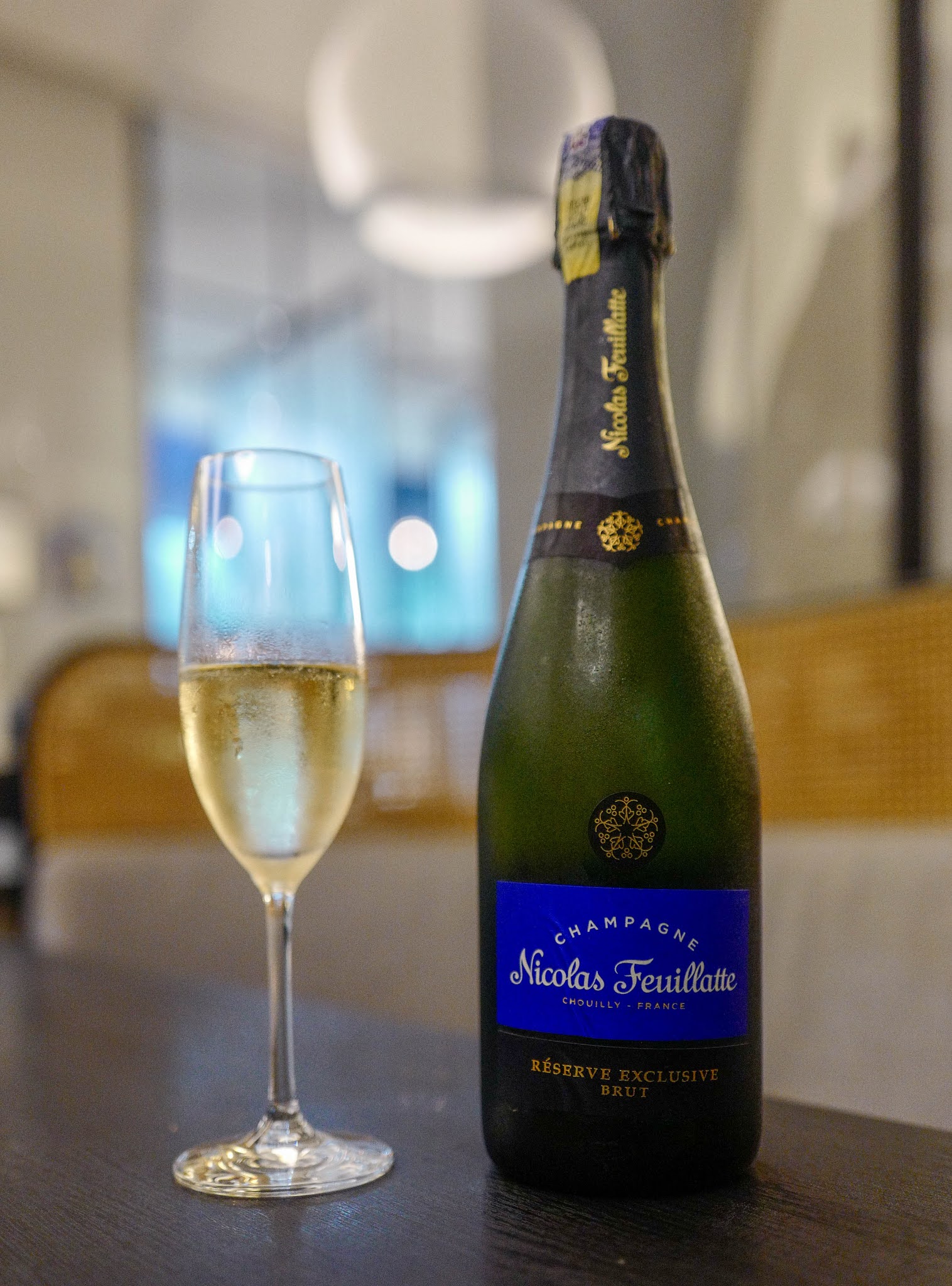 We'd enthusiastically raise a vibrant glass to both Evert and Chai. Many thanks to Soleil for having us here. 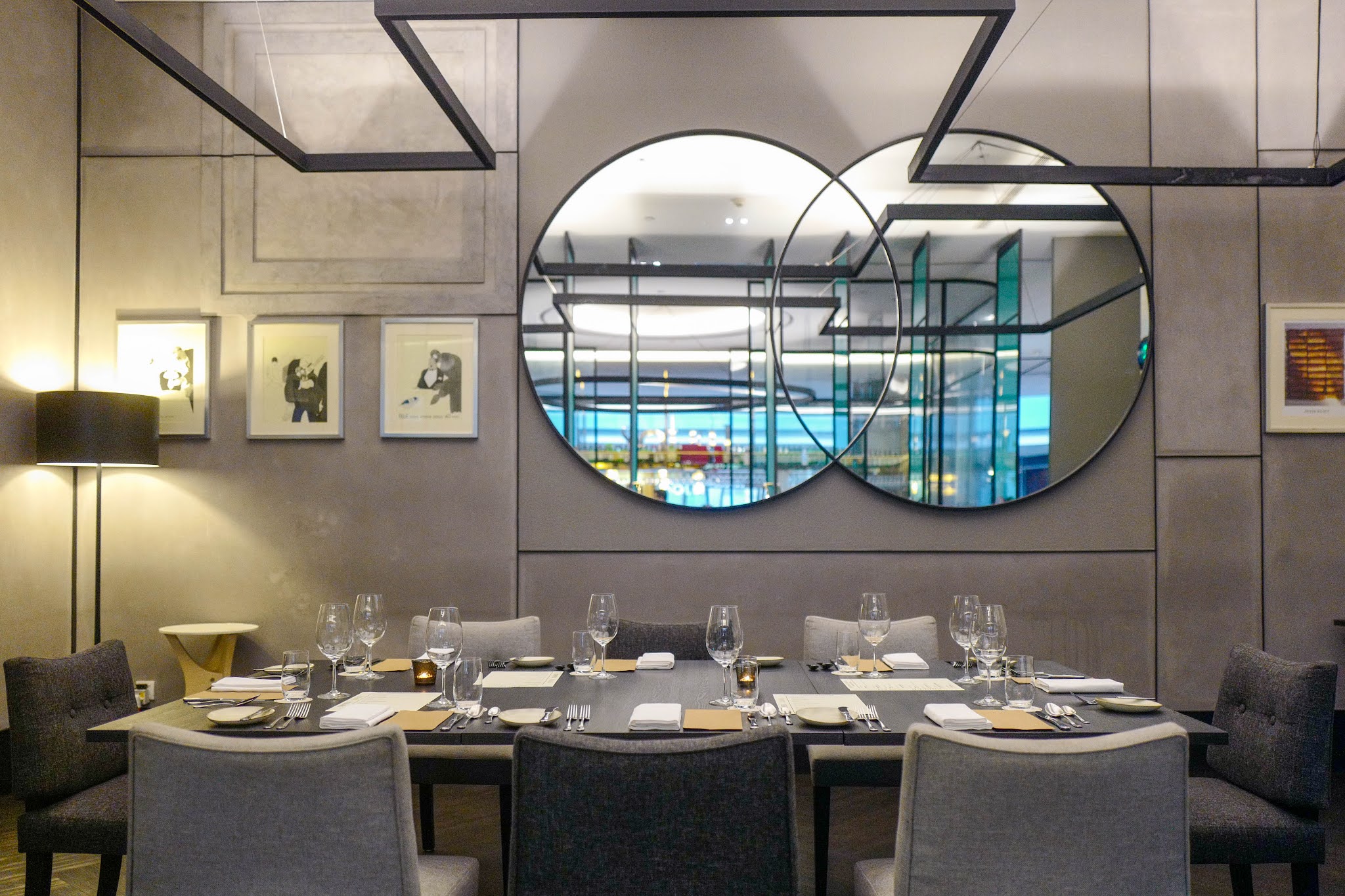 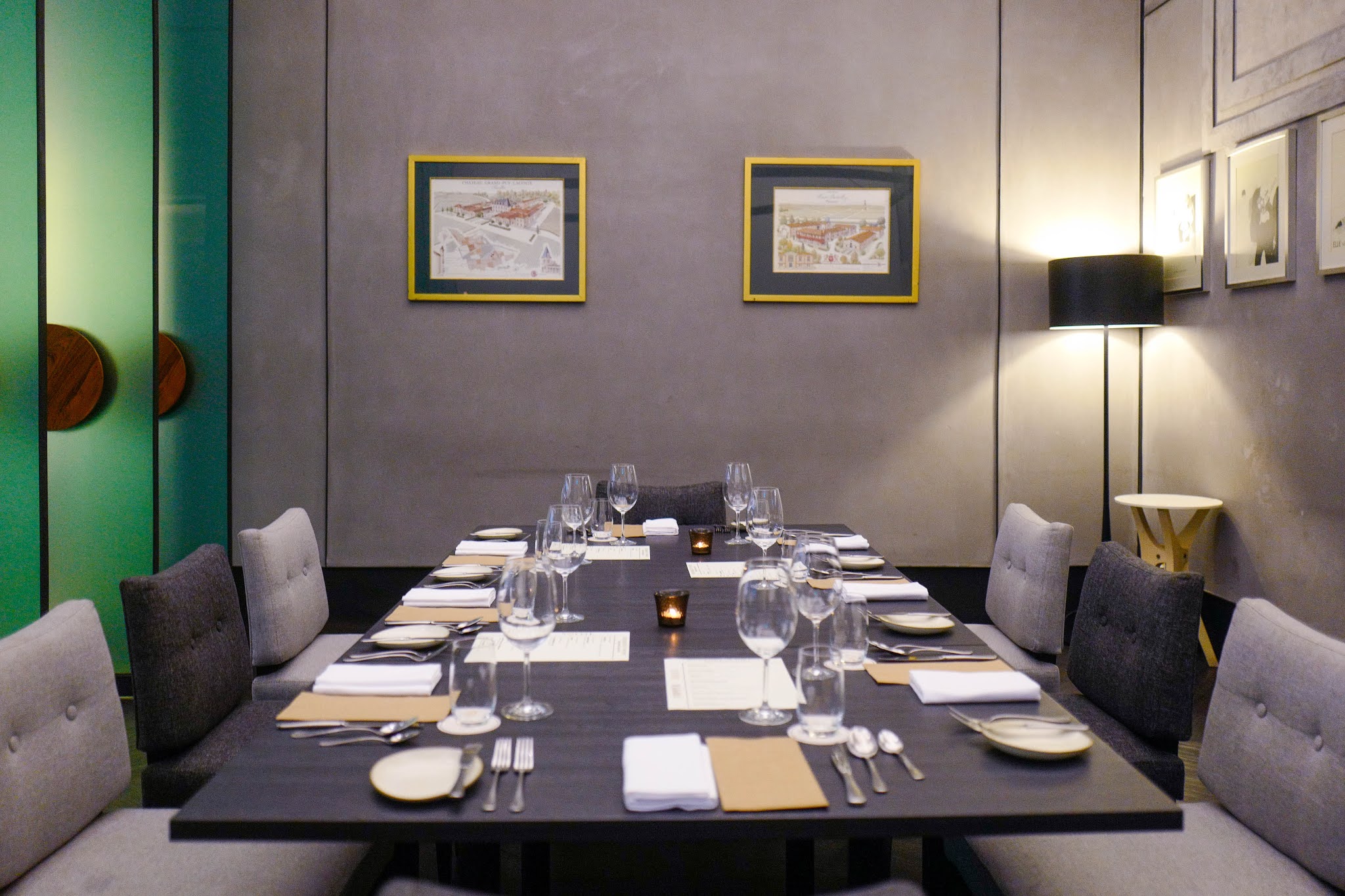 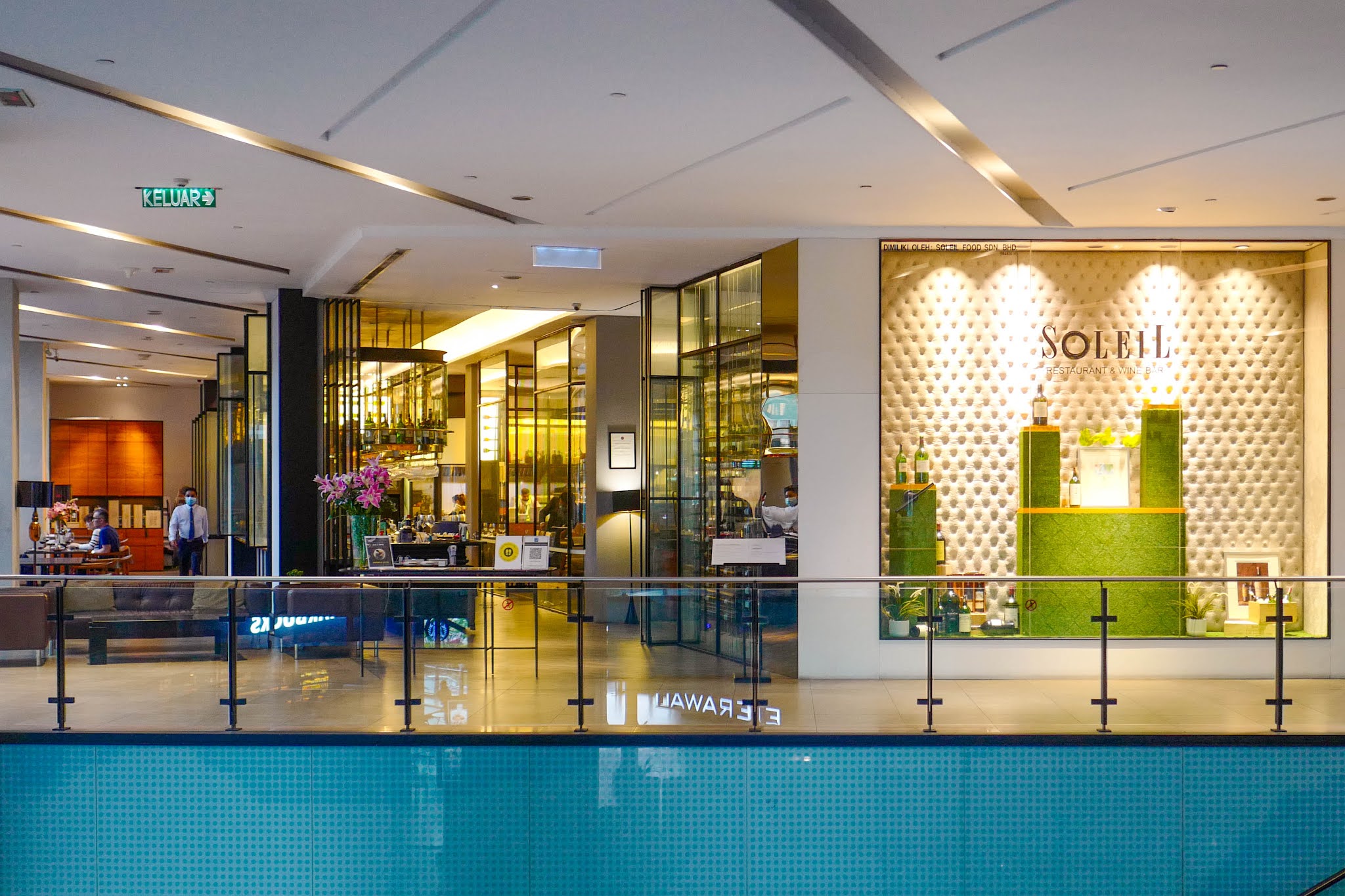 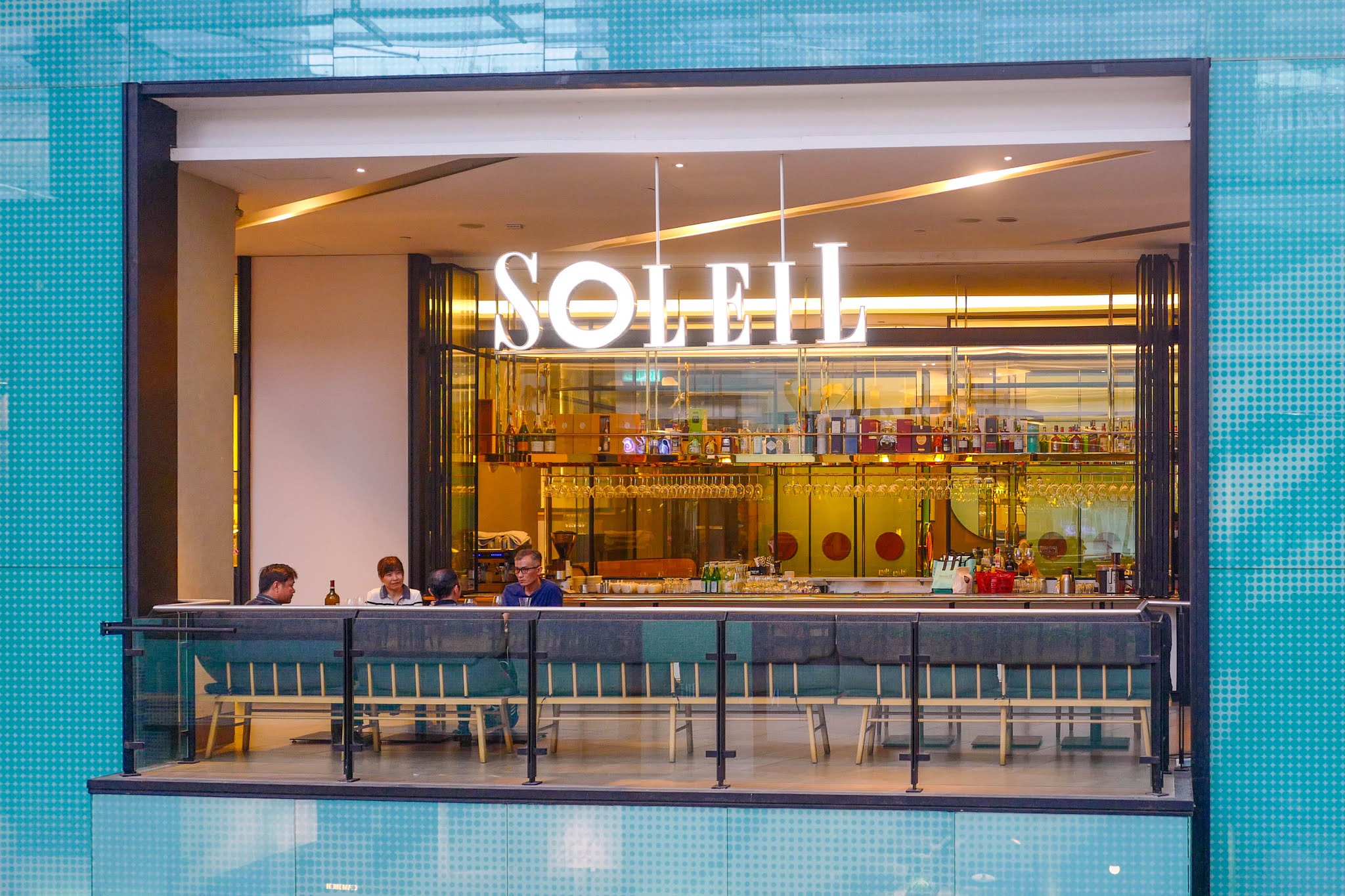 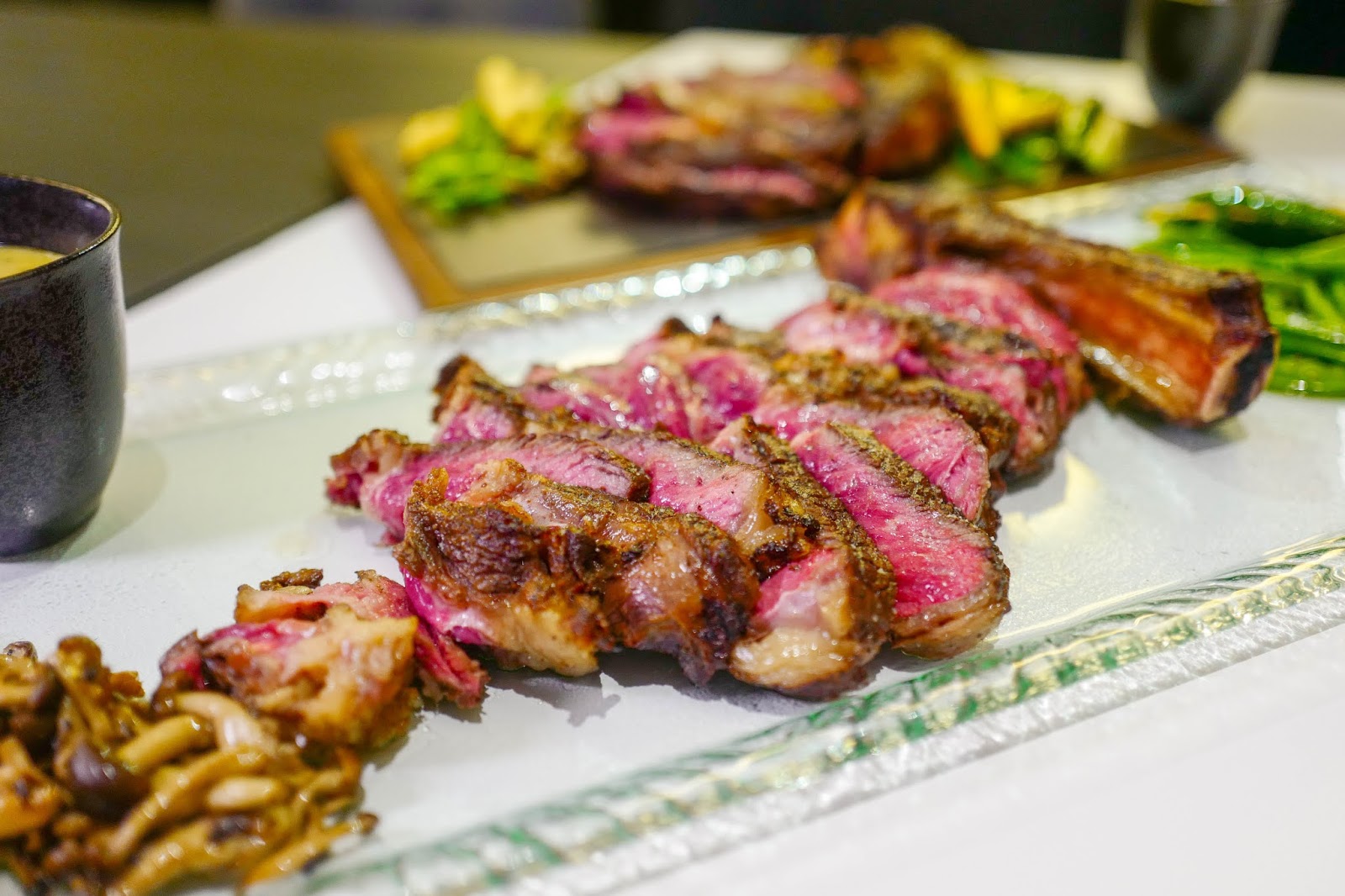