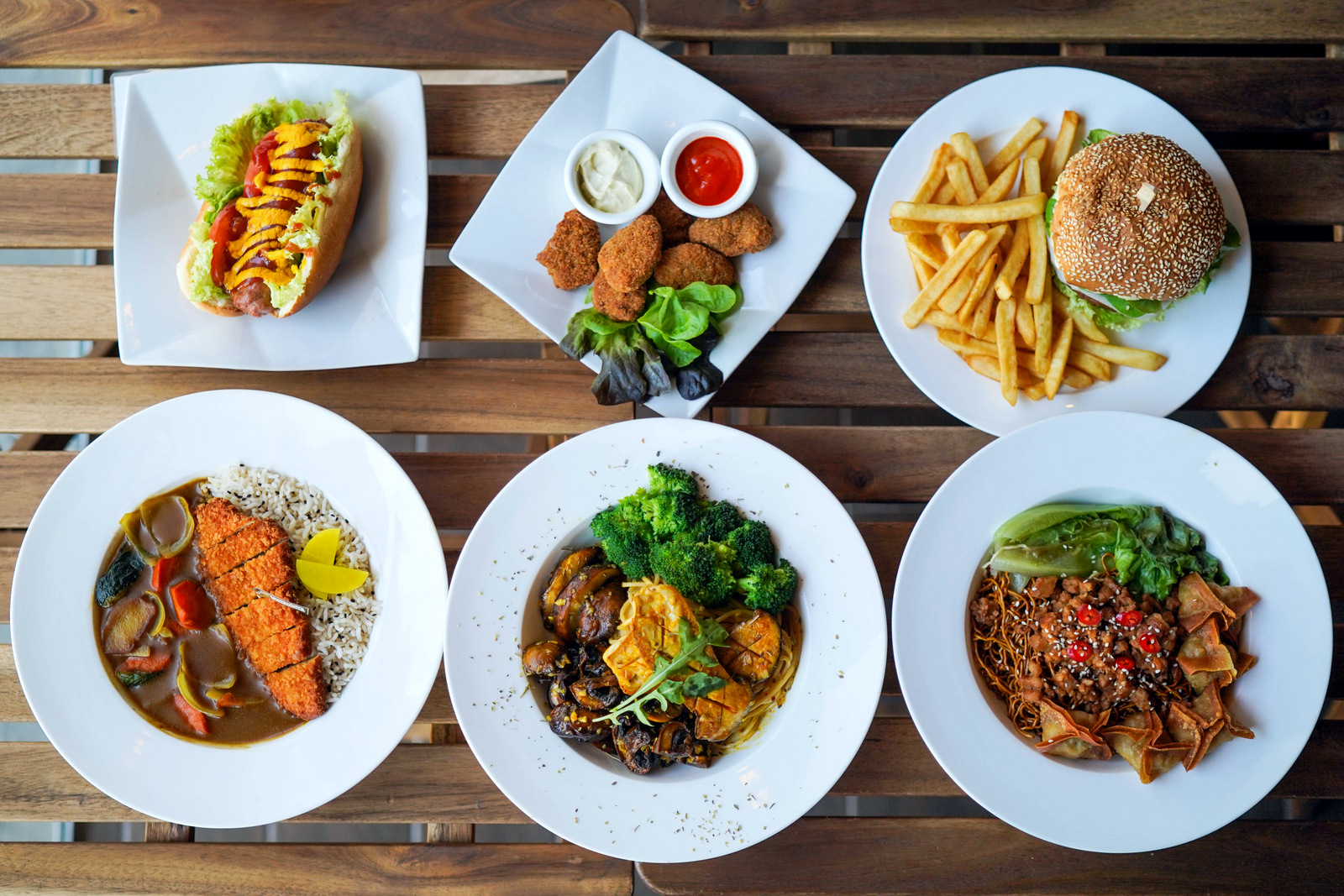 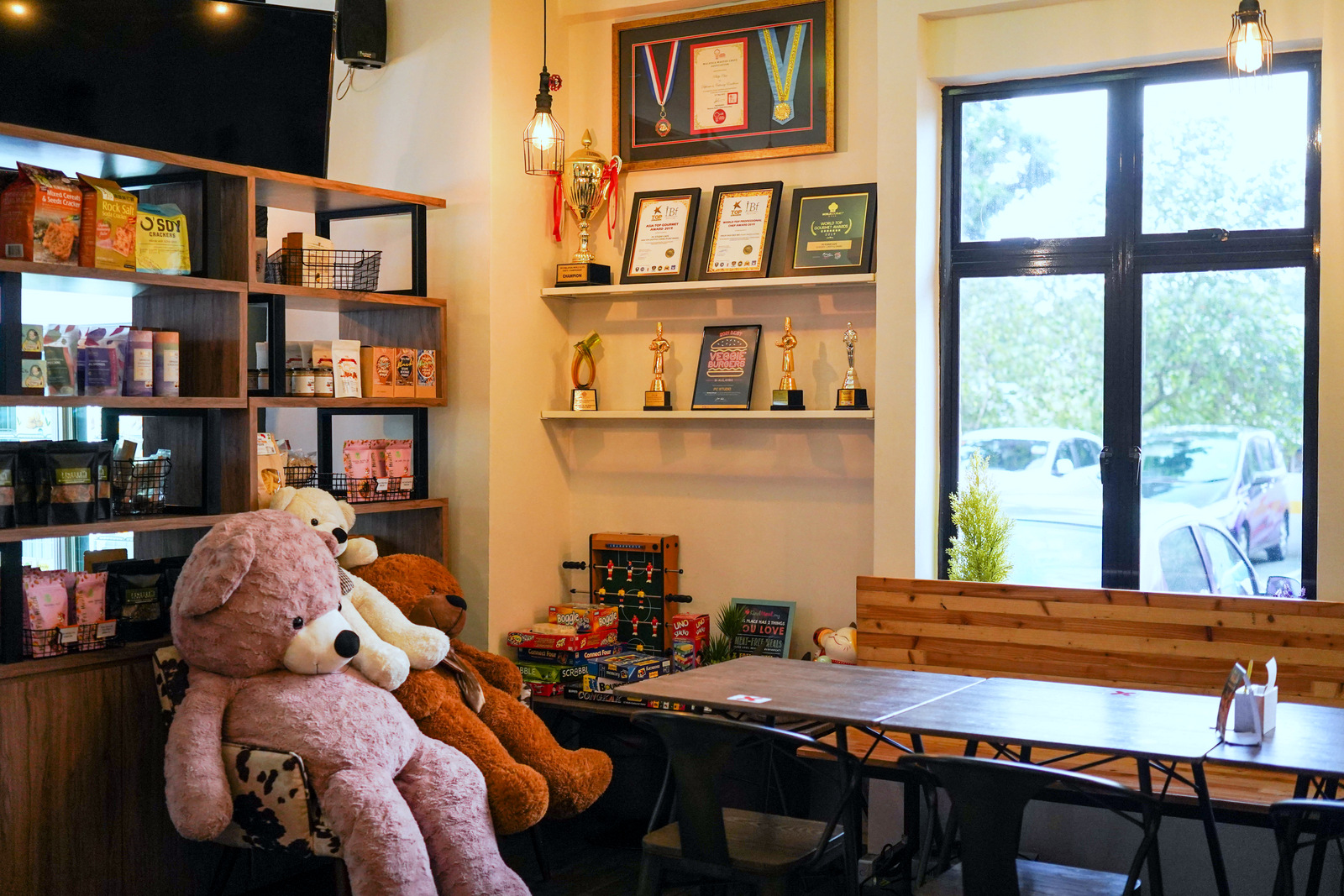 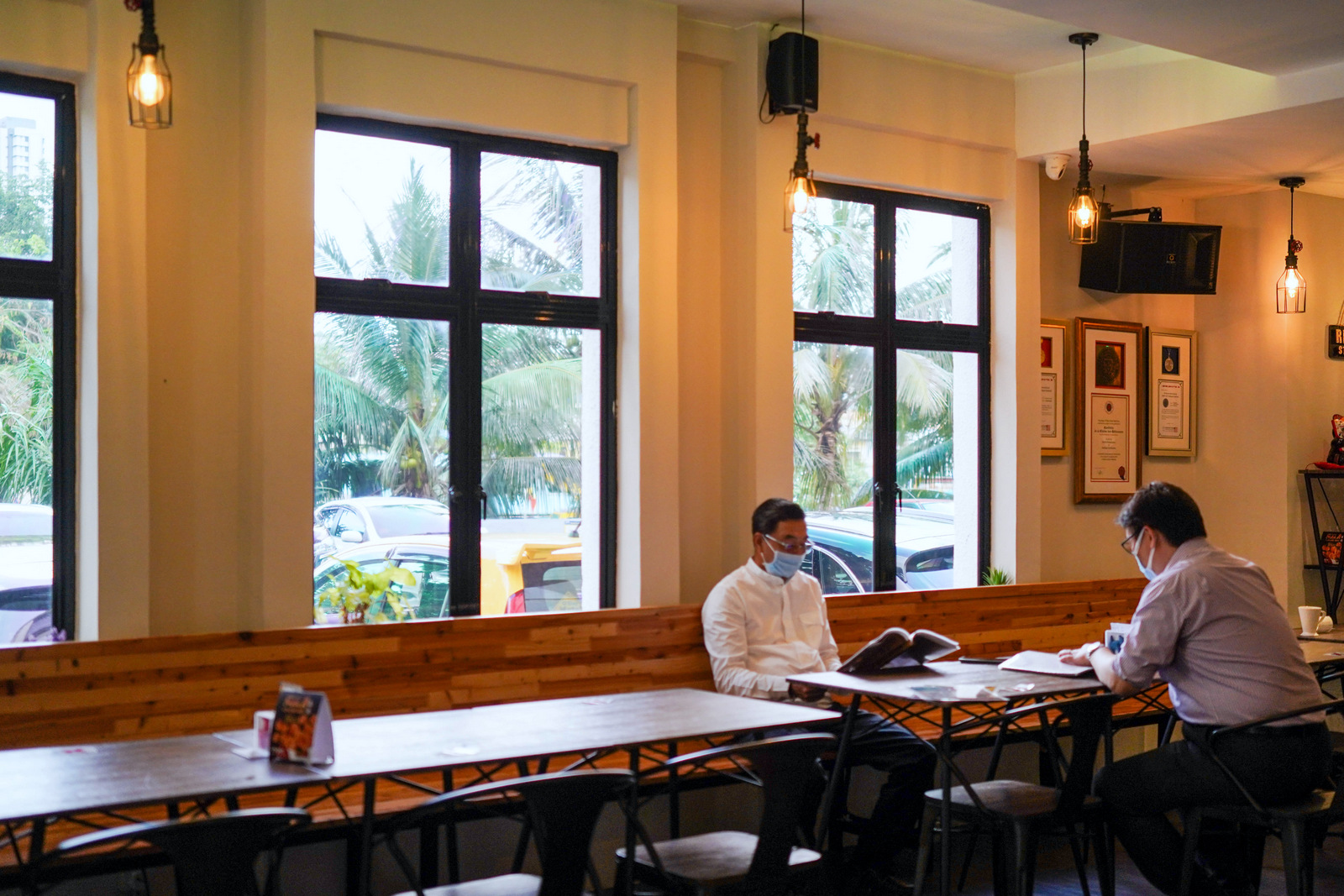 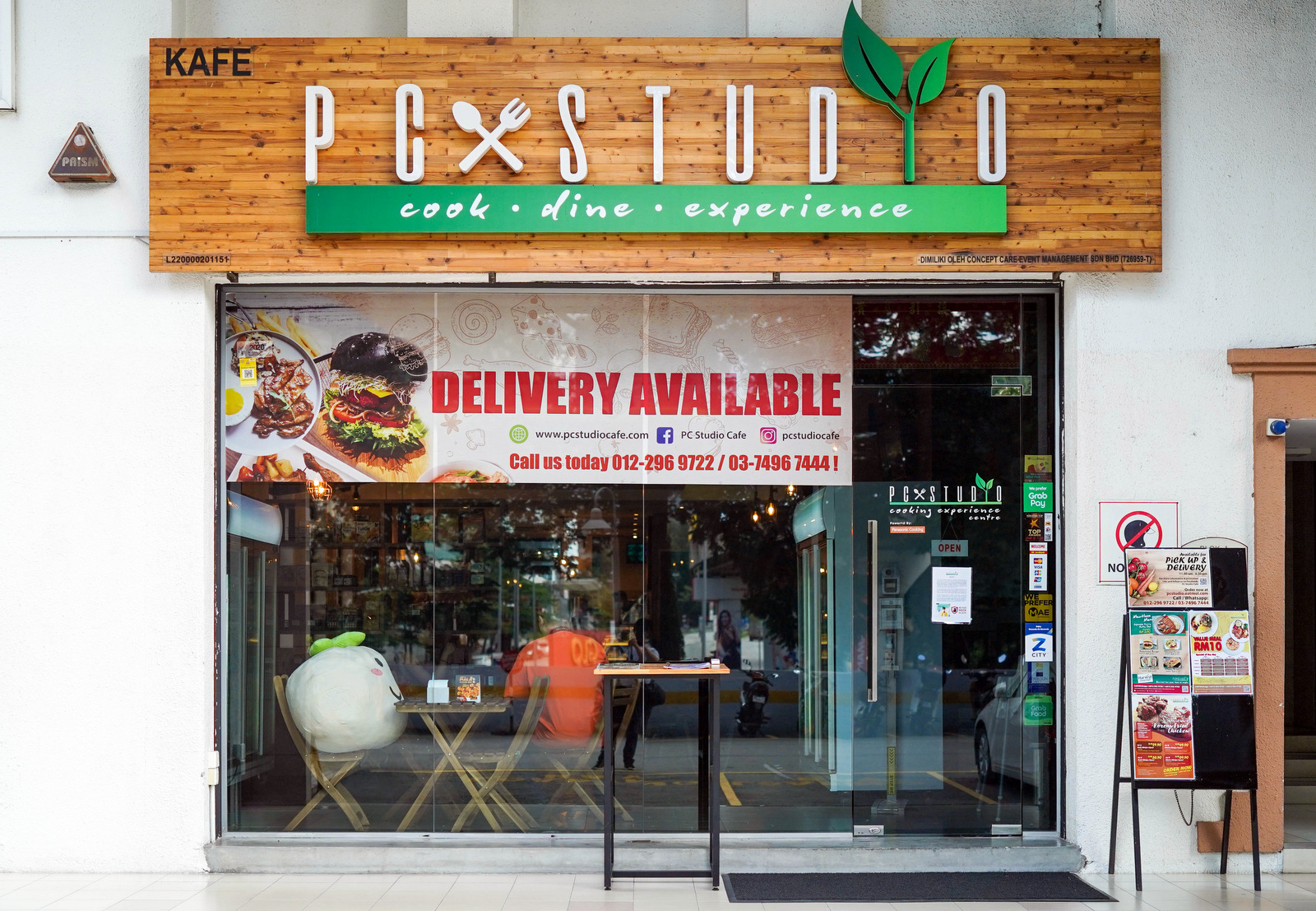 Meatless menus have muscled into the mainstream with a vengeance. In Manhattan, the three Michelin-starred Eleven Madison Park, one of the world's most acclaimed restaurants, announced in May that it was abandoning all animal products, including meat and seafood, in favour of plant-based dishes.
Closer to home, a plant-powered revolution is brewing in Petaling Jaya's PC Studio Cafe, dedicating a major part of its menu to meat-free burgers and hot dogs, pastas and noodles, crafted with everything from mushroom patties to vegan ham to soy nuggets, bolstered by a bevy of vegetables, herbs and ELAIESE red palm fruit oil.
PC Studio Cafe not only relies in reputable, well-known brands like Phuture Food, Beyond Meat and Harvest Gourmet for its plant-based ingredients, it has even innovatively developed its own NangkaRia jackfruit-centred products, a locally cultivated powerhouse of protein.
If you're seeking more meat alternatives for your meals, PC Studio Cafe is a pioneering force that's worth exploring, with certified plant-based instructors overseeing its offerings from conception to cooking.
Note that PC Studio Cafe remains open throughout this period and is available for orders and deliveries through its hotline, social media and delivery platforms including AirAsia Food. Contact them at 012-296-9722 or 012-533-9722 to order. 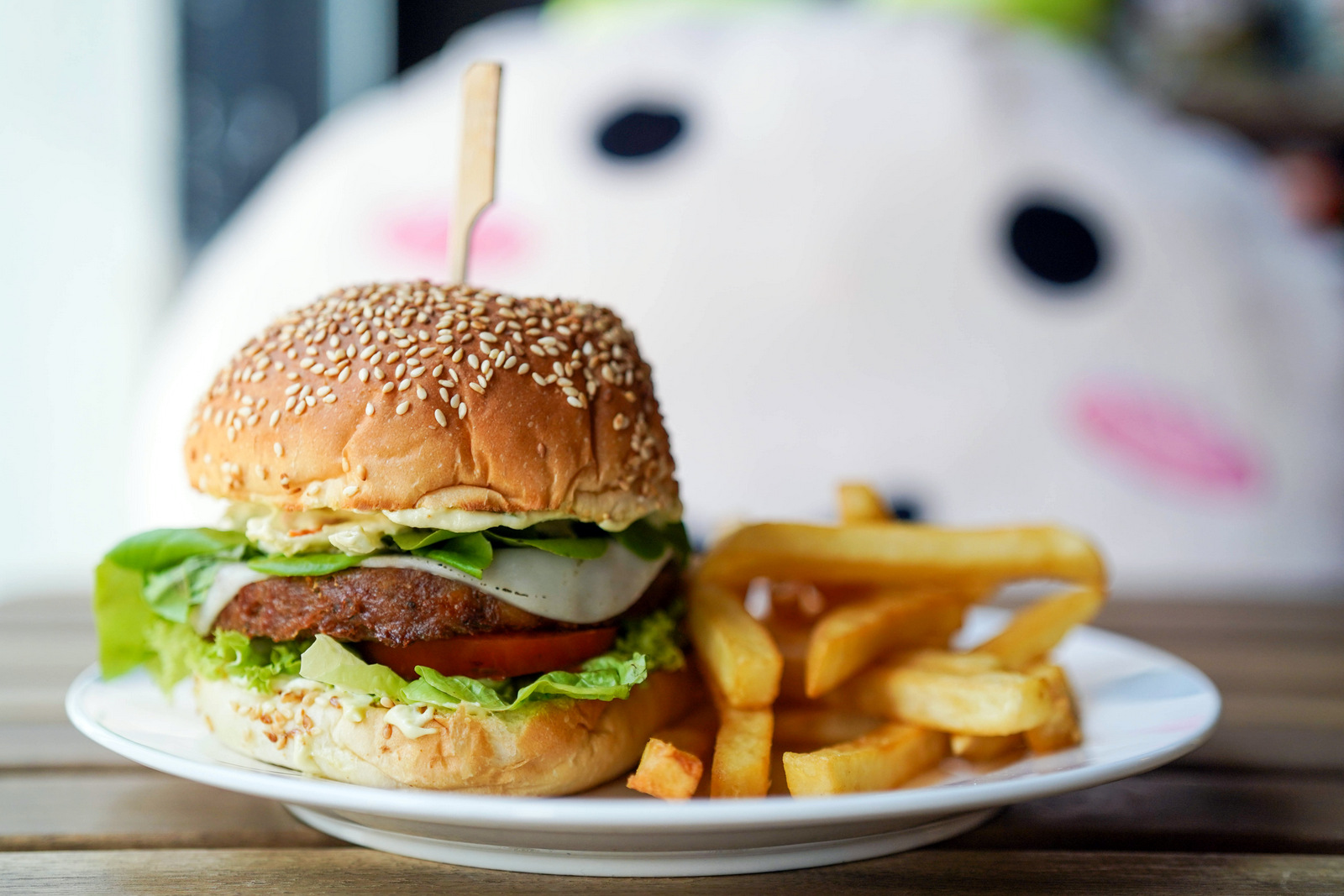 PC Studio Cafe has served plant-based fare to balance its regular menu since its birth in 2018, but its efforts have won fresh momentum this past year.
PC Studio Cafe's father-and-son founders, Philip and Edward Chui, have teamed up with collaborators The 6th Protein to create NangkaRia, an alternative protein made with jackfruits grown in a 10,000-acre farm in Lanchang, Pahang.
For the first recommended taste of NangkaRia's patties, order The OG, a 100% plant-based burger with house-made cashew mayo, plant-based cheese and fresh greens between a plant-based bun, complete with fries. The patty is densely tender, made with jackfruit, soy chunks and soy protein for a creamy mouthfeel.
PC Studio Cafe emphasises that NangkaRia's products are not meant to imitate meat or taste like chicken or beef. Instead, this is plant-based protein that's purely natural, whole and energy-efficient, respecting the harvest of farmers and supporting their livelihoods.
Though these patties might not combat carnivorous cravings, they make for a fulfilling burger in their own right, with a satisfyingly savoury flavour that's far from bland and a rich texture to sink your teeth into. No surprise - PC Studio Cafe comprises food experts who partner professionally with top cooking equipment brands and conduct culinary workshops. 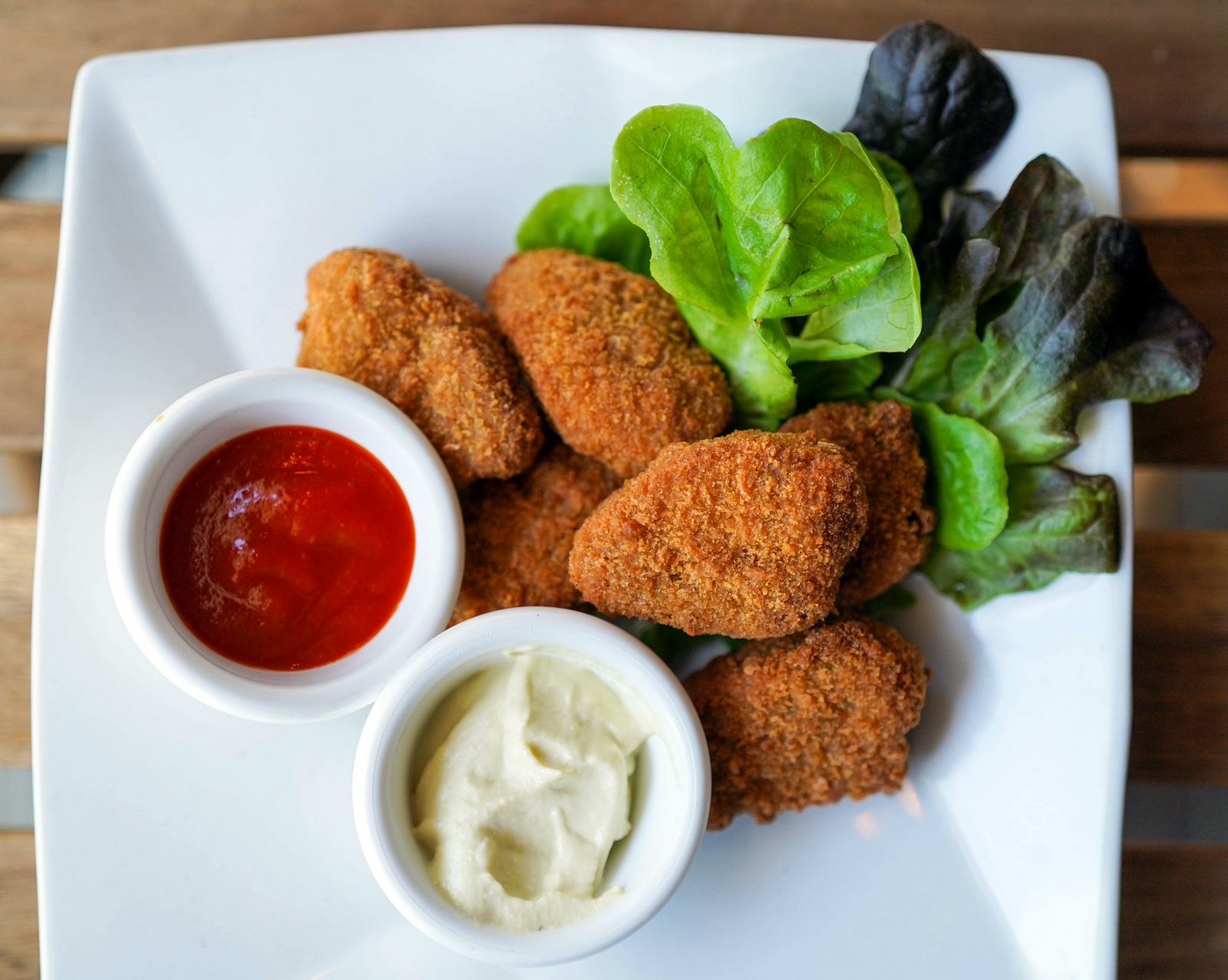 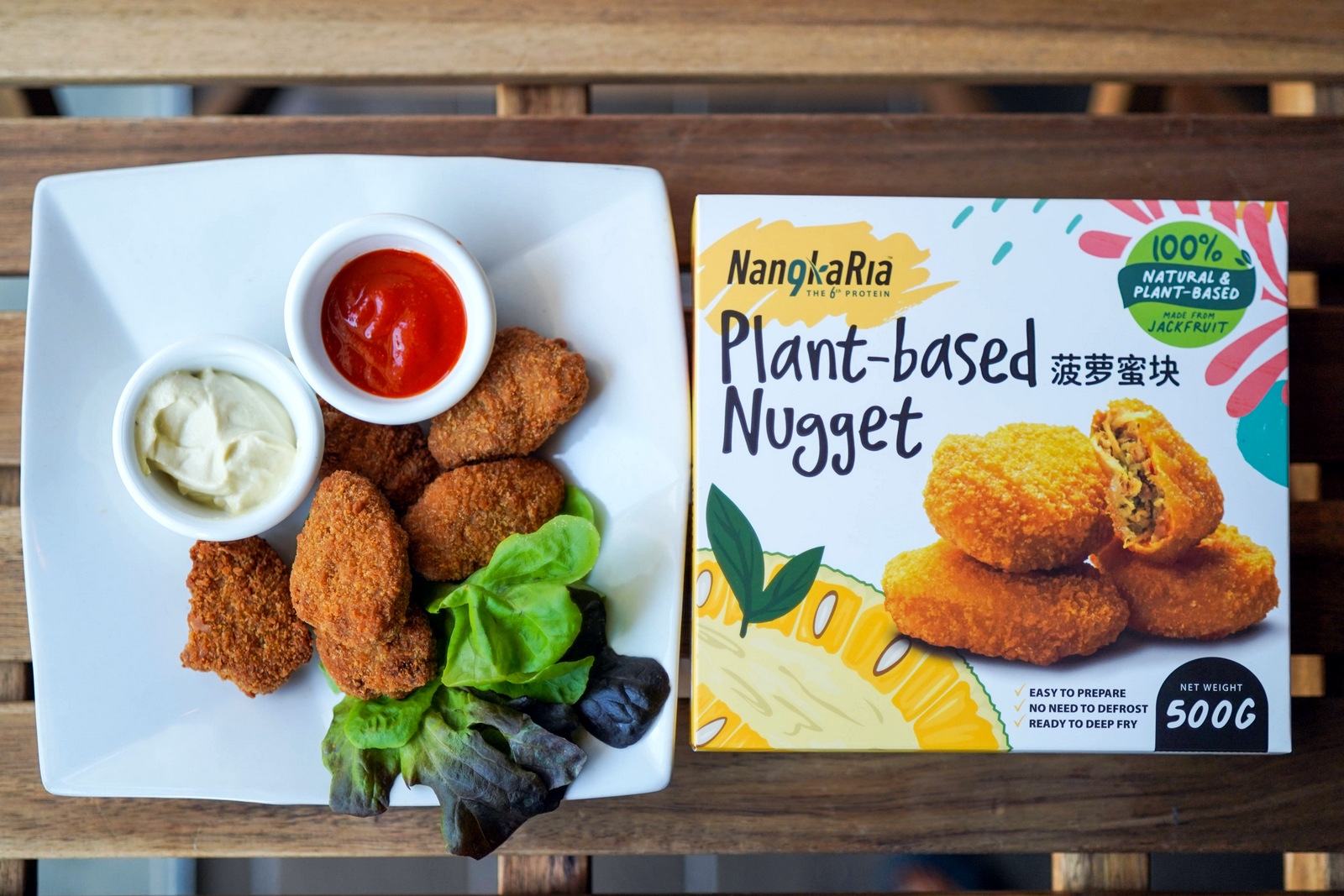 Customers can soon order a variety of NangkaRia patty flavours here, from curry to Korean to Thai - for now, you can purchase NangkaRia's nuggets, made with jackfruit and soy proteins, to bring home or enjoy at the cafe.

These family-friendly treats, crunchy to the bite and supple to the chew, are preservative-free, very low in saturated fat, with less sodium, so they're a healthier option than chicken nuggets. Thankfully for kids, they're moreishly munch-worthy, free of gluten and MSG, with minimal processed ingredients and without the lab-produced artificiality that plagues mock-meat nuggets.

Our nuggets came with what looks like ketchup but is PC Studio Cafe's spicy-tangy paparacha, papaya sriracha brightened with apple cider vinegar that functions as a natural preservative. 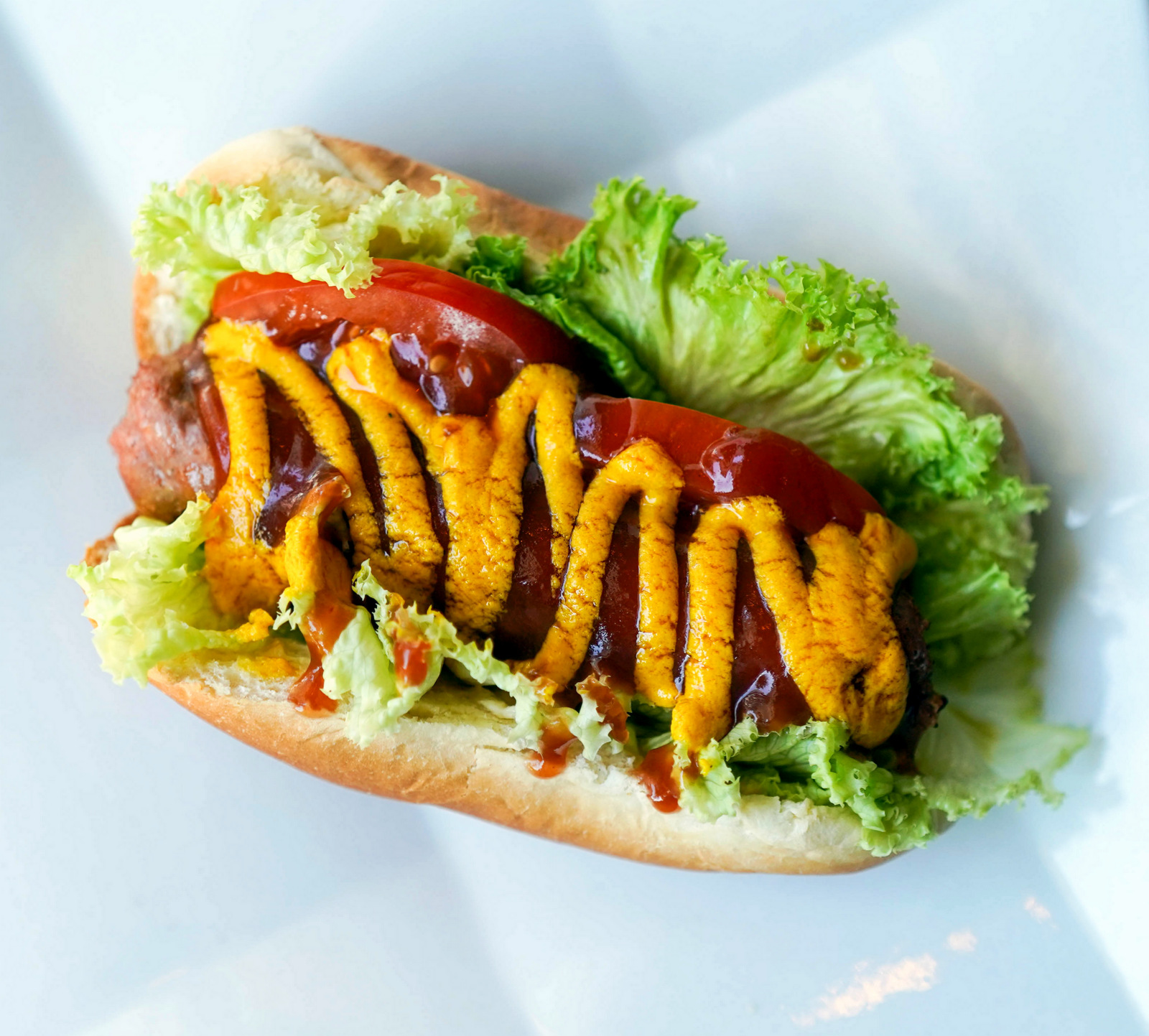 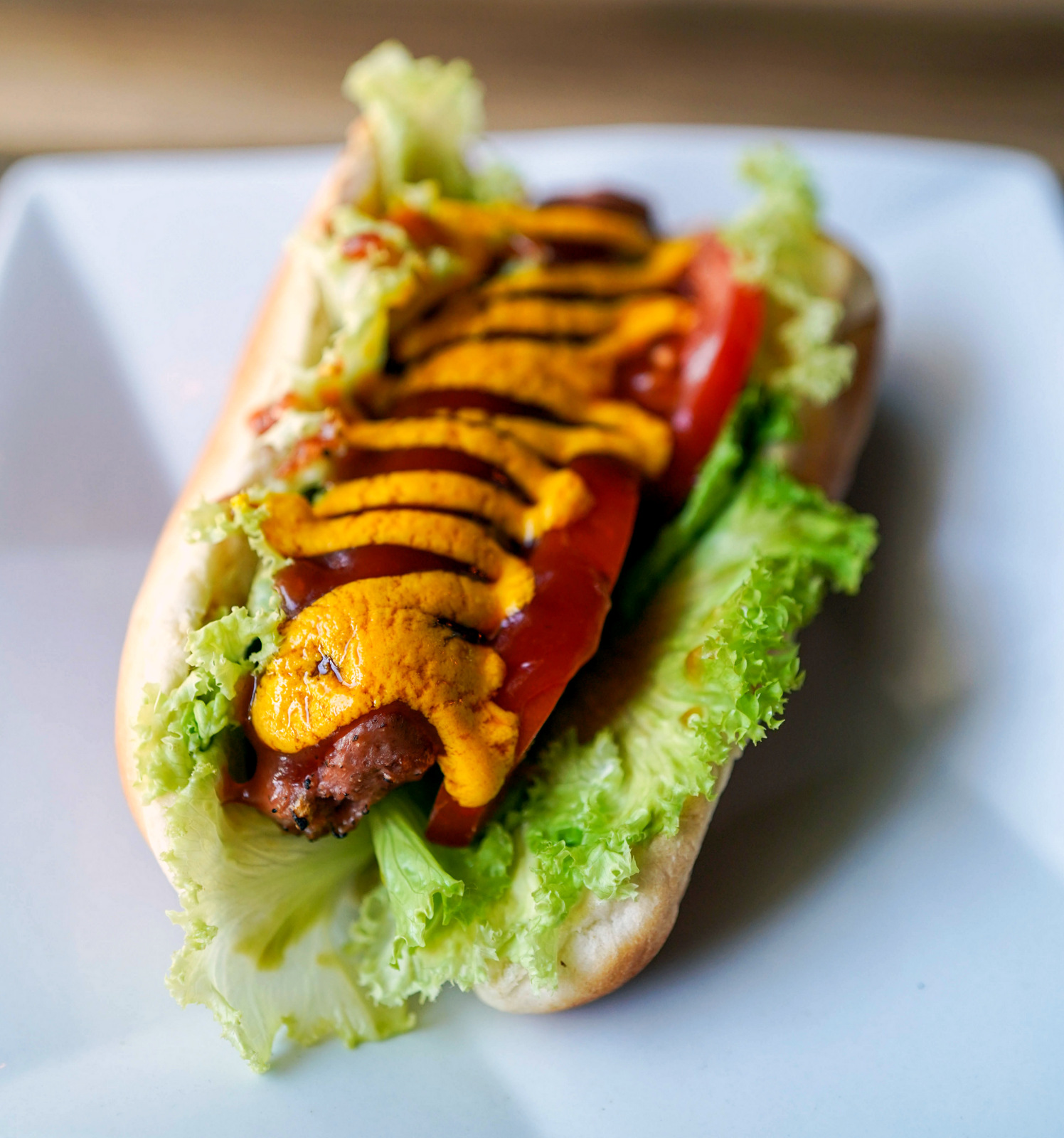 Beyond NangkaRia, PC Studio Cafe promises an extensive selection that includes Beyond Meat's Beyond Sausages - have it in the hot dog, drizzled with luscious plant-based vegan mustard mayo.

PC Studio Cafe's culinary team includes seven certified raw vegan and plant-based chefs who strive to work with the most wholesome produce, focused on informed, fact-based determinations, having even travelled to Thailand in past years to study plant-based diets more deeply.

Their mustard mayo is made fresh, with an attractively vibrant hue and smooth richness derived from ELAIESE premium red palm oil, a superfood packed with phytonutrients, including Pro-Vitamin A and Vitamin E Tocotrienols, which curb cholesterol, boost immune health, and buoy hair and skin health.

Similar to how NangkaRia's jackfruit is sourced from one farm, ELAIESE's oil is sustainably cultivated by Sime Darby Oils Nutrition in a single-origin plantation on Carey Island, Selangor. It retains its rich nutrients as the palm fruit is collected and processed within 24 hours of harvest to limit oxidisation. 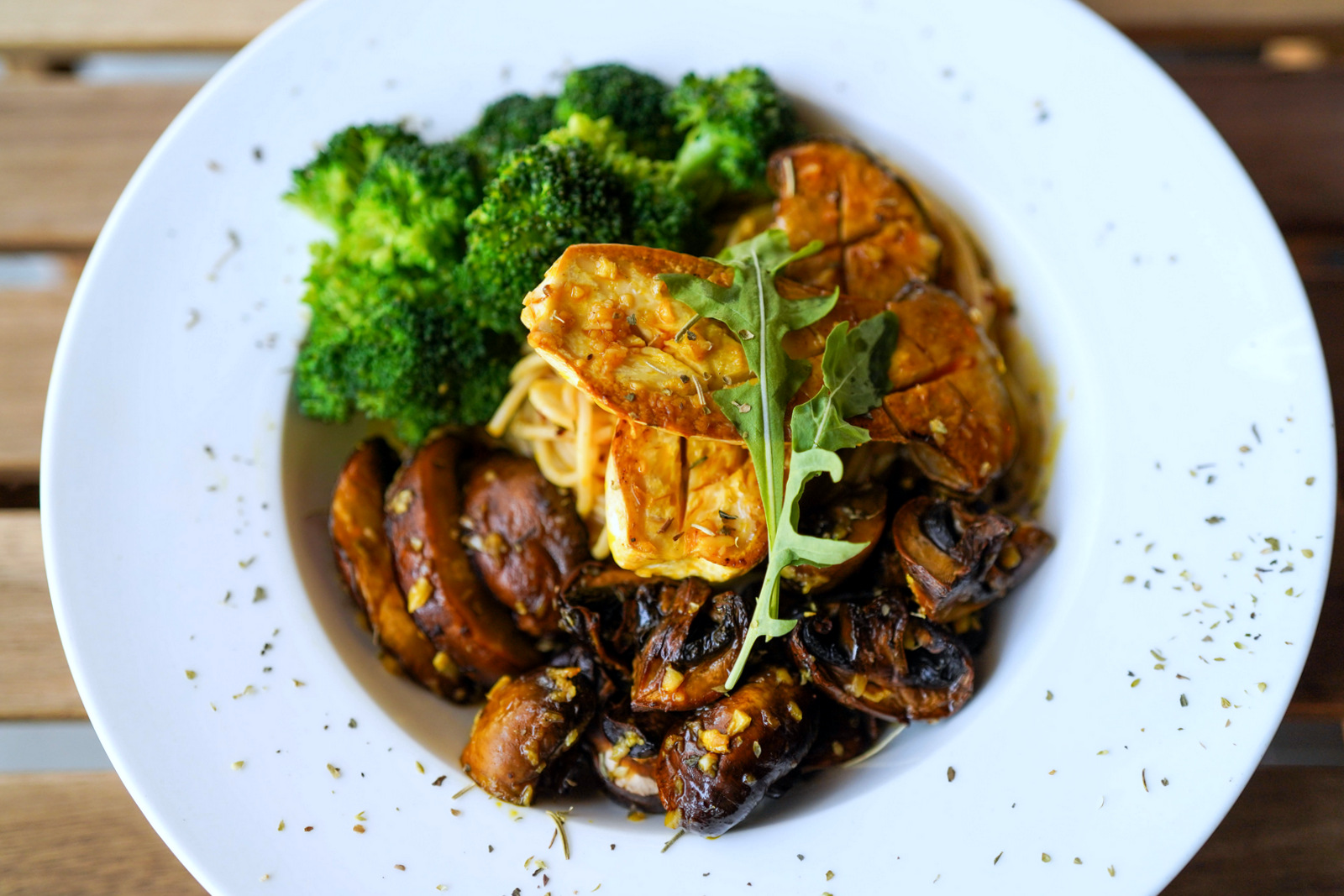 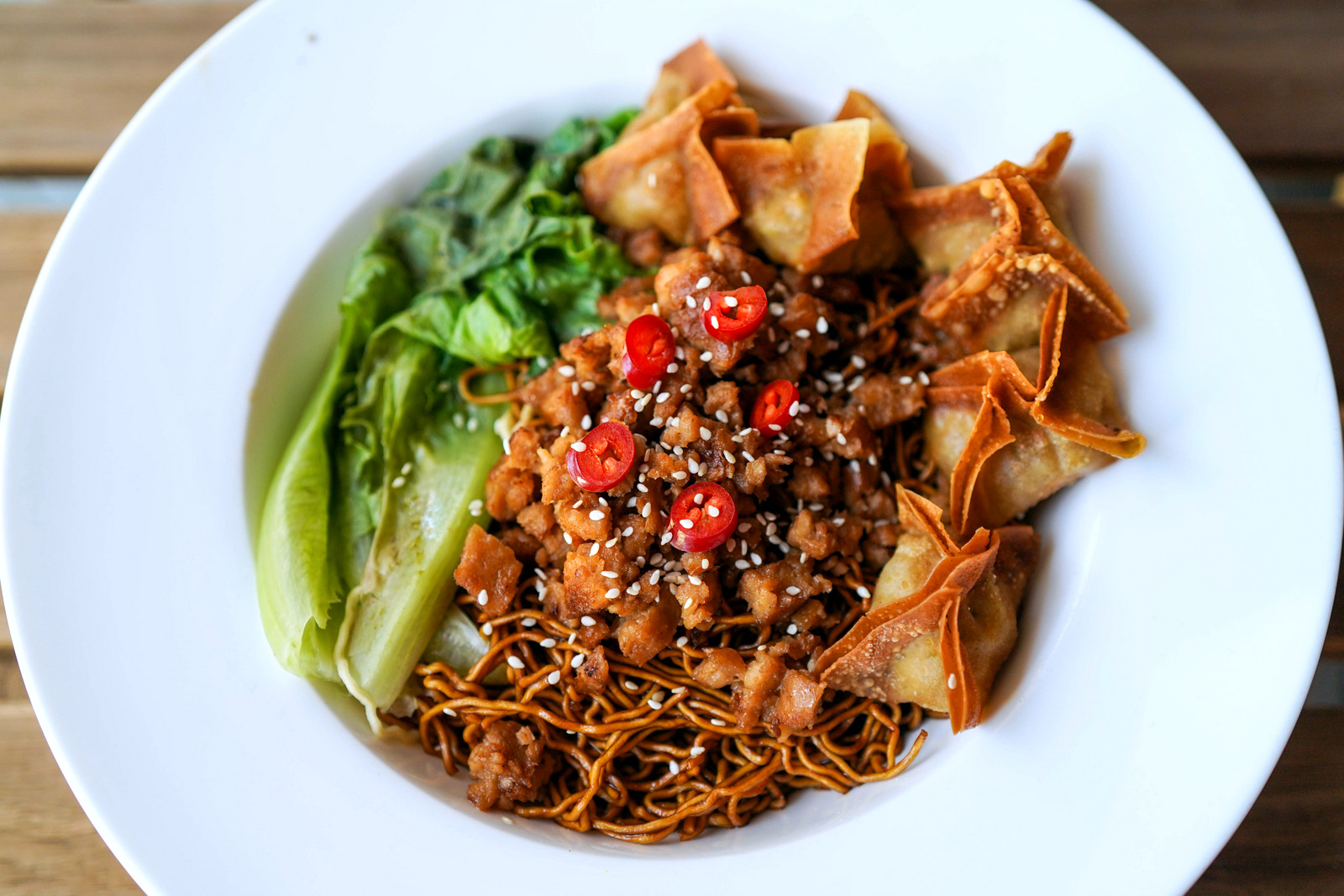 The Golden Aglio Olio Pasta is loaded with the earth's bounty, blanketed with button mushrooms, portobello mushrooms, king oyster mushrooms and broccoli, all thick and juicy, over spaghetti with garlic and chilli flakes.

It's a top-notch pasta with a twist that distinguishes it from typical aglio olio - instead of olive oil, the pasta is tossed in ELAIESE's red palm oil, which gives it a golden sheen, showcasing the oil's versatility in preparing food.

Prefer Asian noodles? The Emperor’s Noods (RM25.90) are as playful as the name suggests, with egg-free wheat flour noodles topped with Phuture Foods' plant-based minced 'meat,' on its own and in crisp wantans. It's a hearty, healthier take on wantan mee that retains the robustness of street-food flavours, built for big, bold appetites. 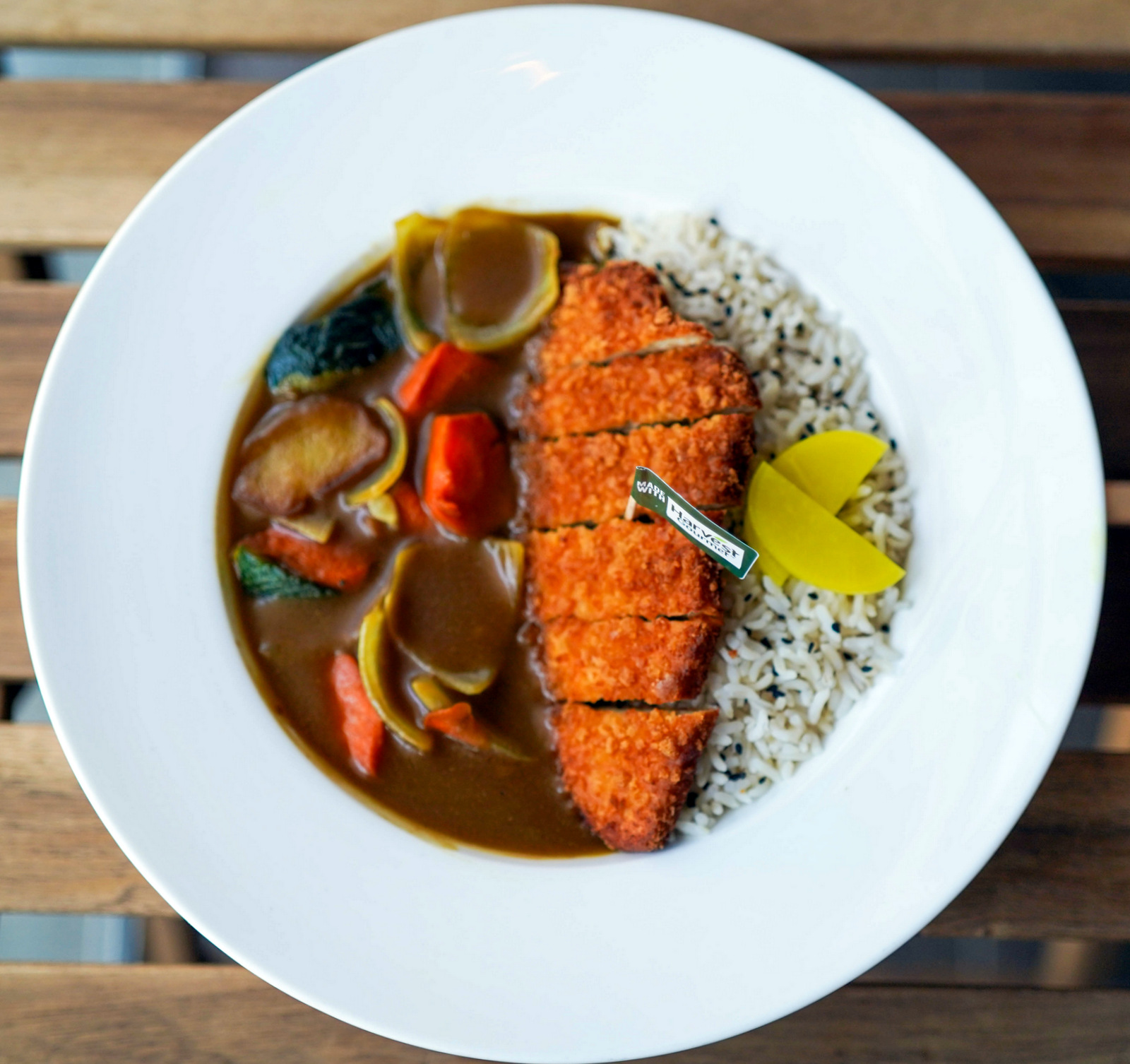 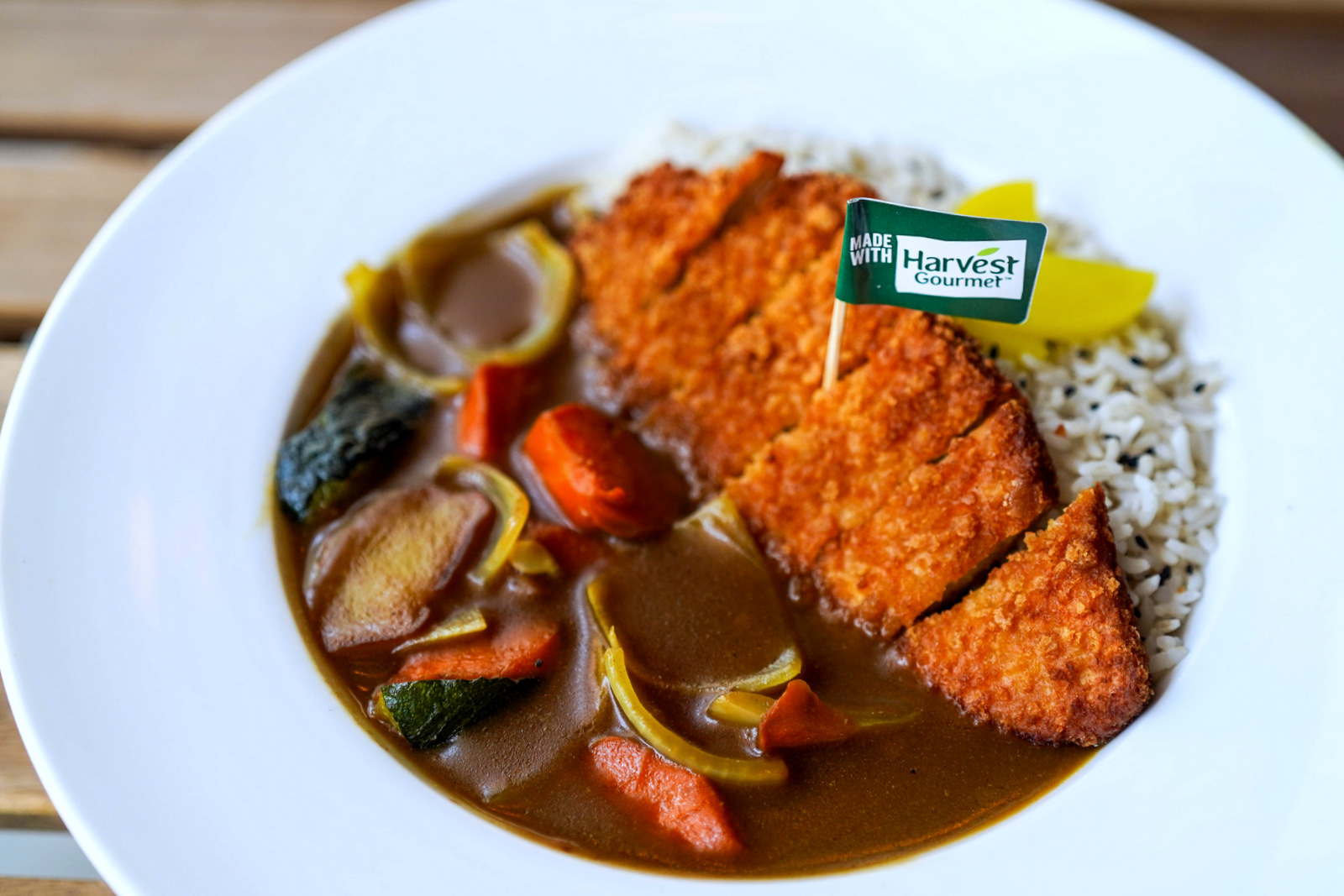 PC Studio Cafe uses specific fryers and kitchen equipment for its plant-based menu, separate from meat. Beyond the logistical thoughtfulness, the team has poured their talents and creativity into ensuring these recipes are no less enjoyable.

The Japanese Curry Katsu Don (RM25.90) could earn a spot in any good Japanese eatery, with the Harvest Gourmet brand's schnitzel-like cutlet as its centrepiece, complemented by a thick, mellow curry that's free of chicken stock or anchovy-derived dashi.

Complete comfort food, even for meat eaters, with carrots, potatoes and onions galore in the curry and pickles to jazz up the rice, uncompromisingly tasting like what you'd expect of Japanese curry katsu don. 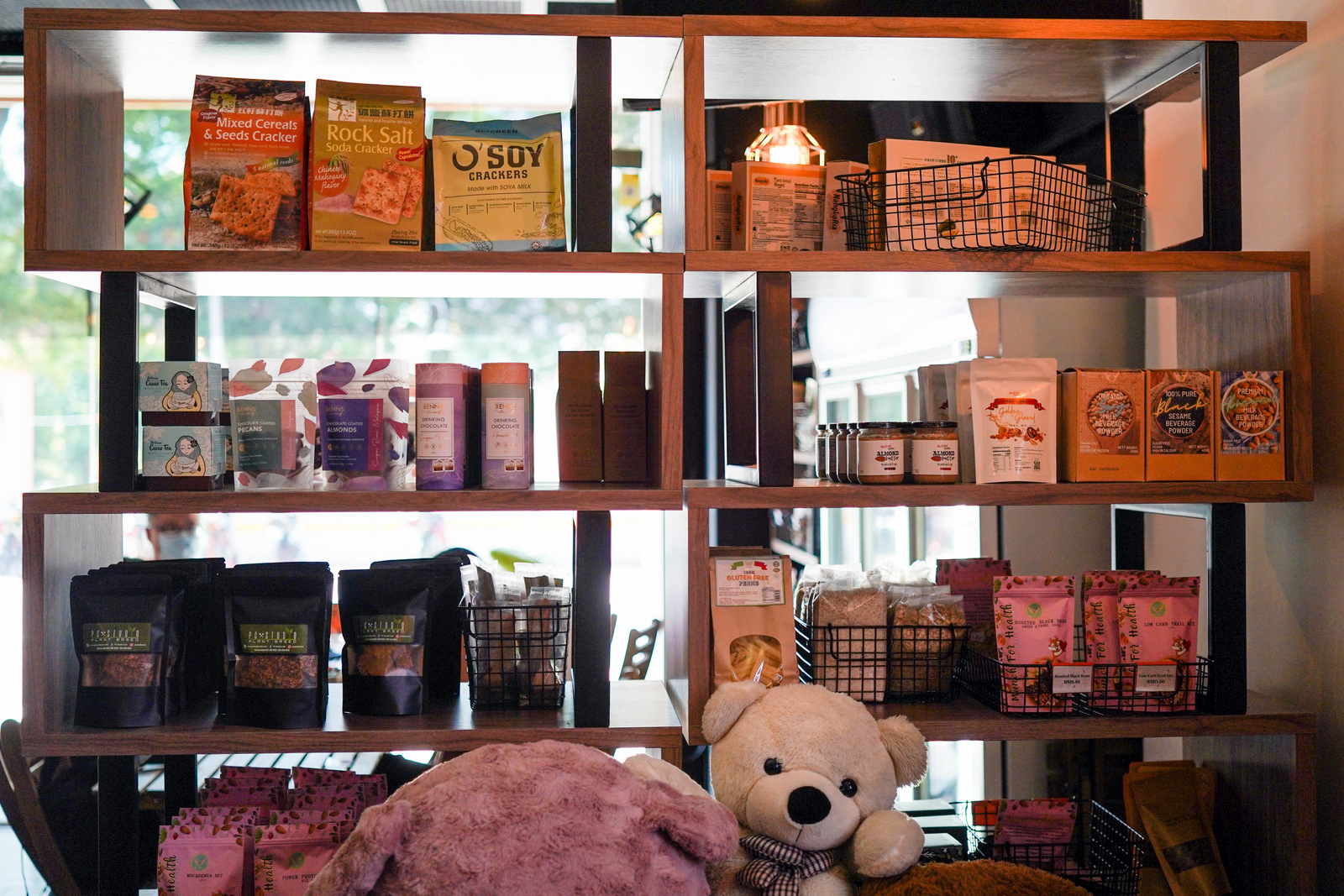 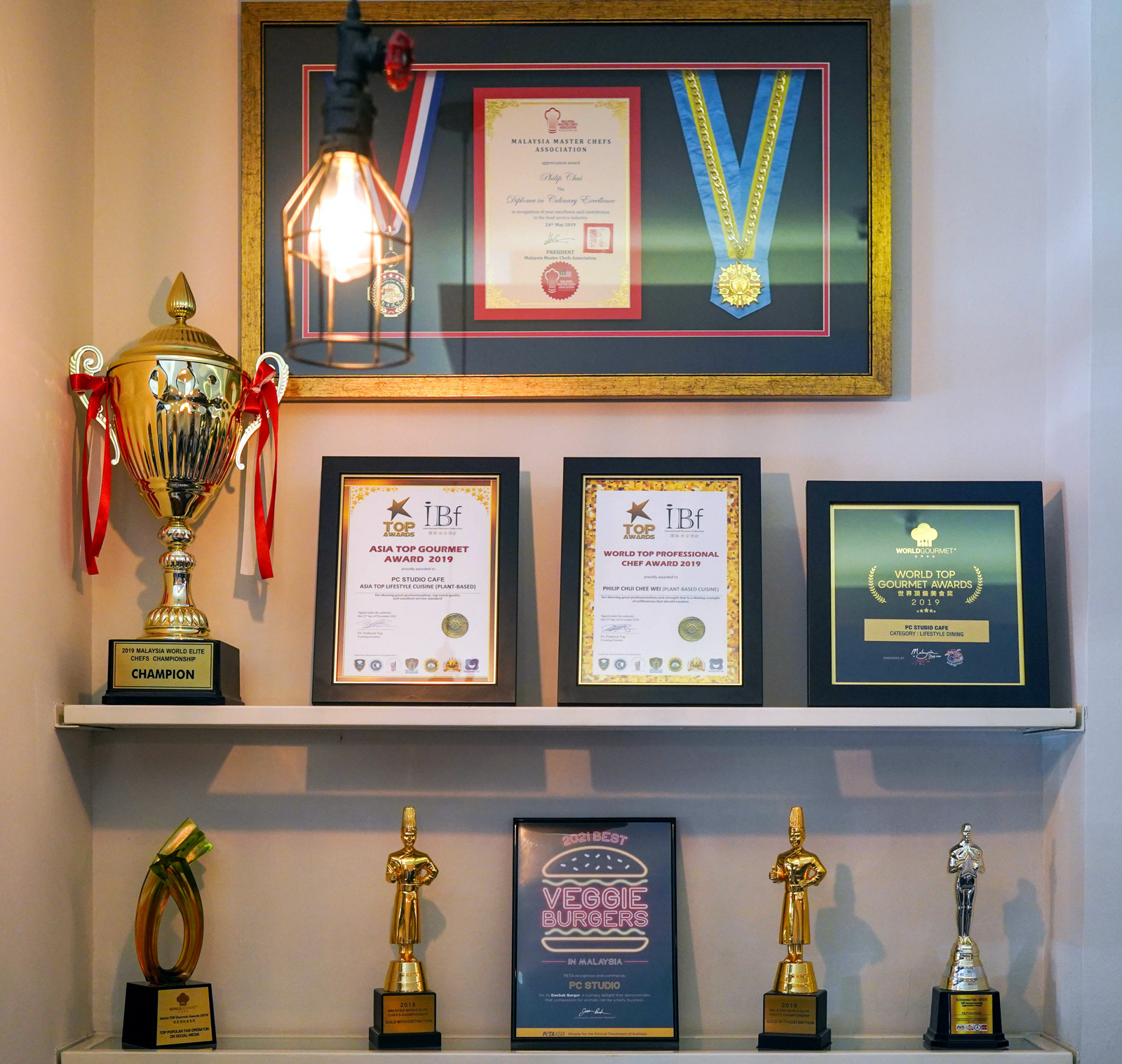 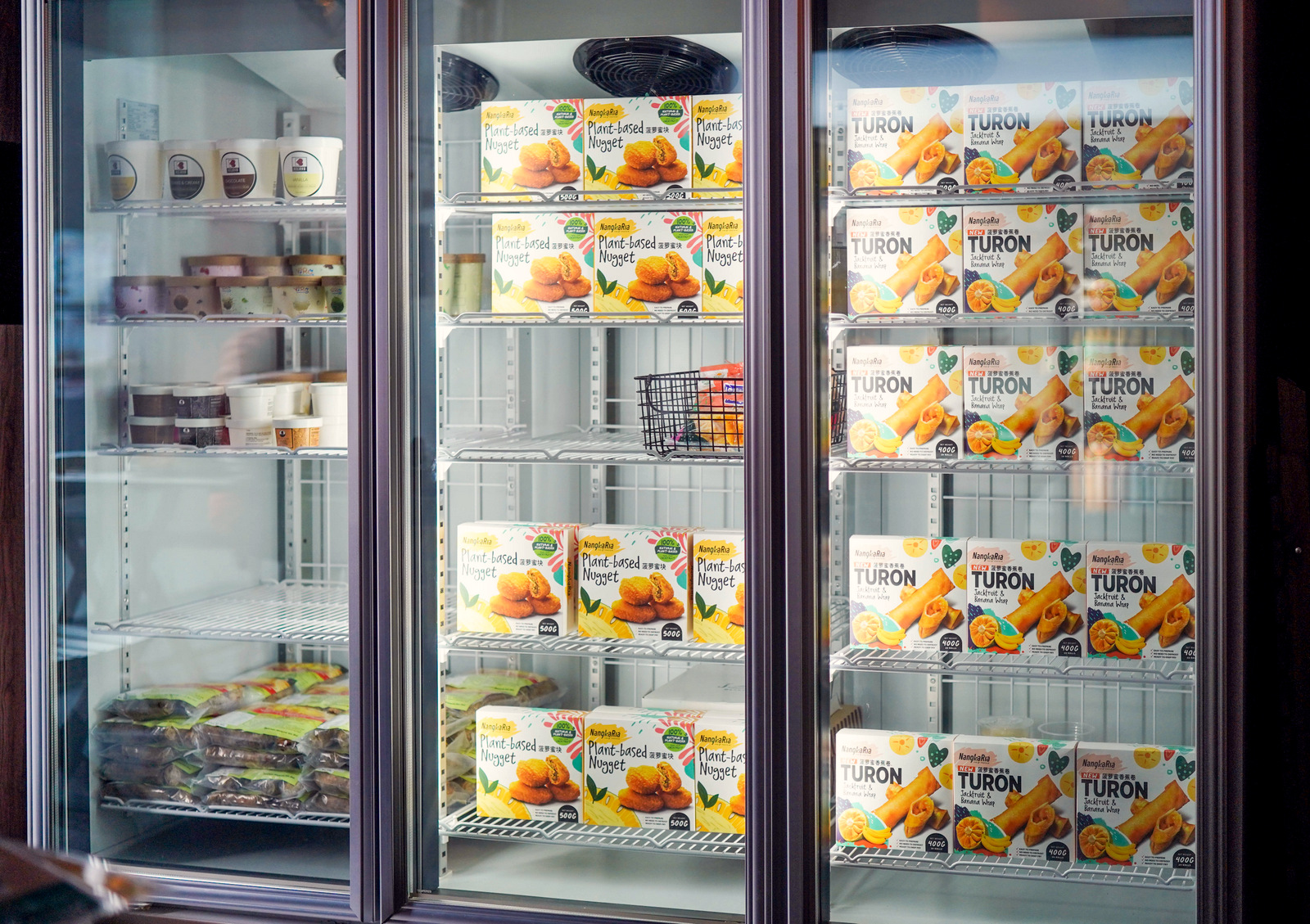 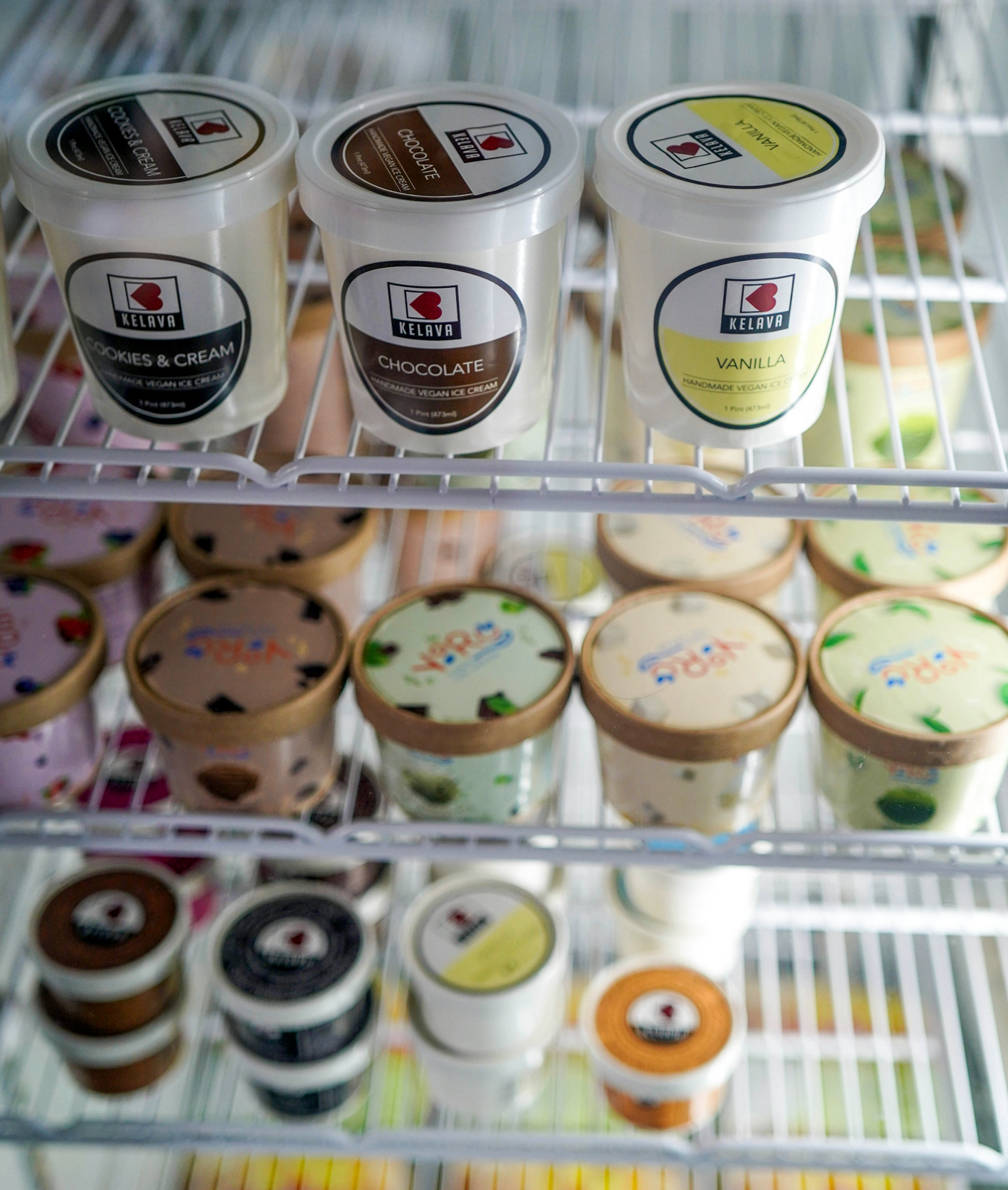 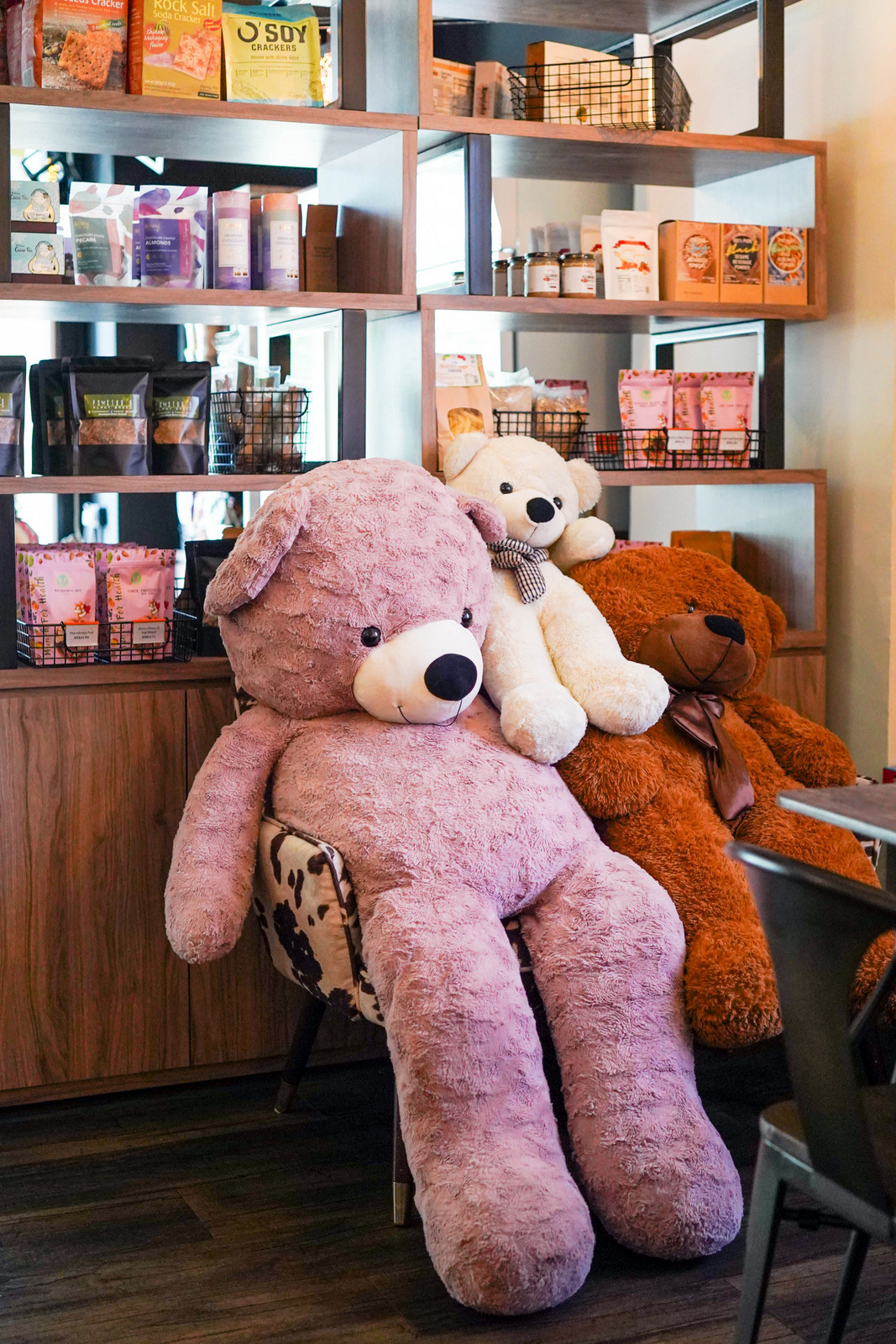 Malaysia's plant-based F&B market may have seemed like a minor niche several years ago, but PC Studio Cafe is now well-positioned to meet its steadily increasing needs - you can already shop here for plant-based snacks and treats, amid shelves lined beside the restaurant's chef awards and trophies.

Many thanks to the team here for having us. 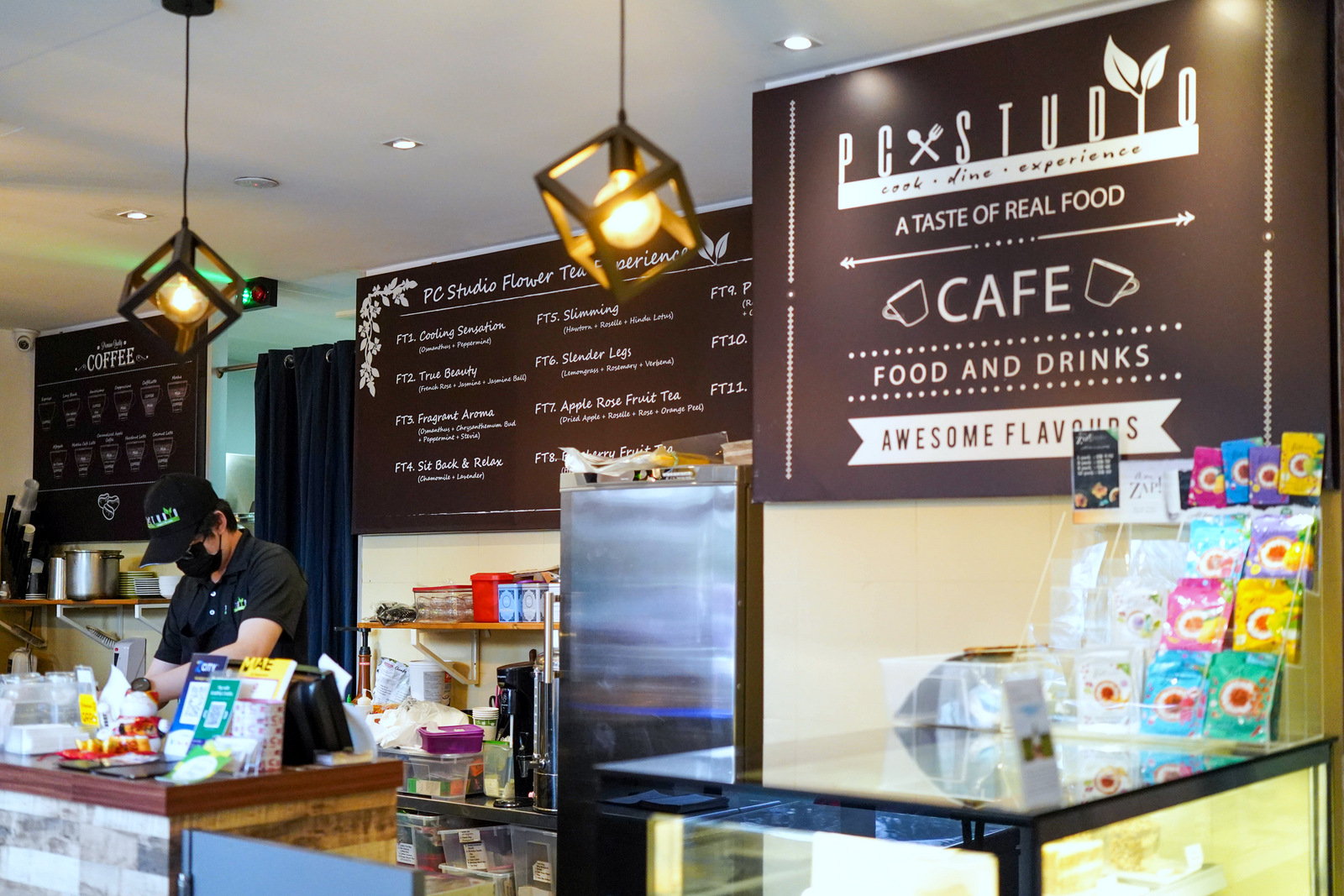 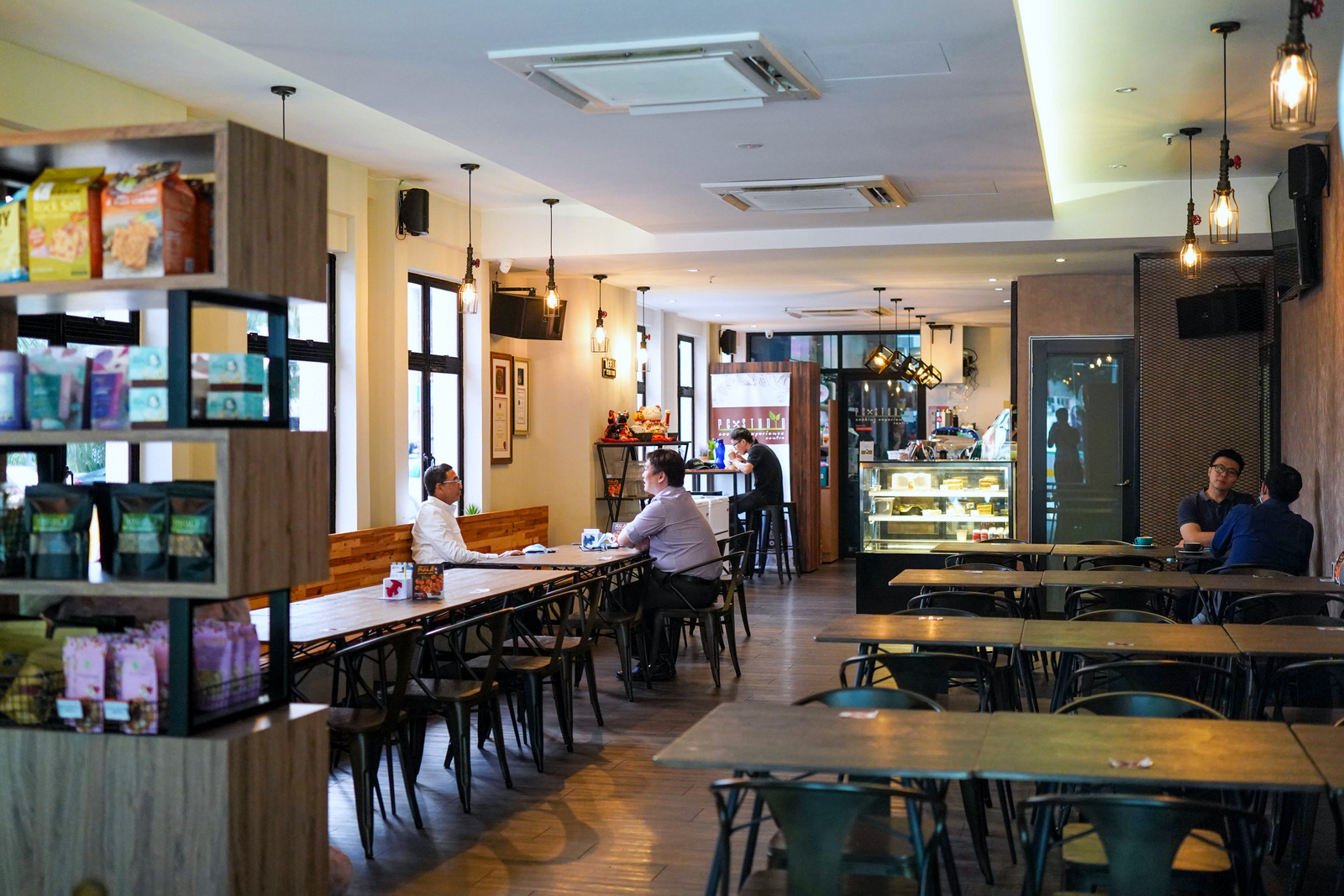 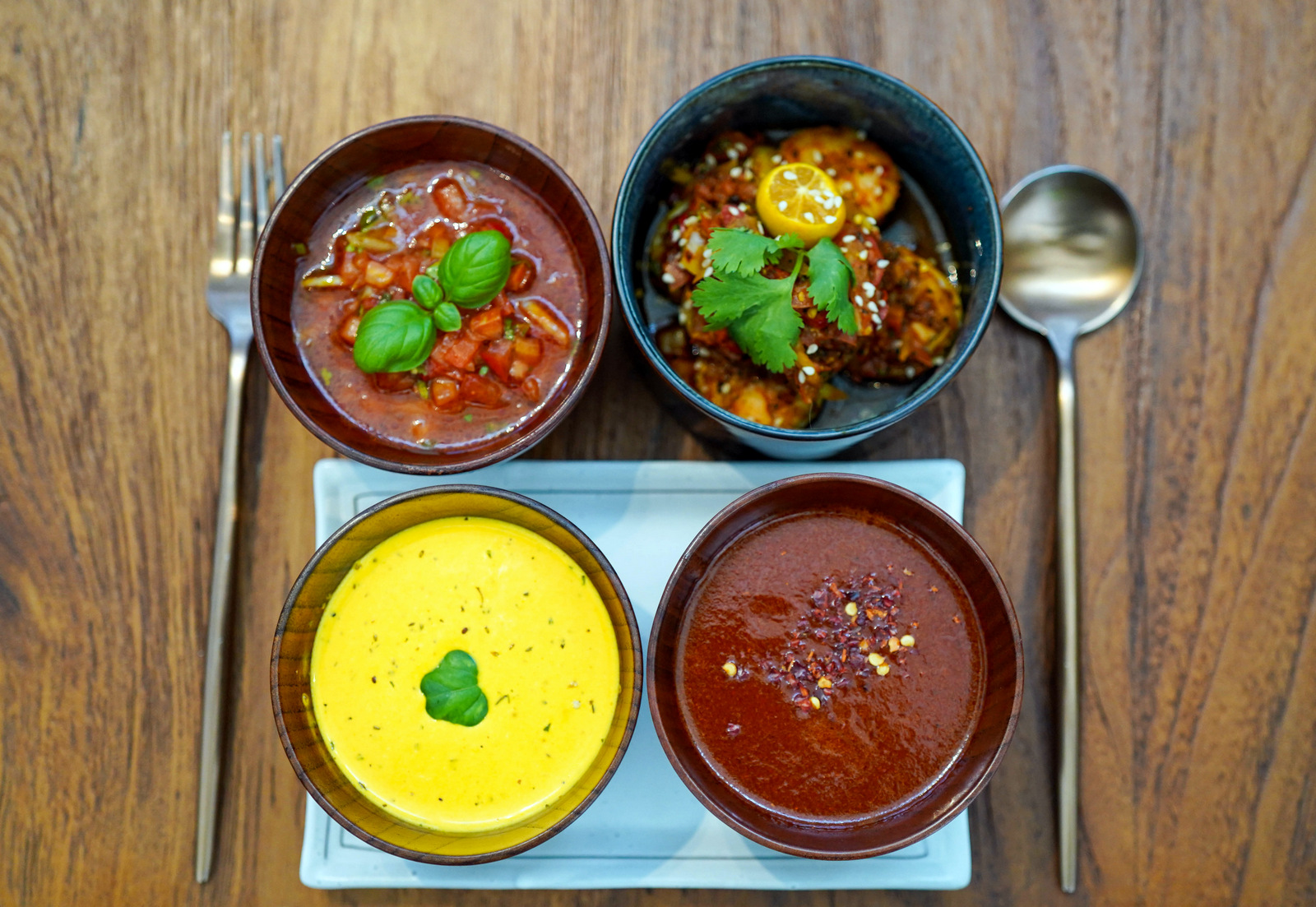 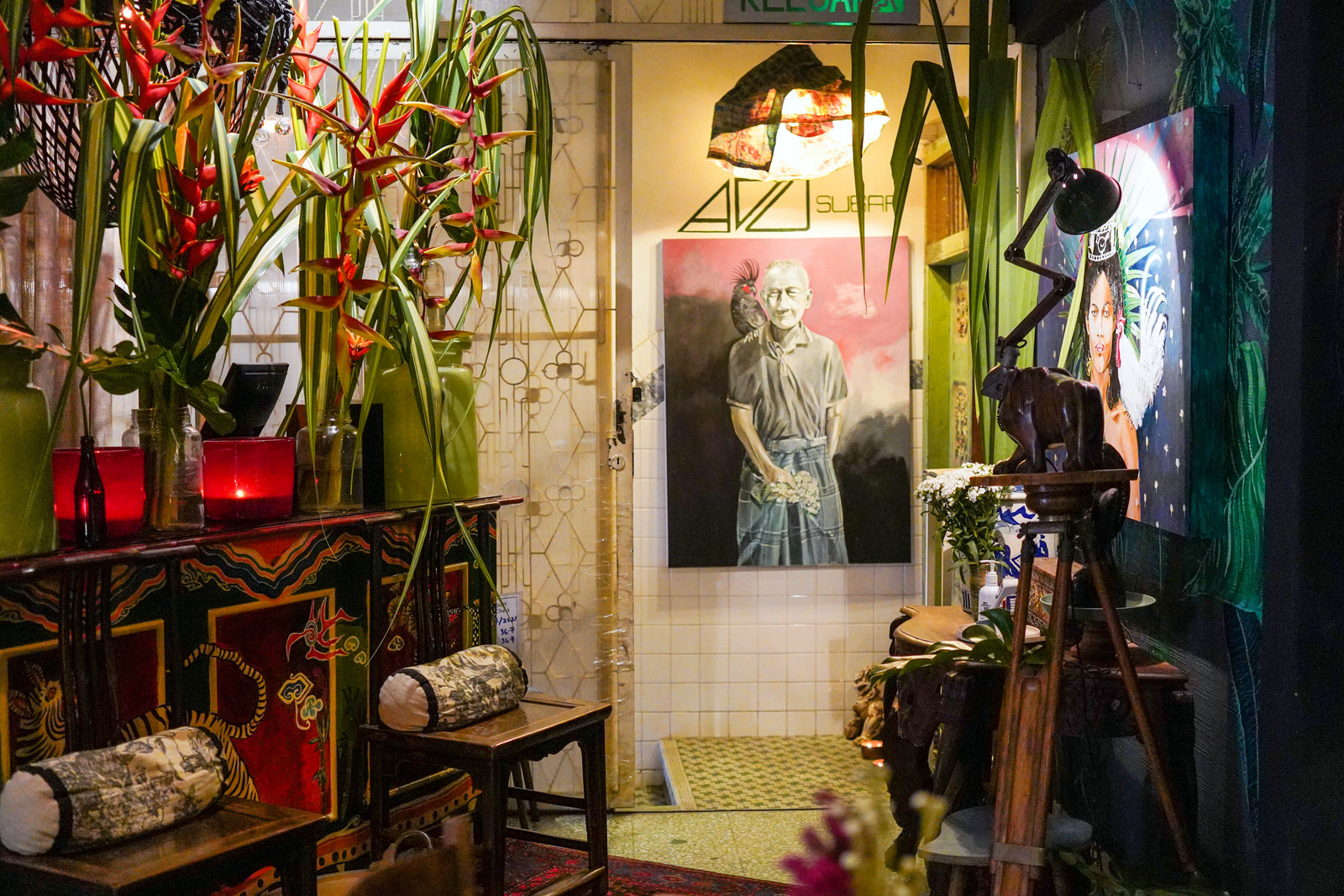