Le Cordon Bleu Malaysia: From the South of France to the Grand Diplôme 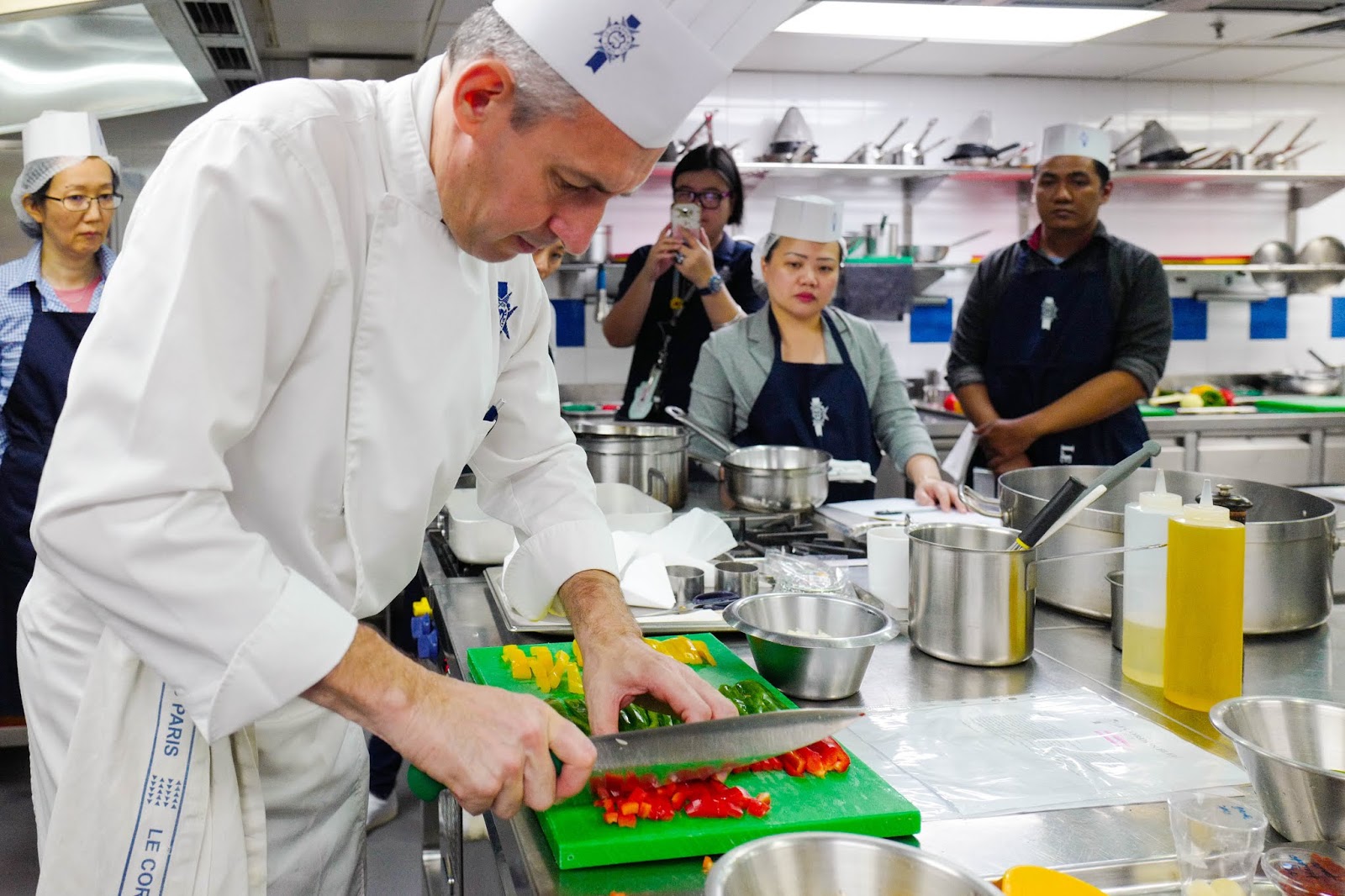 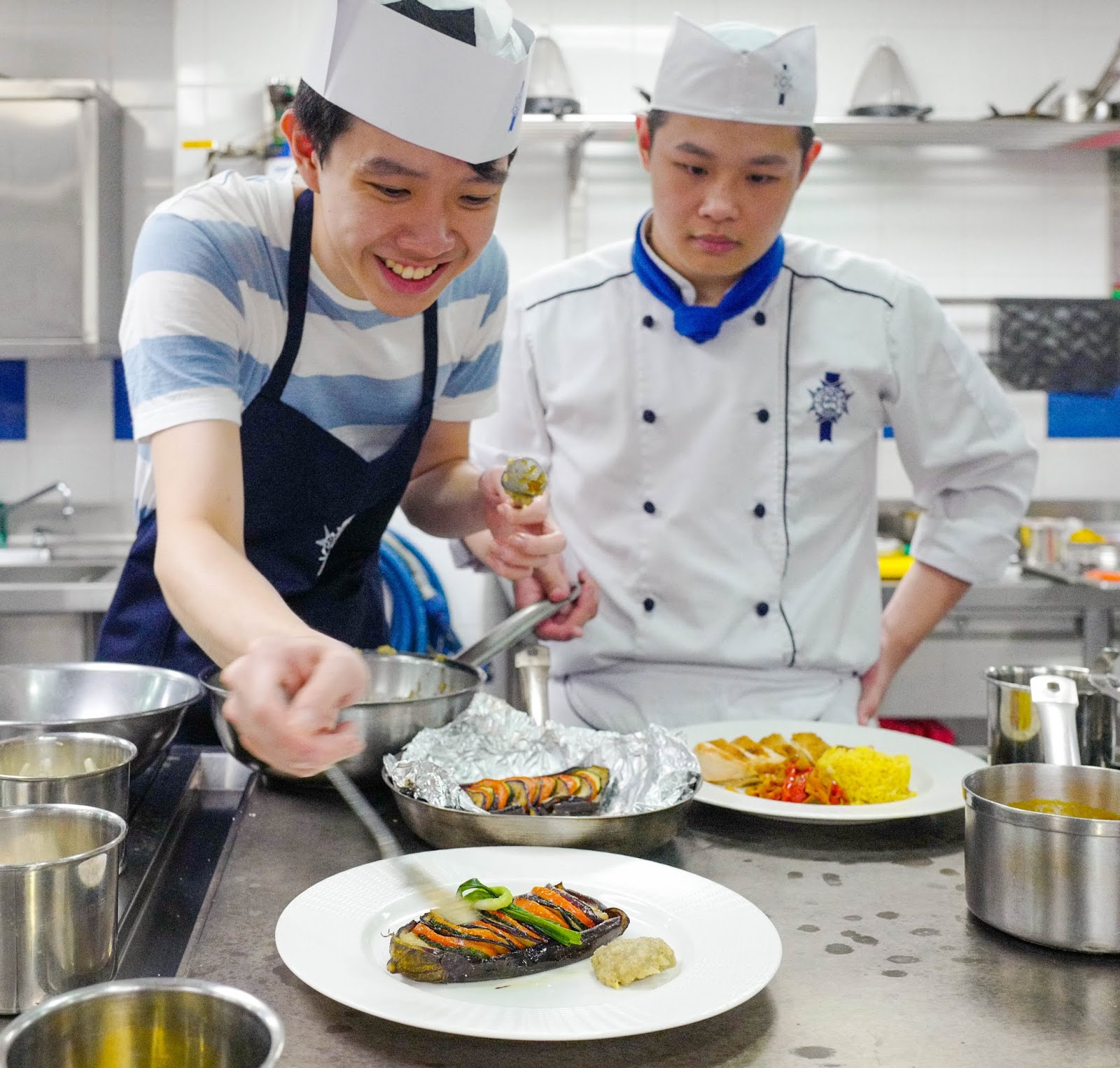 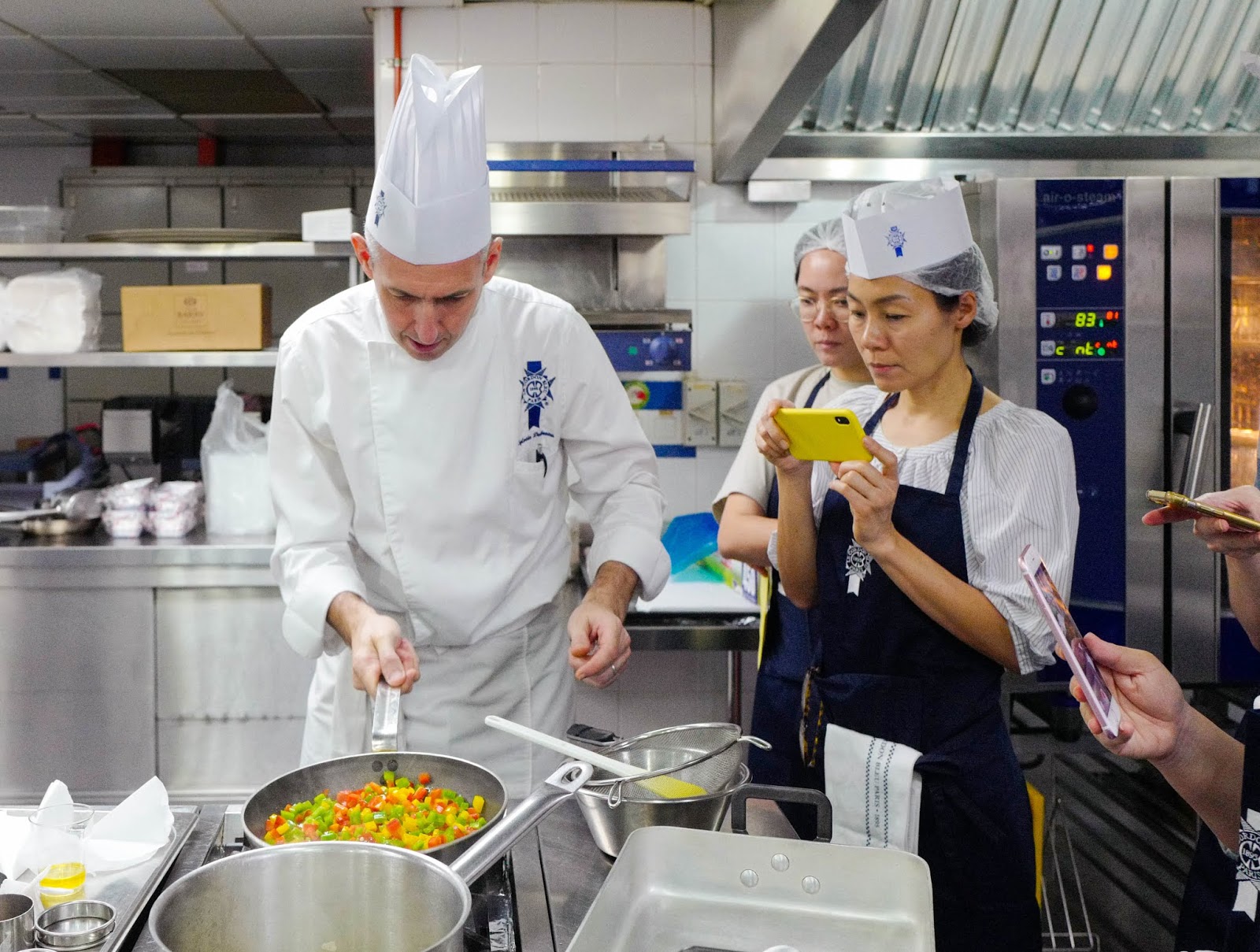 From a home cook’s perspective, I harbour curiosity and admiration for the intricacies of French cuisine, often watching French recipe videos in my free time. I've long been familiar with the name Le Cordon Bleu, which is synonymous with French cooking worldwide, its blue ribbon a bulwark of skill and tradition.

Le Cordon Bleu Malaysia, located in its partner college in Sunway, offers diploma programmes that have nurtured many of Malaysia's exciting chefs, but its variety of short courses ensures opportunities for home cooks as well as anyone interested to learn from the renowned institute. A recent South of France Dishes workshop was one example, taking a mere four hours to instruct participants on recreating the Gallic region's vibrant flavours of Ratatouille Nicoise, Provencal Vegetable Bayaldi and Basquaise Chicken. 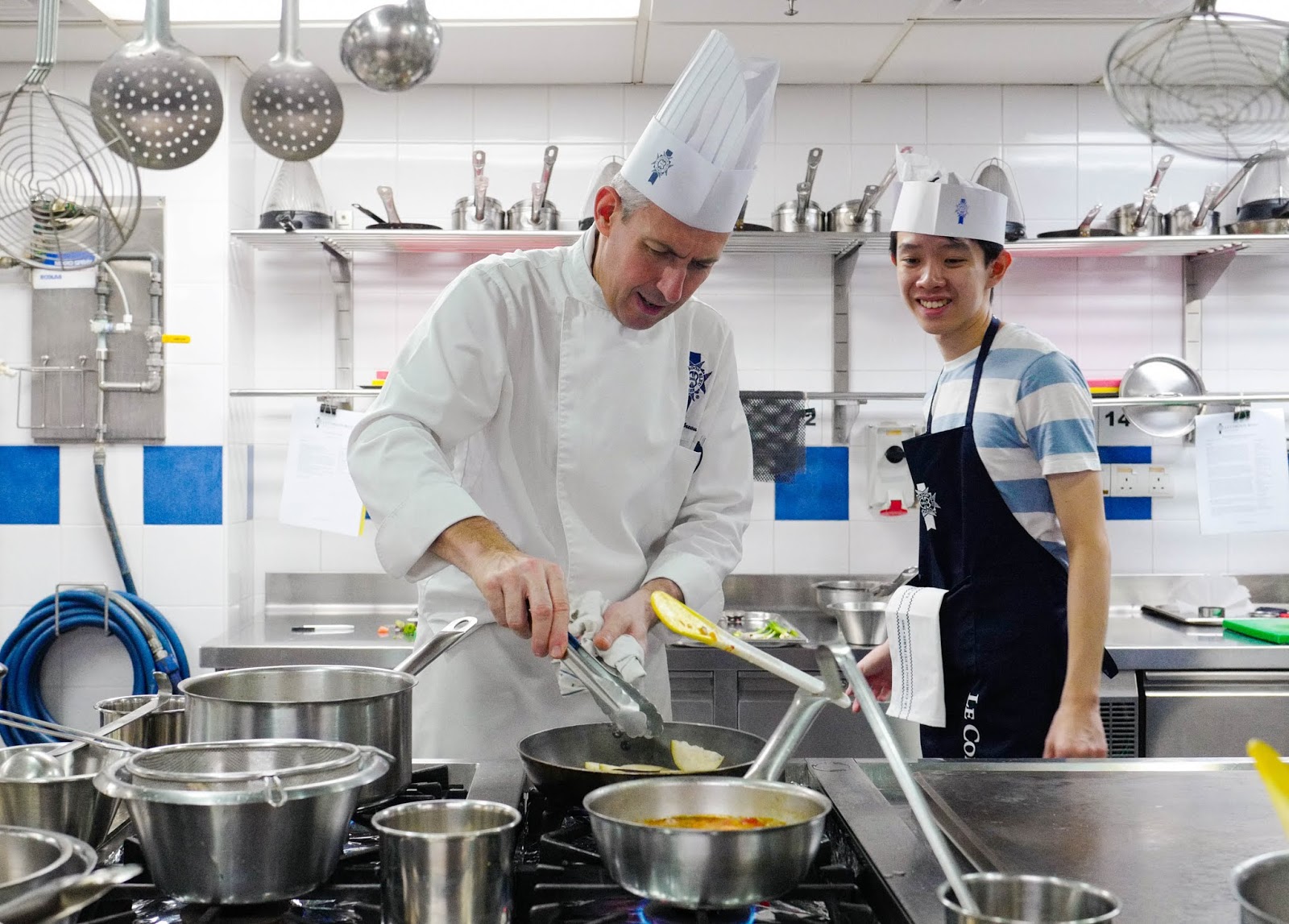 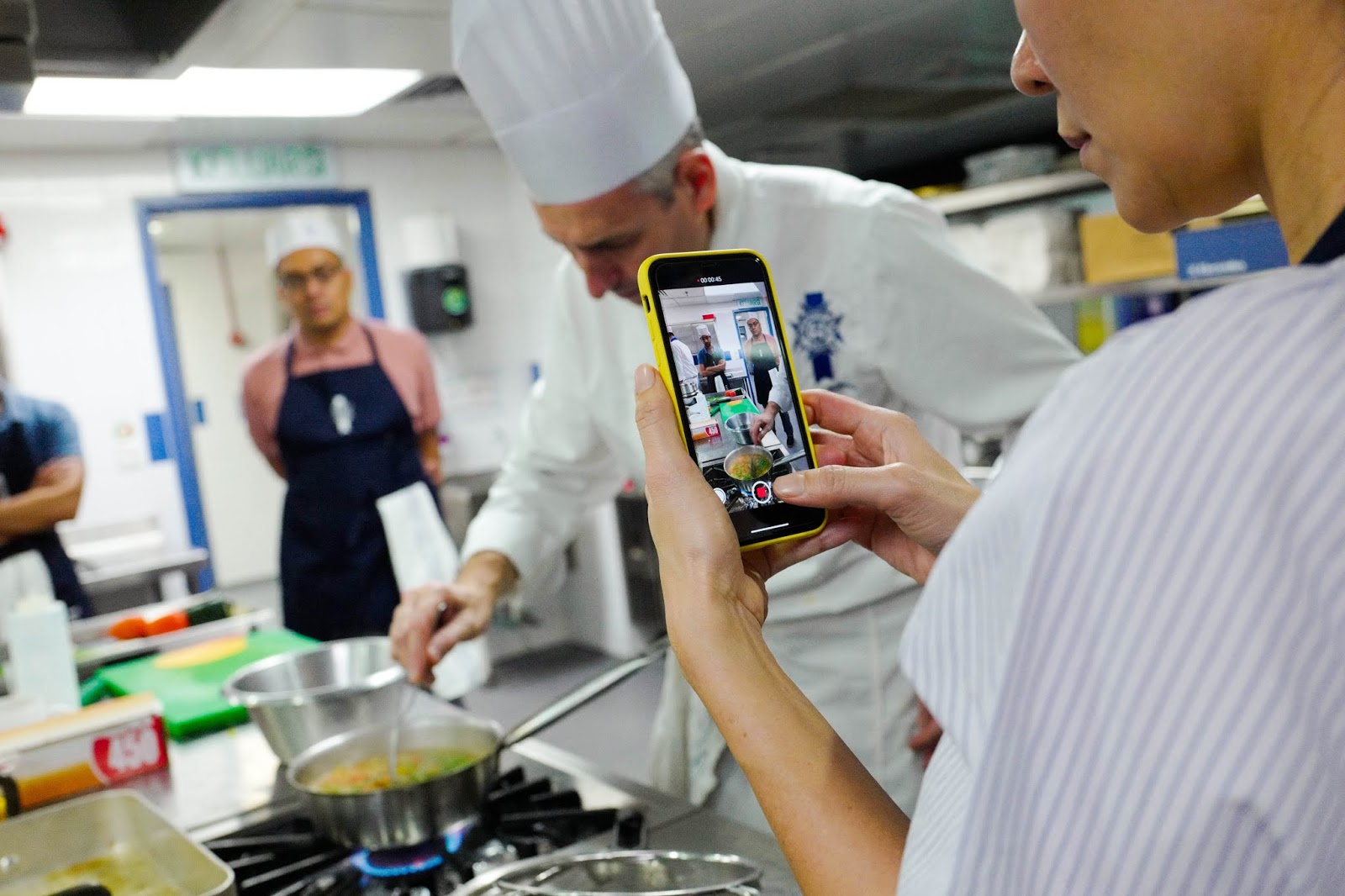 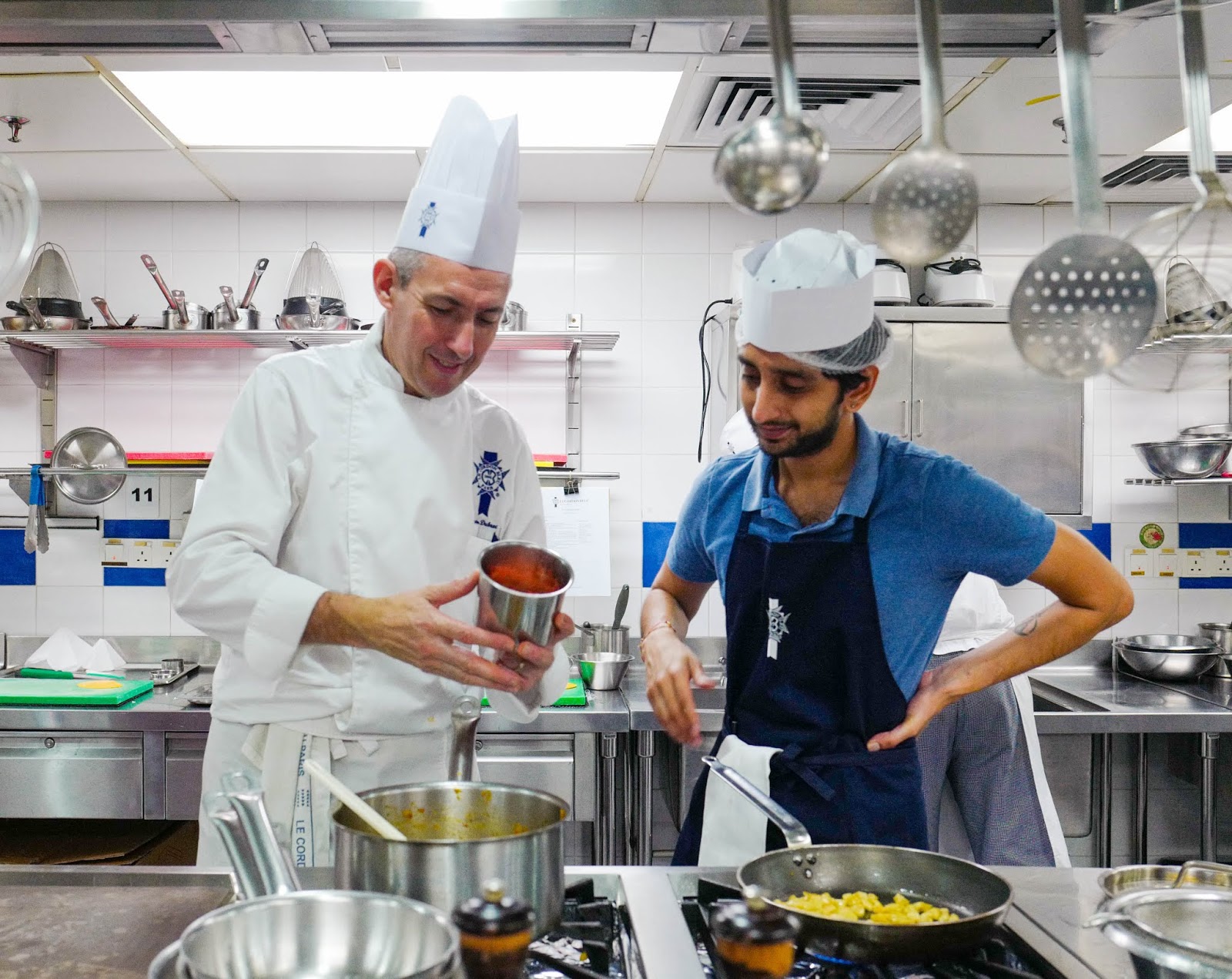 Cuisine Chef Instructor Sylvain Dubreau, who has cooked professionally since the age of 16, provided a steady hand in our learning - the veteran who has manned Michelin-starred kitchens in Paris, with two assistant chefs, led a small group of about 10 participants eager to devour the lessons. Each participant received a welcome pack that included written recipes of the course’s dishes, other information about Le Cordon Bleu, as well as an apron and hat for our practical hands-on session in a professional kitchen used by full-time culinary students (fun fact: the room was named Pellaprat, in honour of French culinary luminary Henri-Paul Pellaprat).

The kitchen is a dream, impressively equipped with all the high-quality equipment imaginable, certainly a far cry from my humble home kitchen. The ingredients needed for each recipe were prepared in exact amounts at every station, taking away the stress of measuring to allow more time for learning. 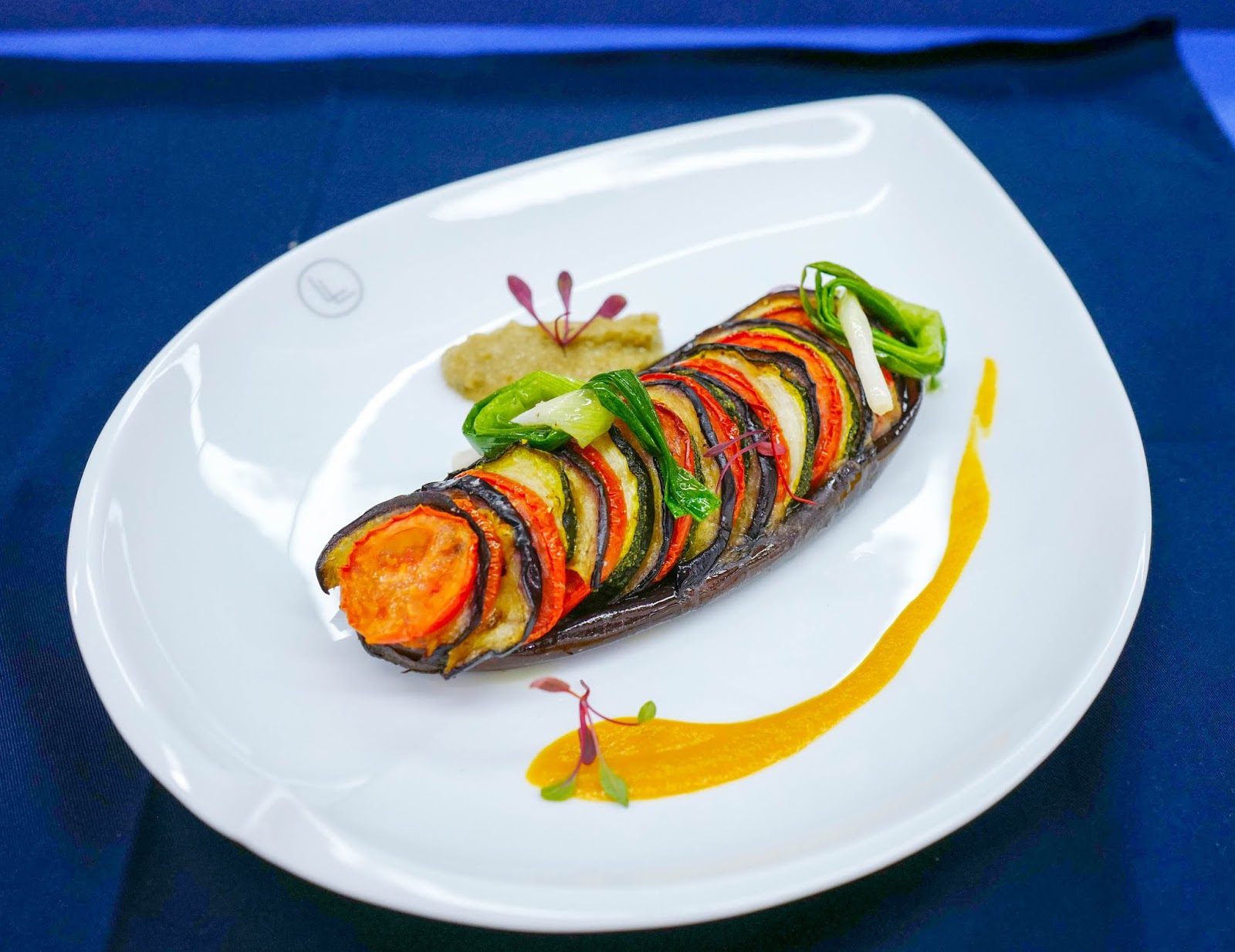 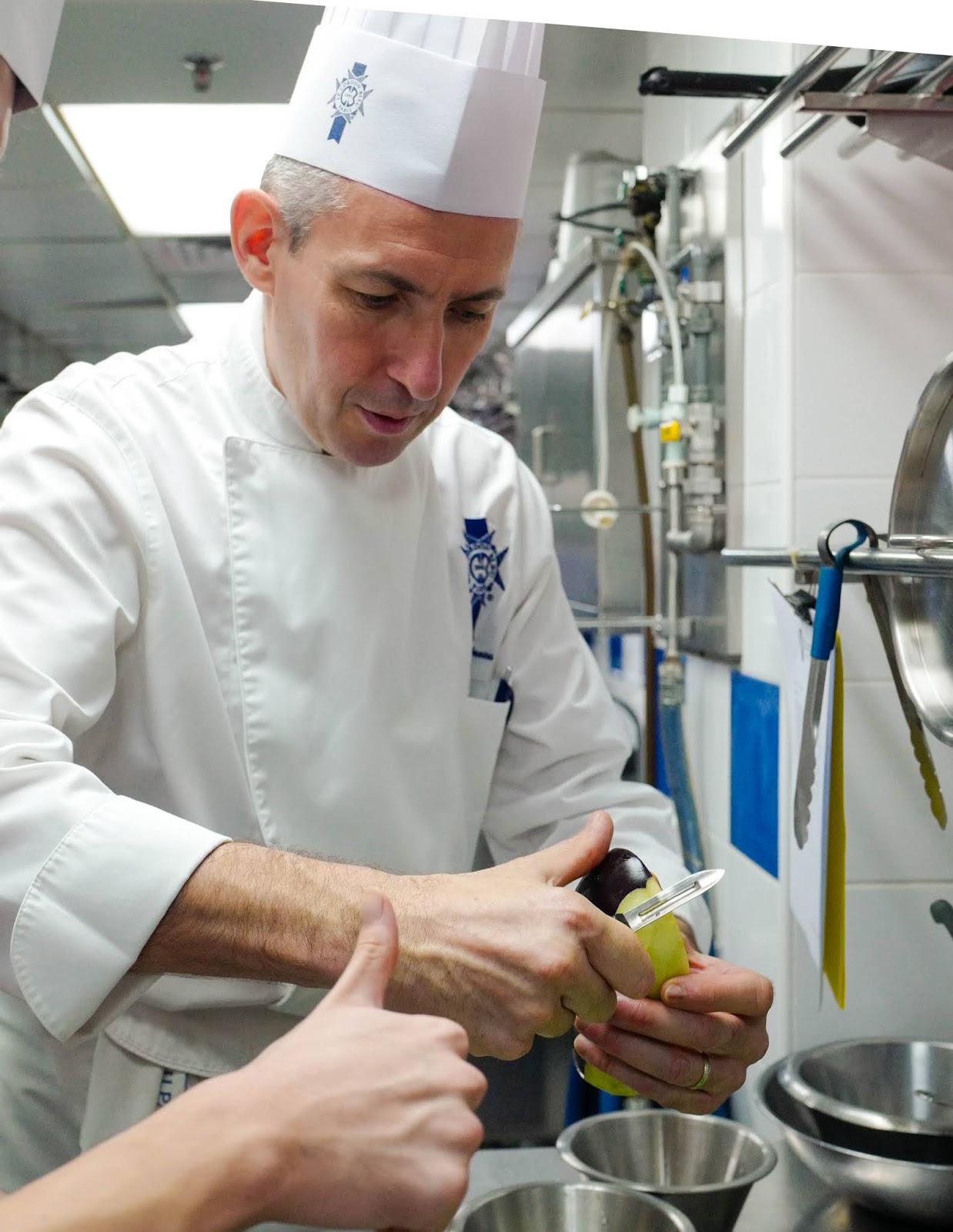 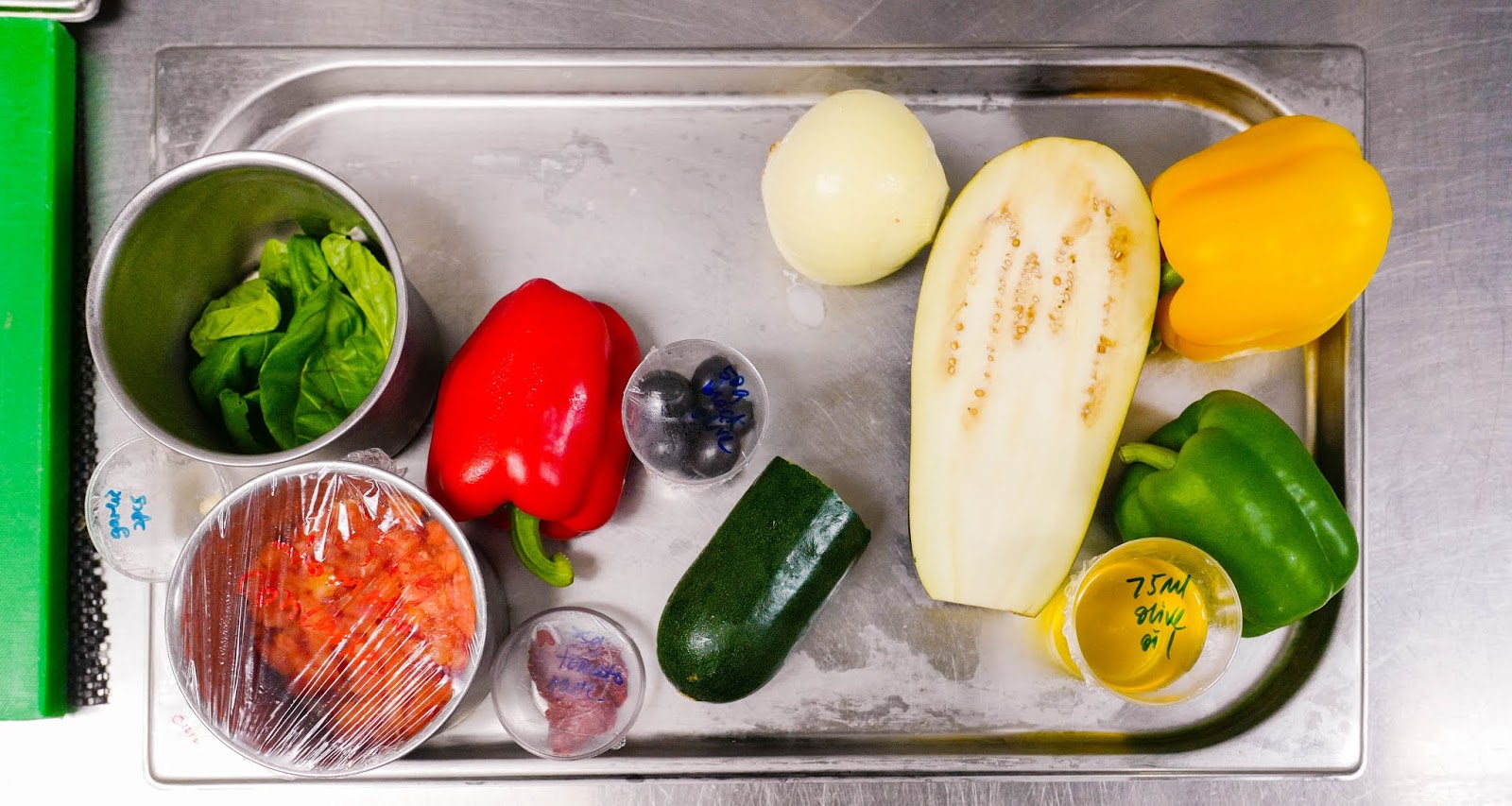 First up was the ratatouille, a vegetable stew brought to mainstream attention by the popular Pixar animated film of the same name. A colourful array of vegetables had to be diced: bell peppers of all three colours, onions, zucchini and eggplants. Before executing every major step of a recipe, Chef Sylvain gave us a demonstration, on this occasion showing off his impeccable knife skills in cutting the vegetables. The next step was crucial: the diced eggplant had to be soaked in salt water for 30 minutes, then squeezed to extract any liquid. The vegetables were then slow-cooked with tomato paste and puree under a cartouche (a circle of parchment paper used to cover the contents of the pot). The chef is particular about hygiene, offering instructions on how to clean our used pots and pans. 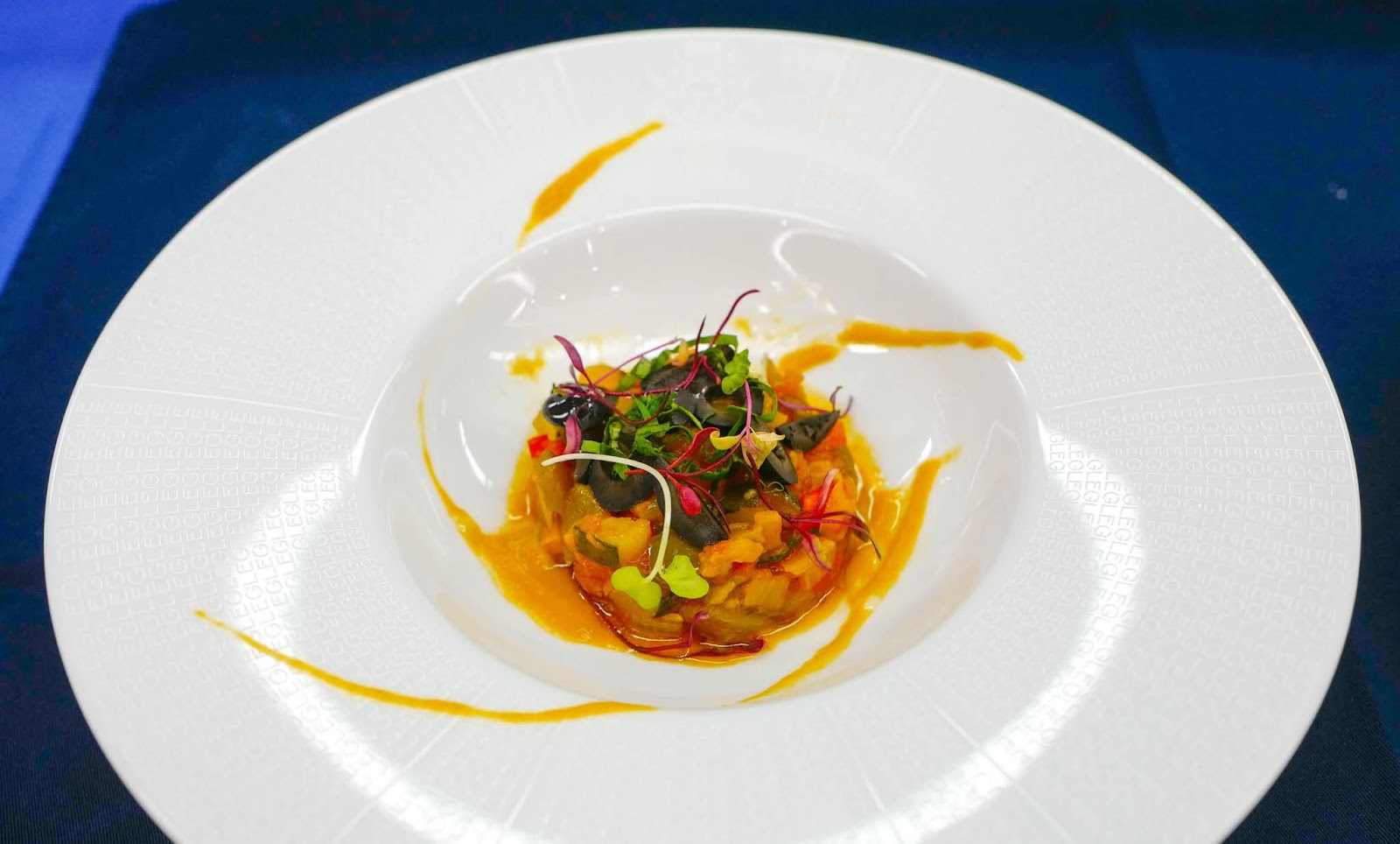 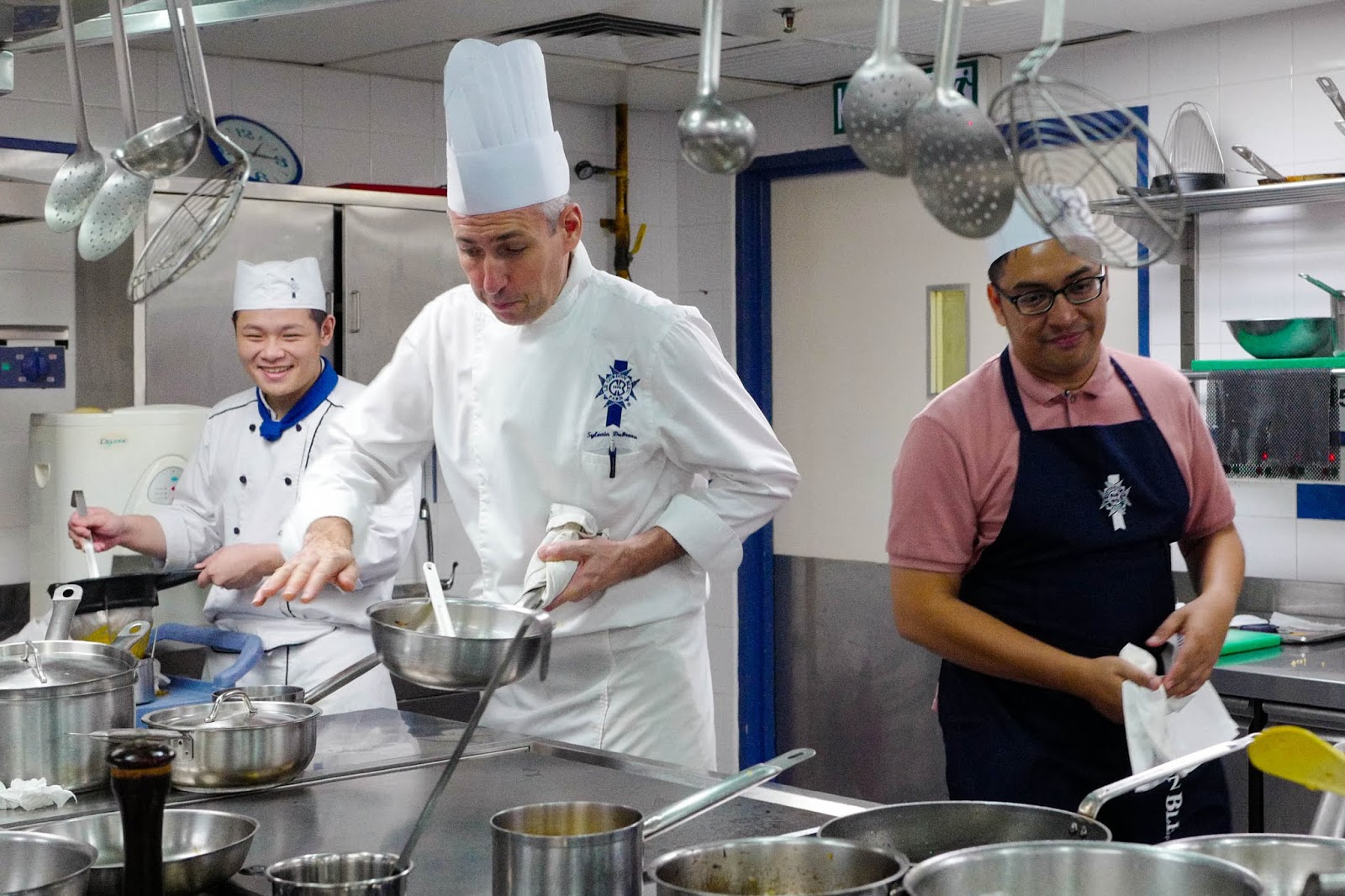 The bayaldi was the most fun to prepare, evidently a test of our knife skills. Incisions had to be made on the flesh of halved eggplants, carefully so as to not slice through the skin. Chef Sylvain explained these key details, telling us that any damage to the skin could jeopardise the structural integrity of the eggplant skins once baked.

The next test was meticulously slicing eggplants, zucchini and plum tomatoes into a specific thickness that had to be layered on the eggplant skins. This step was a challenge for me, an amateur lacking the dexterity demanded of French cooking, but repetition slowly led to improvement, and a compliment from Chef Sylvain about my final product was sweet validation.

The accompanying Provencal coulis was a break from the strict specifications of the bayaldi. “It doesn’t matter how big you slice the peppers. It’ll all be blended up anyway,” Chef Sylvain remarked while I breathed a sigh of relief. 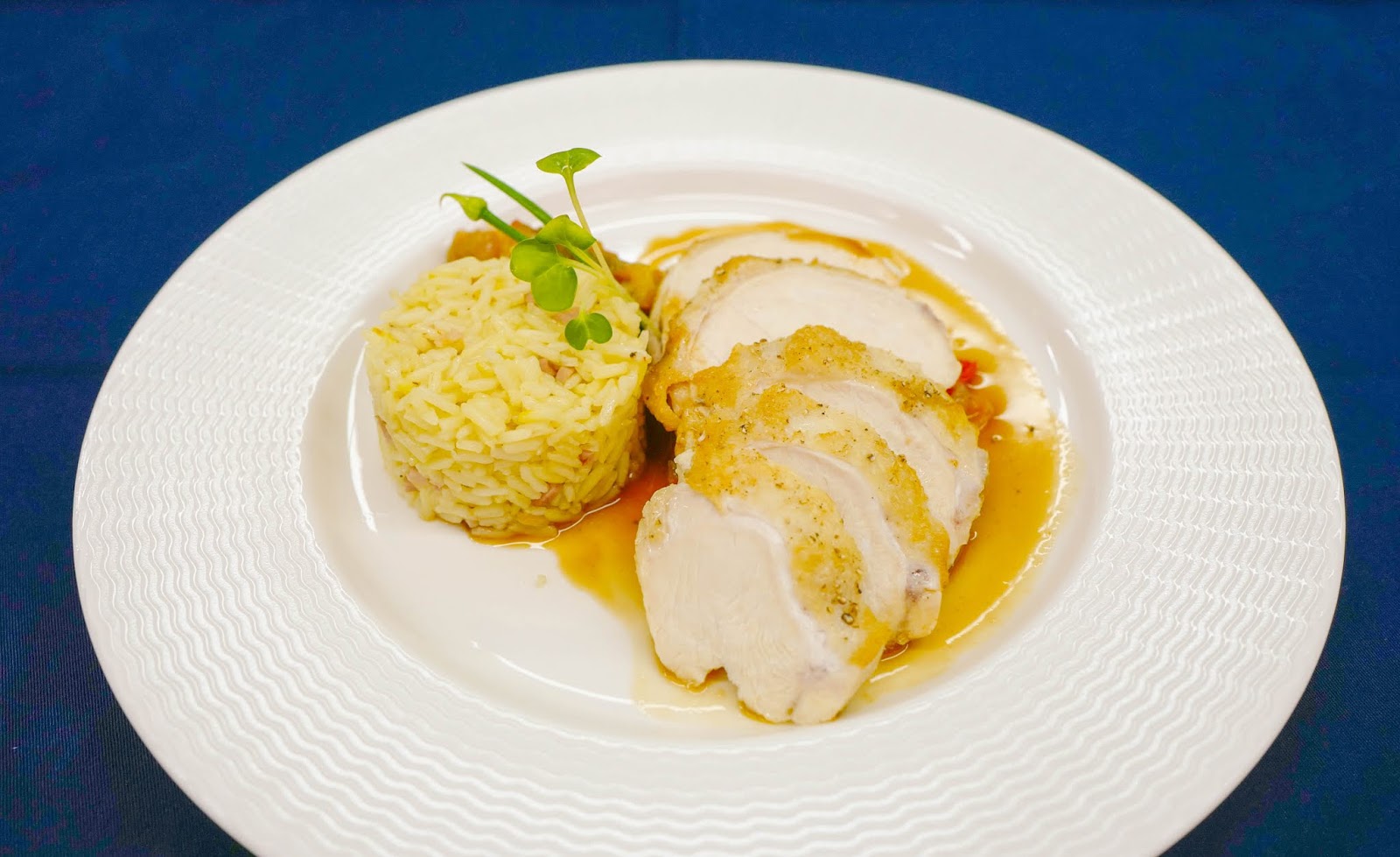 Basquaise Chicken came next, saving the most difficult one for last. The dish itself had four components, with the sauce prepared by Chef Sylvain, leaving the rest to us. I felt a reassuring sense of familiarity seeing a rice component, something I learned to cook as a child.

Cover the rice with water using your finger as a guide and prepare in the rice cooker. Easy-peasy? Non! The braised rice required new techniques to execute, an exciting learning opportunity to produce superior rice. The uncooked rice had to be sautéed with sweated onions till a crisp popping sound is heard, then covered in saffron-infused chicken stock (an upgrade over plain water) and cooked in an oven with a cartouche.

The learning process involved in making the rice summarises the essence of the workshop: the ingredients before you might seem typical, but where you are led to with them is so unconventional compared to what you’d usually do (for someone who doesn’t cook French), opening up a new world of flavours, textures and culinary enlightenment. 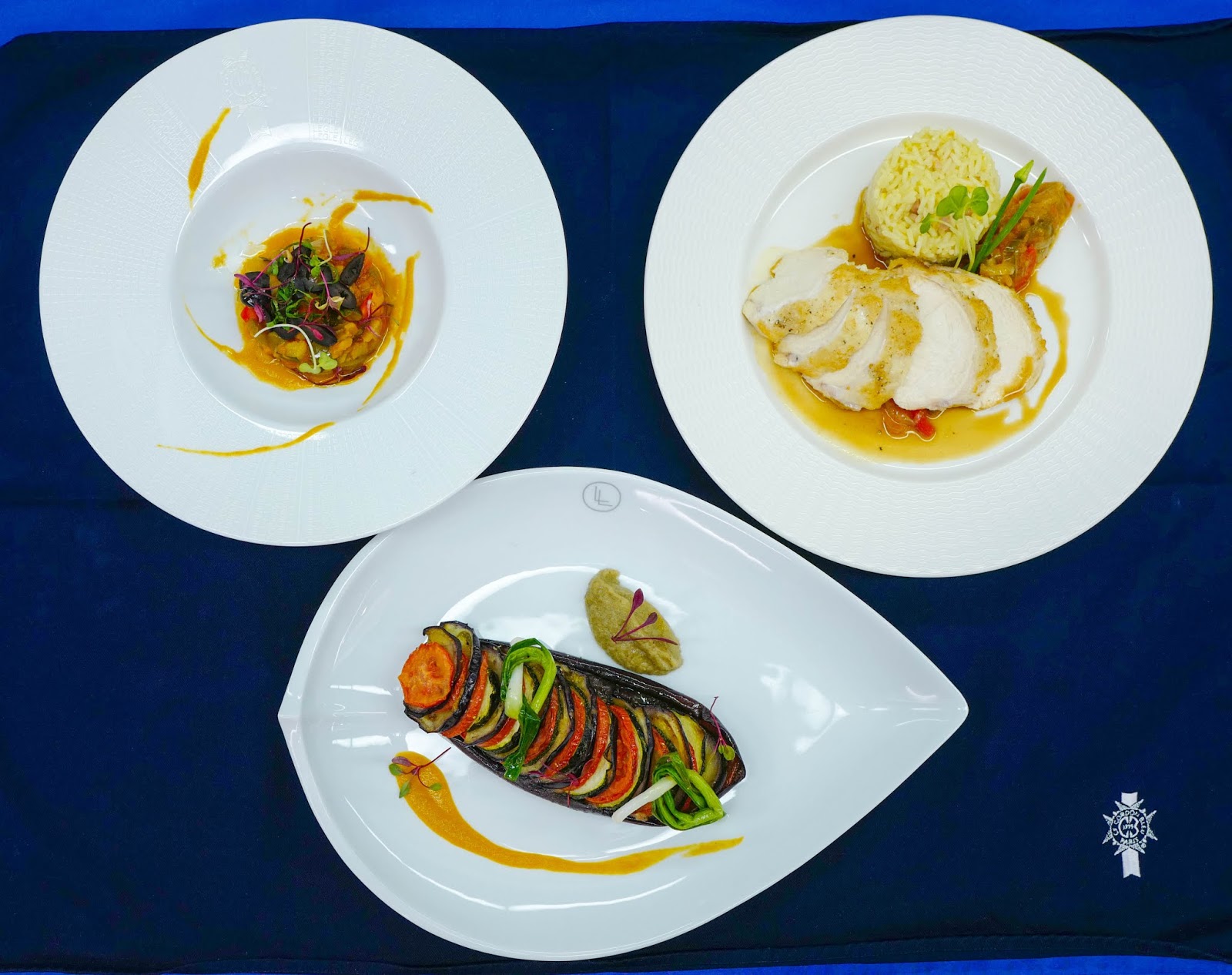 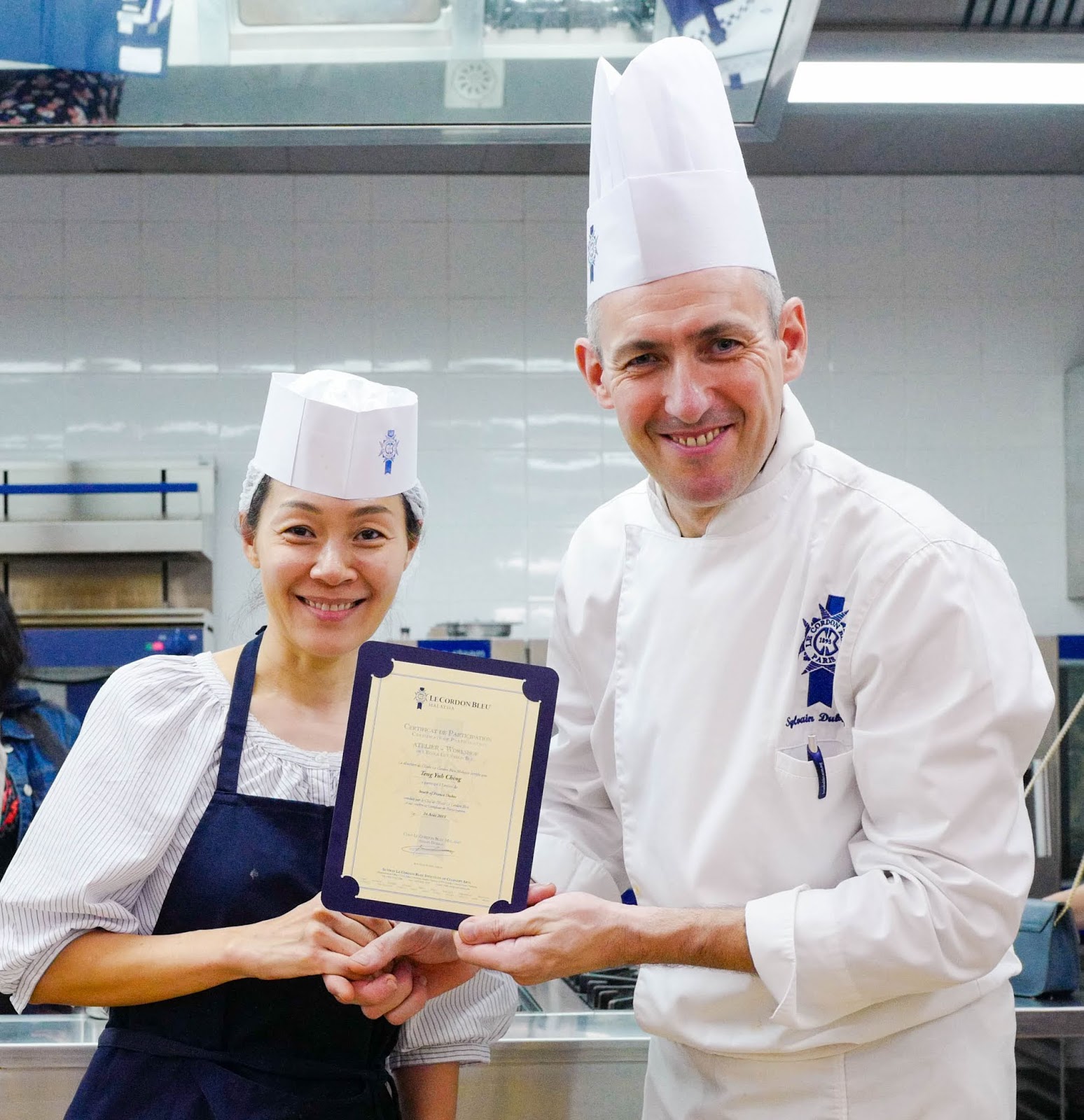 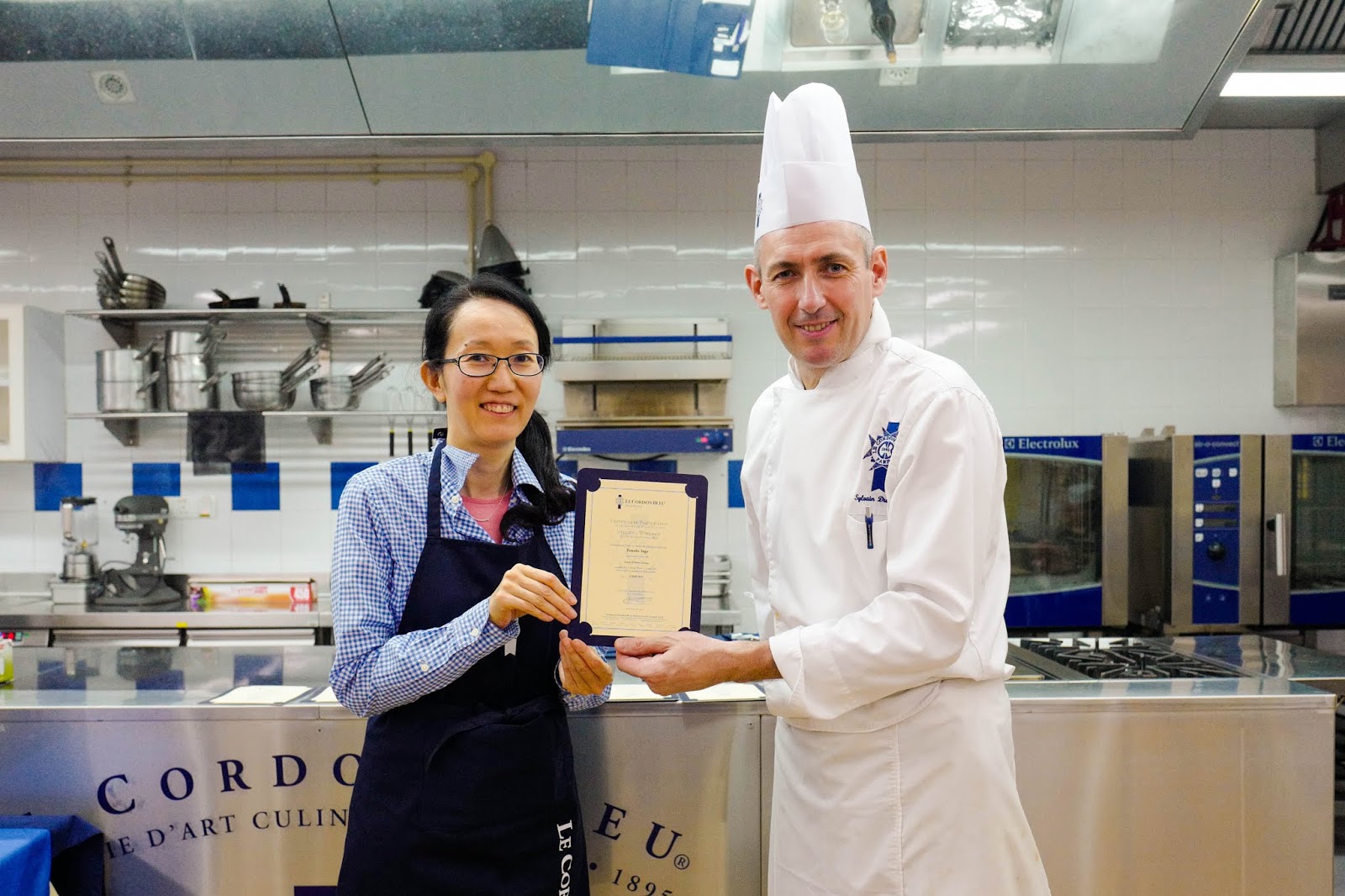 The workshop is uplifting, with the stress of Chef Sylvain’s calls of “cepat, cepat! panas” balanced by his pats on your back to tell you that you’re doing great. The chef is fast to offer advice on how to avoid errors and fix them if they occur; he also introduces each ingredient and utensil one by one, explaining their uses clearly.

The participants around you come from diverse backgrounds and are willing to lend a hand when you’re confused on what to do next - the people I met included a man who received this workshop as a gift from his wife, and a woman who was attending her first Le Cordon Bleu workshop after learning that the institute has a Malaysian chapter.

A true highlight of the workshop was a front-row view watching Chef Sylvain at work. He has an undeniable flair in his cooking, making his plating skills a spectacle indeed. The dishes prepared were traditionally rustic fare, but the chef elevated them to dishes worthy of fine-dining establishments. 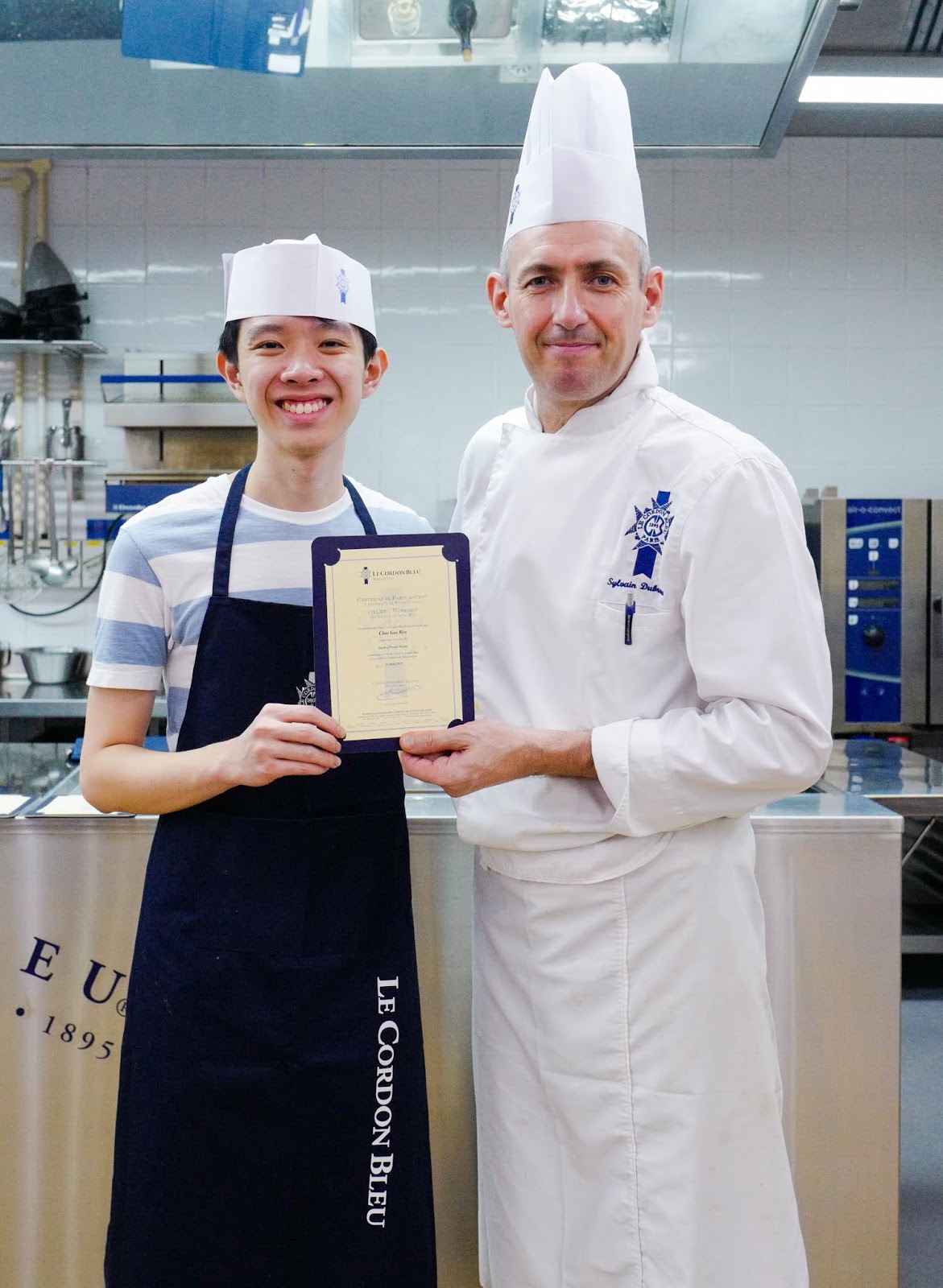 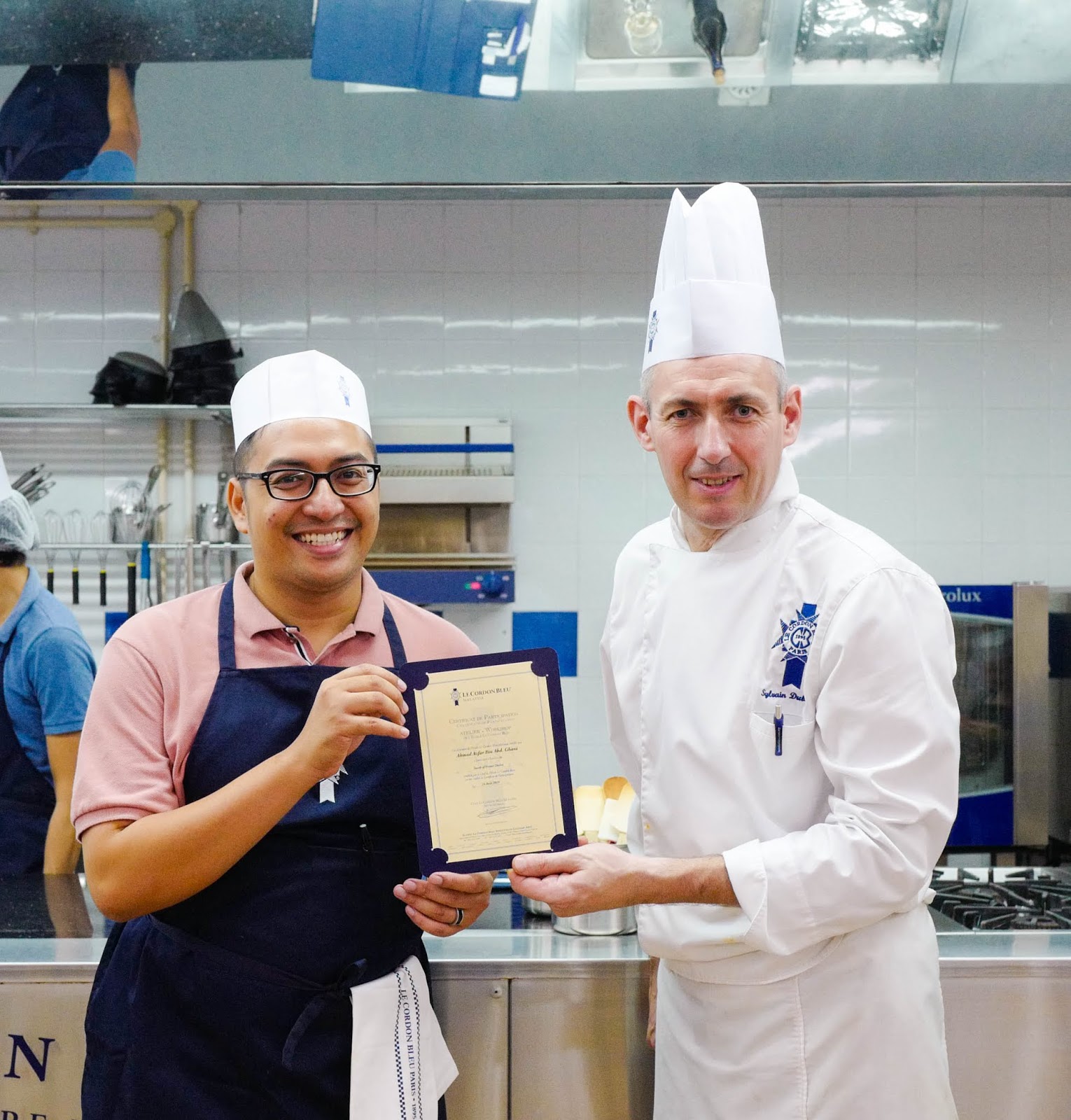 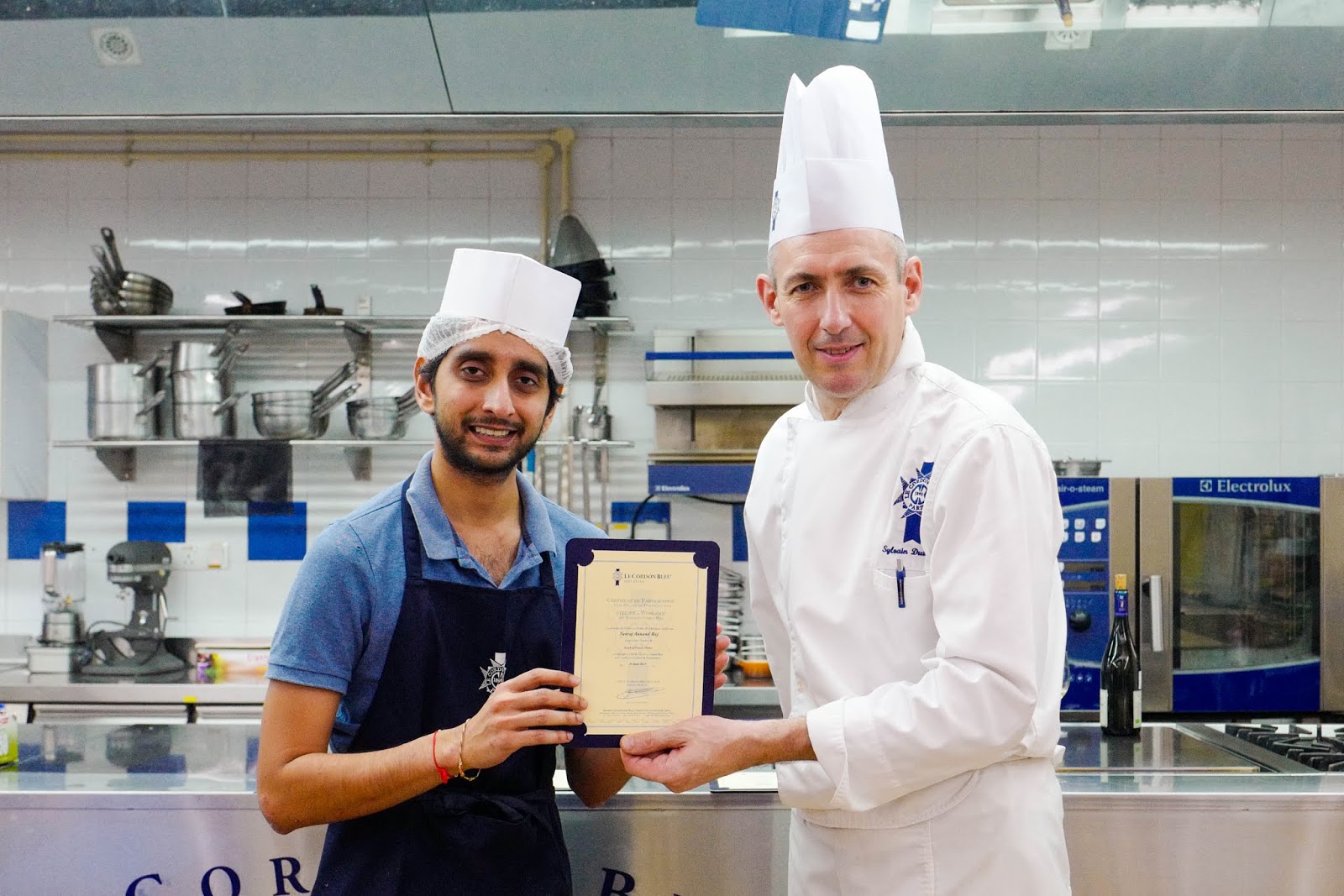 These workshops are a clarifying gateway for those interested in taking up Le Cordon Bleu’s diploma courses. Le Cordon Bleu Malaysia is a conducive environment to pursue your culinary dreams - mentored for a few hours by an esteemed chef, immersed in a professional kitchen, I personally acquired newfound veneration for the art that the French make out of their food, leaving an indelible mark on my cooking experience.

Le Cordon Bleu has four intakes a year, in January, April, July and October, for its nine-month-long Culinary Arts Programmes - these range from the Grand Diplôme (an influential qualification combining classical training in both cuisine and patisserie) to the Diplôme de Cuisine and Diplôme de Pâtisserie. Click here to find out more.

Many thanks to Le Cordon Bleu Malaysia for this peek into its kitchens. 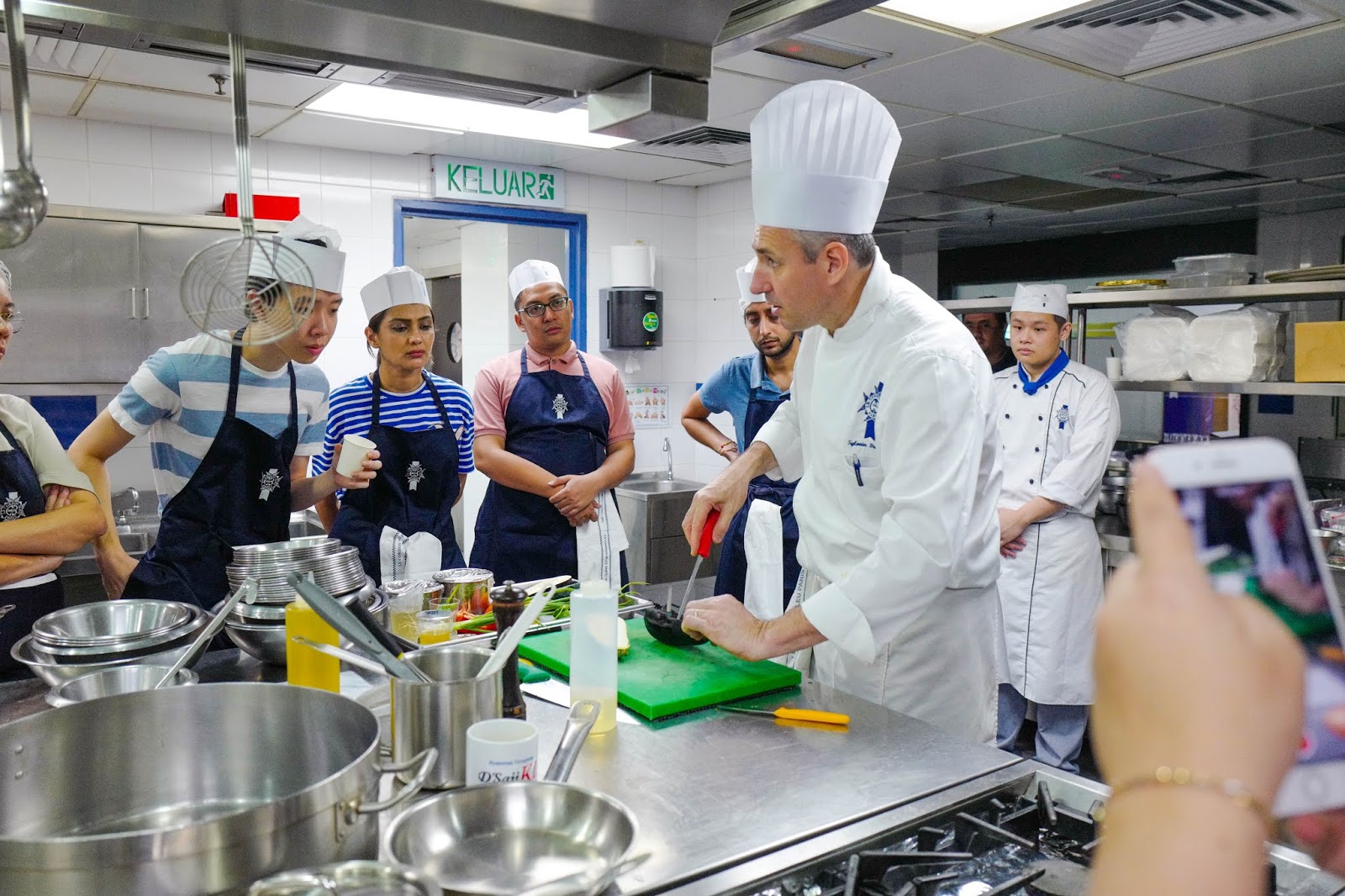 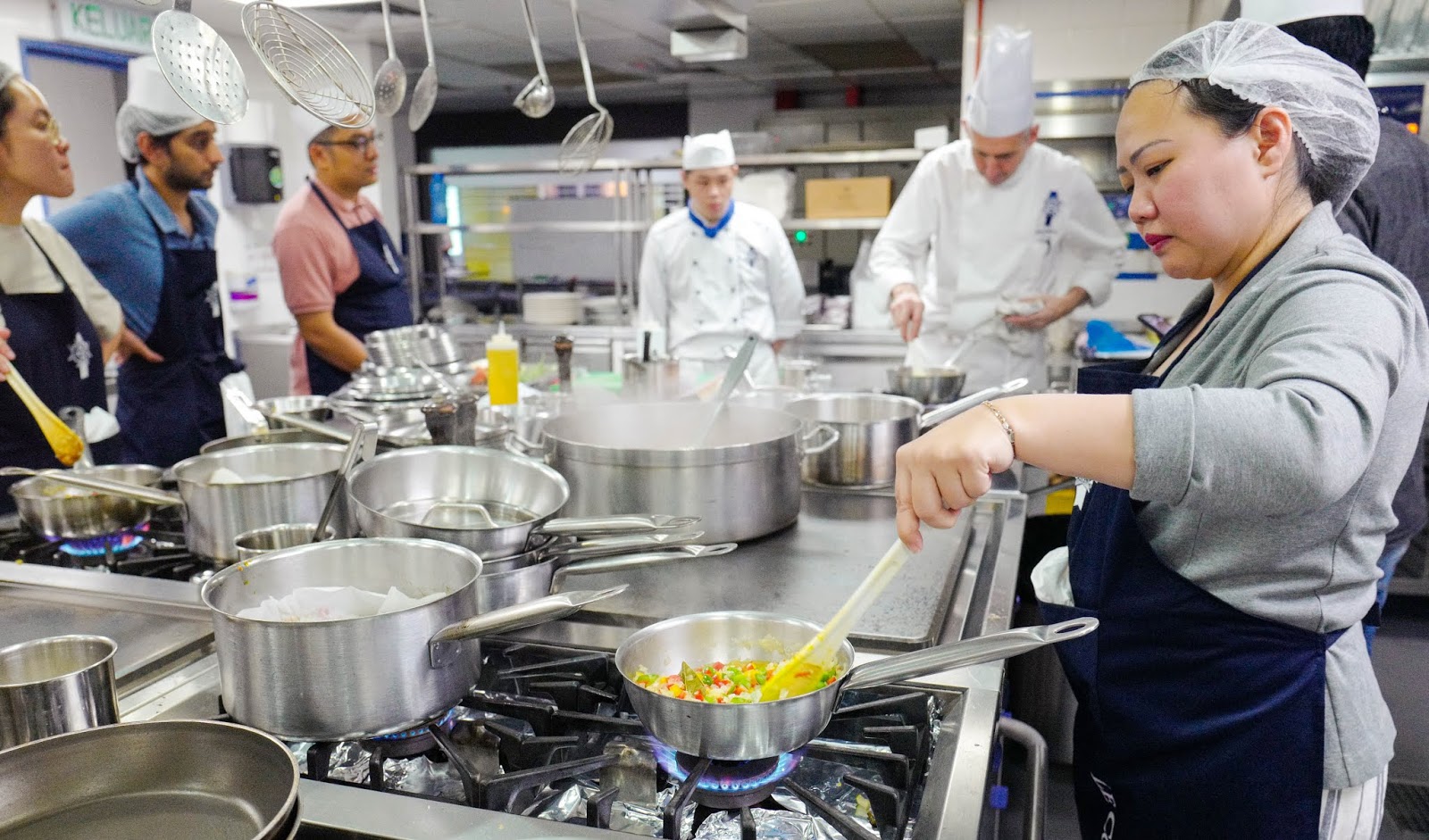 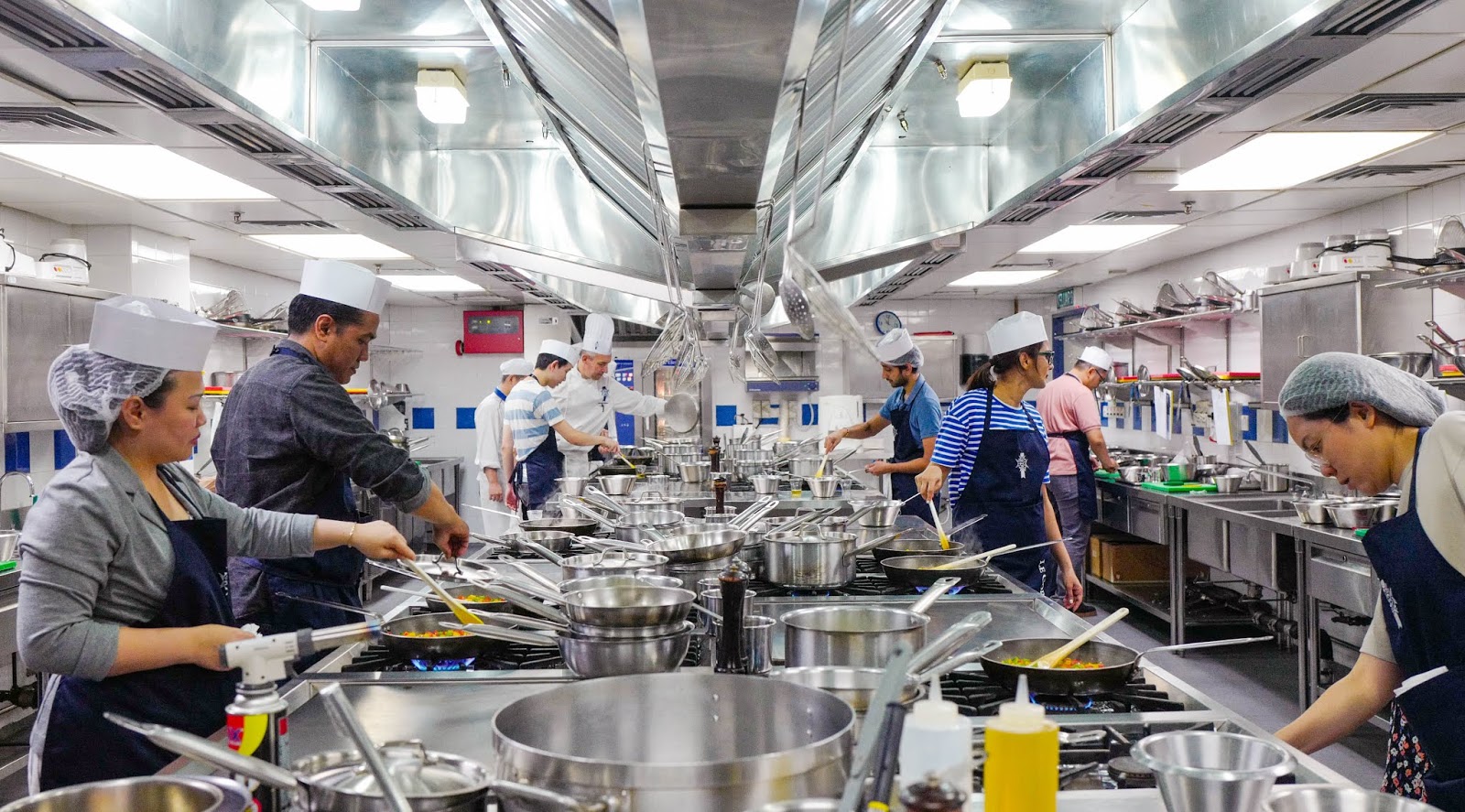 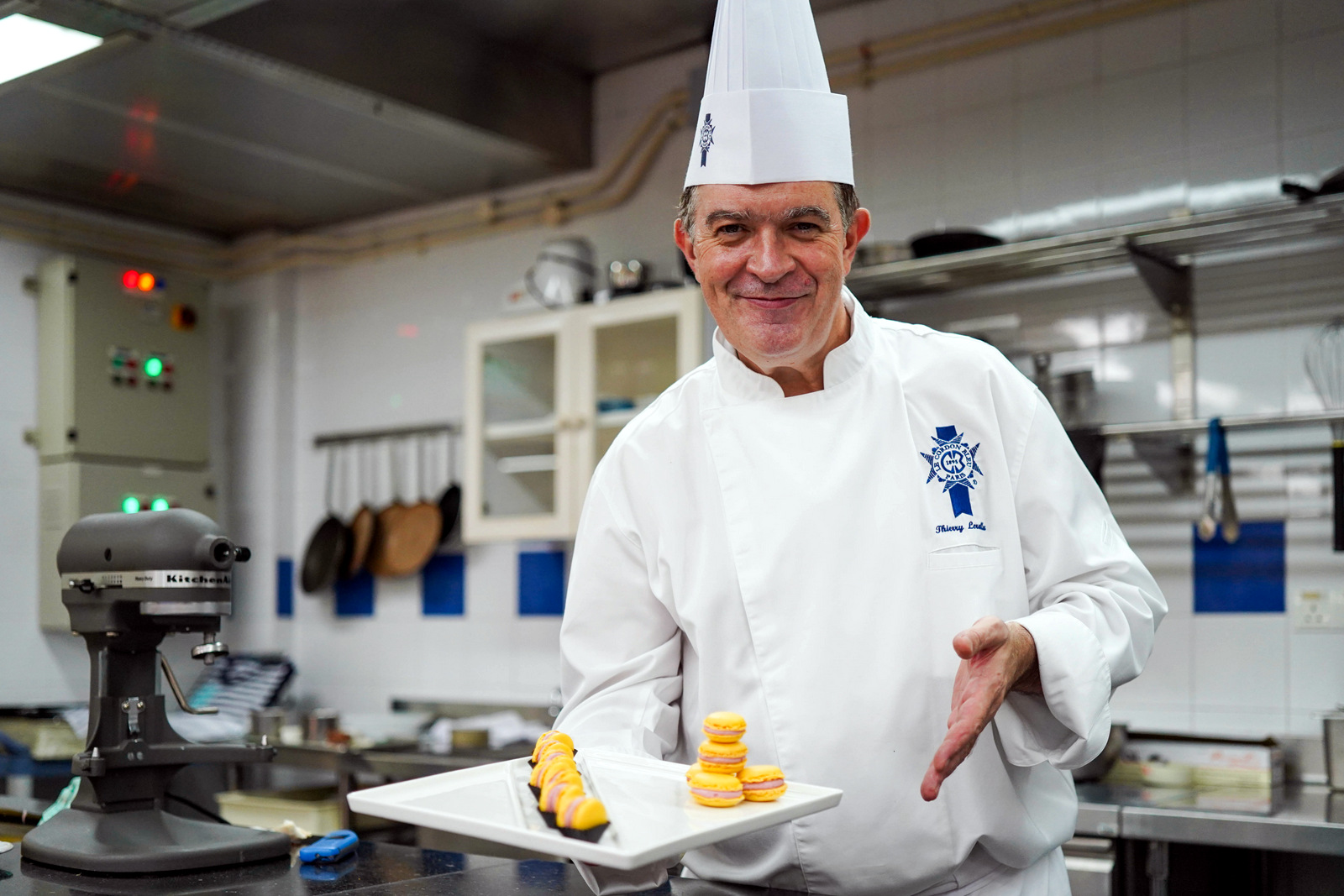 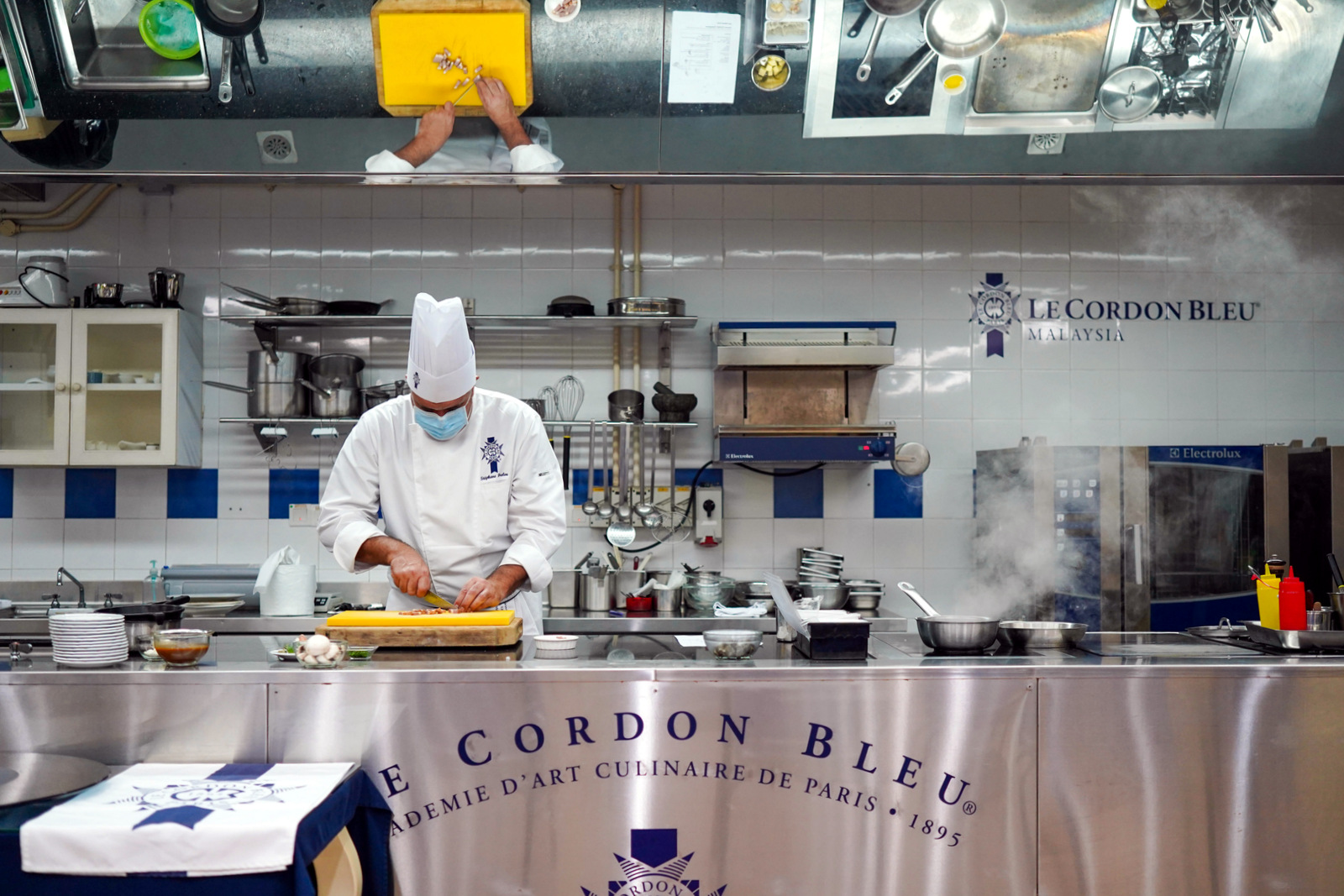 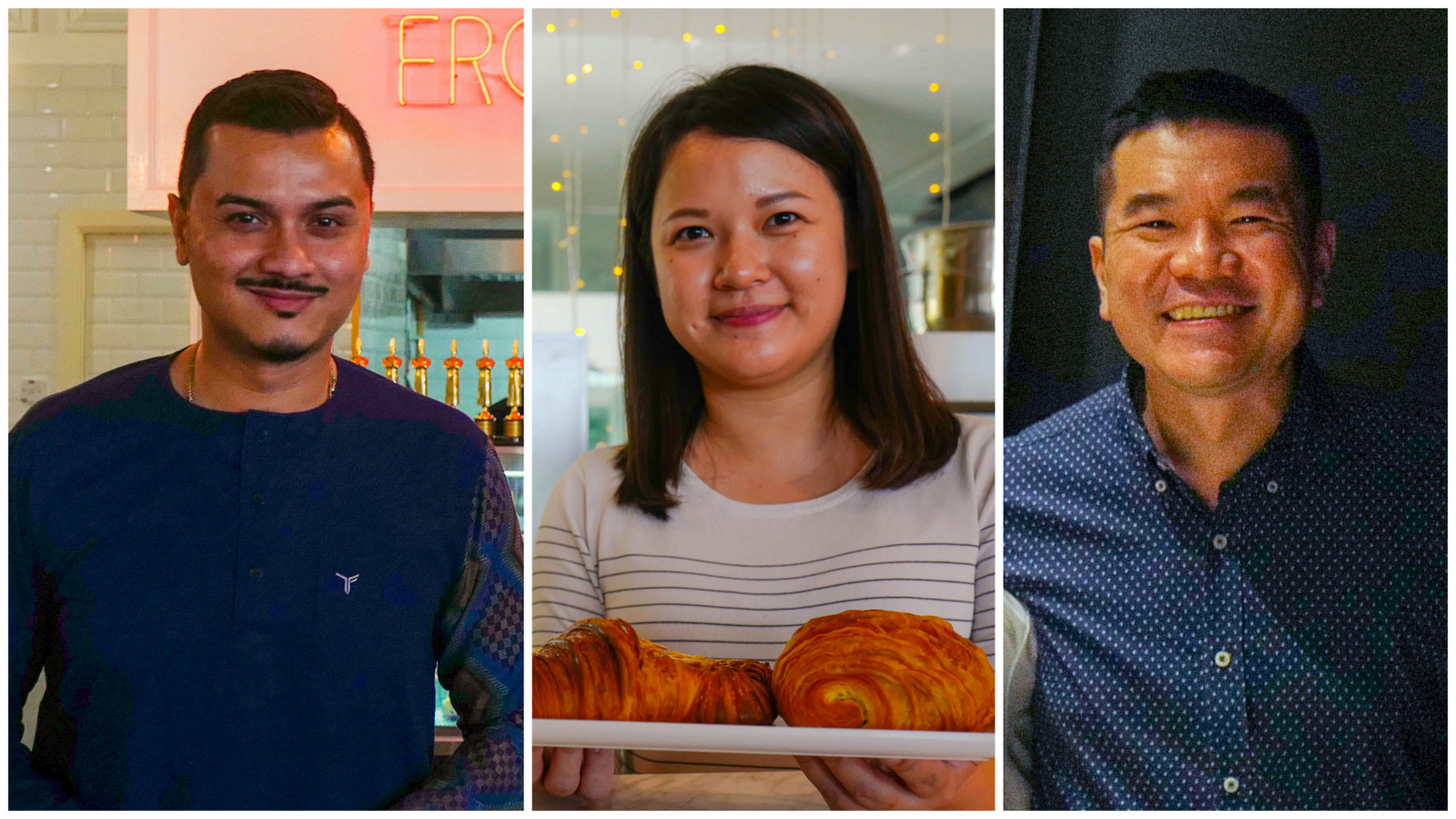 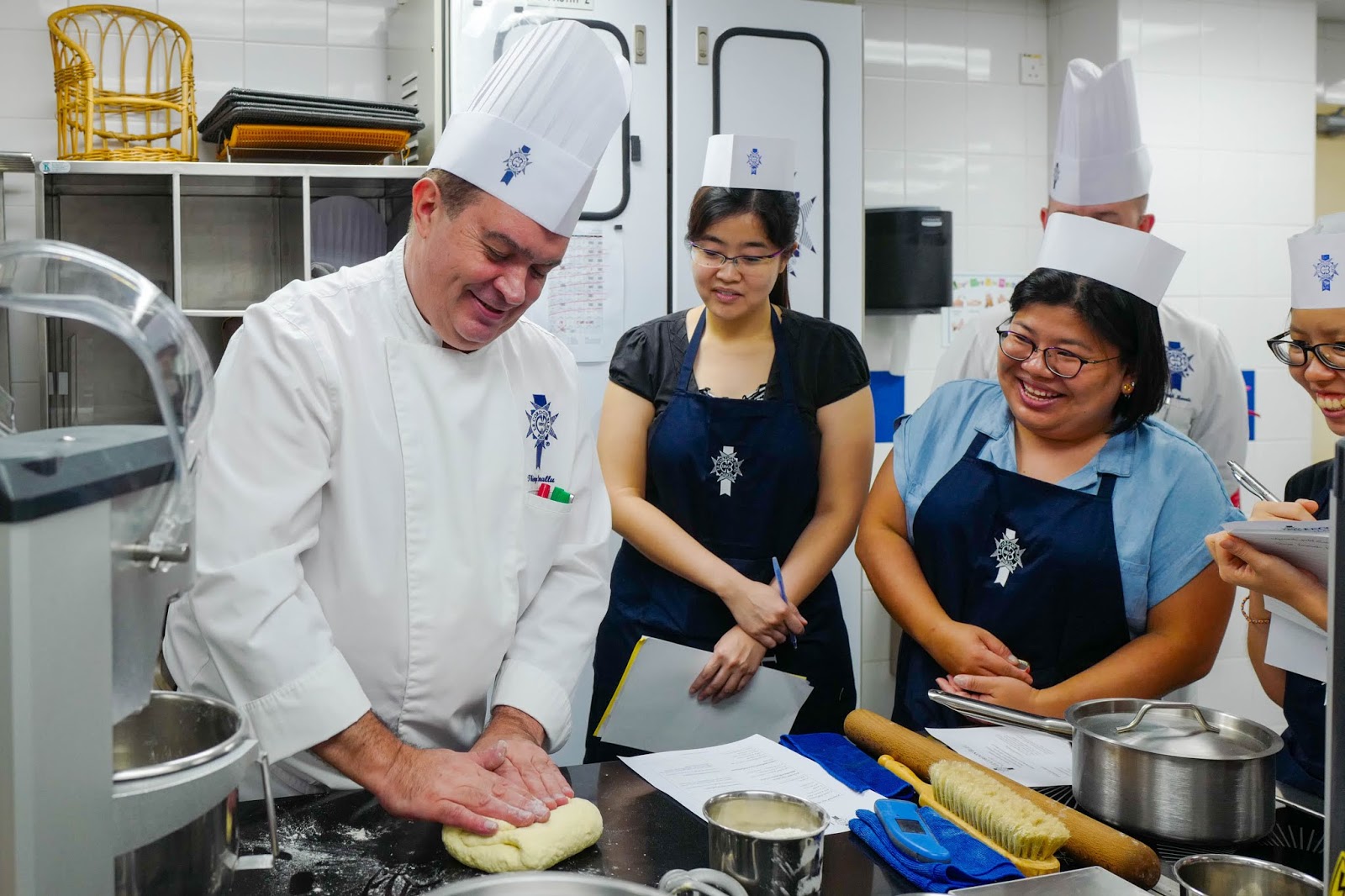 A Day in a Le Cordon Bleu Malaysia Workshop